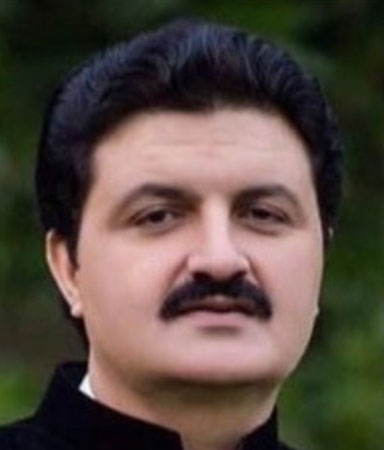 Adviser to Khyber Pakhtunkhwa Chief Minister on Information Ajmal Wazir was removed from his post, a notification from the provincial government said on Saturday.

Kamran Khan Bangash has been given the additional charge of the portfolio of Information and Public Relations in addition to his office of Special Assistant to the Chief Minister on Local Government, Elections and Rural Development.

According to the government notification, Wazir was ‘relieved and denotified’ with Bangash given the additional responsibility in his stead.

The development came as Wazir was accused of accepting a commission from an advertising agency after a leaked audio recording surfaced. An inquiry into the allegations has been ordered by the KP chief minister. “Chief Minister Khyber Pakhtunkhwa has desired to process a case for a fact-finding inquiry into the recently surfaced audiotape of Ajmal Khan Wazir, former advisor to the chief minister for information and public relation,” a government statement said.

The action has been taken under Section 3 of KP Advisers and Special Assistants to the Chief Minister (Appointment) Act, 1989. “Ajmal Wazir was removed after a leaked audio [clip],” Bangash confirmed. “Some things have come to light regarding [Wazir] taking commissions from an advertising firm.” Bangash said that Prime Minister Imran Khan had been informed of the matter and a forensic investigation will be held. He added that he will soon give the media a “detailed briefing” on the matter.

Earlier, a private TV channel had reported Wazir was resigning from his post due to personal reasons. “I am unable to dispense my duties as the information adviser, therefore I am resigning from my post,” Wazir had said, adding that he had already sent his resignation to Chief Minister Mahmood Khan. Asked about Wazir’s removal at a press conference in Islamabad, Information Minister Shibli Faraz said Prime Minister Imran ‘keeps an eye’ on every single member of his team and anyone found comprising the party policy ‘has no place in the PTI’. He said while there could be some unscrupulous elements within the PTI administration, ‘they will never get the government’s support and action will be taken against them’.

Wazir was appointed as the adviser to the chief minister for information earlier this year. Wazir, who belongs to Shakai valley in South Waziristan, had joined the Pakistan Tehreek-e-Insaf just before the July 2018 general elections. He was earlier a member of the Pakistan Muslim League-Quaid and had remained its central vice-president.

Meanwhile, a show-cause notice was issued to a ruling party lawmaker from Multan on Saturday for commenting against Foreign Minister Shah Mehmood Qureshi in public. The PTI standing committee on discipline and accountability said in the show-cause notice issued to Ahmed Hussain Deharr that the allegations levelled against Qureshi during a TV interview on July 8 were in complete violation of the party’s constitution. Stating that this attitude is not appropriate for a sitting MNA, Deharr has been directed to appear before a sub-committee on July 15 and explain his conduct with reference to the interview and its contents. Deharr was elected to the National Assembly from NA-154 (Multan-I) while Qureshi represents NA-156 (Multan-III). Talking to a private TV channel, he had said that those sitting next to Prime Minister Imran Khan wanted to replace him and take his place. Although the ruling party MNA did not name anyone but criticised Qureshi for being responsible for corruption in Multan, which, he added, had reached historic proportions.