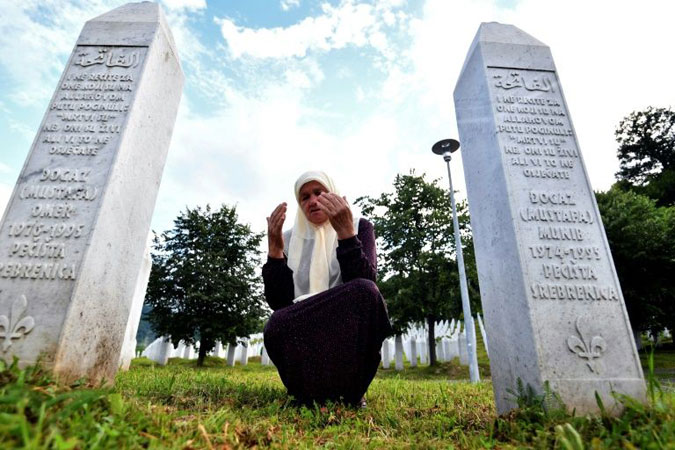 Relatives of the Bosnian Muslims killed in the worst atrocity on European soil since World War II are getting ready to mark 25 years since the Srebrenica massacre on Saturday, but for many Serbs the episode remains a myth.

“It’s not easy to live here next to those who 25 years on deny that a genocide was committed,” says Hamdija Fejzic, Srebrenica’s Muslim deputy mayor.

For Bosnian Muslims, recognising the scale of the atrocity is a necessity for lasting peace. But for most Serbs — leaders and laypeople in both Bosnia and Serbia — using the word genocide remains unacceptable.

Bosnian Serb forces killed more than 8,000 Muslim men and boys in a few days after capturing the ill-fated town on July 11, 1995.

The episode — labelled as genocide by two international courts — came at the end of a 1992-1995 war between Bosnia’s Croats, Muslims and Serbs that claimed some 100,000 lives.

Bosnian Serb wartime military chief general Ratko Mladic, still revered as a hero by many Serbs, was sentenced to life in prison by a UN court in 2017 over war crimes including the Srebrenica genocide. He is awaiting the decision on his appeal.

In the run-up to the anniversary, Serbian President Aleksandar Vucic described Srebrenica as “something that we should not and cannot be proud of”, but he has never publicly uttered the word “genocide”.

In July 2017, he said it was a “horrible crime” but added that “between 80 and 90 percent of Serbs do not think that a major crime was committed”.

Several thousand Serbs and Muslims live side by side in impoverished Srebrenica, a lifeless town in eastern Bosnia with just a few shops open in its centre.

Mayor Mladen Grujicic was elected in 2016 after a campaign based on genocide denial — he said the number of victims was not “valid”.

“I claim here that the genocide was not committed,” Bosnian Serb political leader Milorad Dodik told a rally of support to Grujicic at the time.

In 2019, during a conference gathering mainly Serb historians and aimed at “establishing the truth” about Srebrenica, Dodik said it was a “myth”.

“Every people need a myth,” said Dodik. “Muslims didn’t have it and they try to build a myth around Srebrenica.”

Ethnic Serb lawmakers in the Bosnian parliament have consistently rejected bills that would ban genocide denial.

So far, the remains of nearly 6,900 victims have been found and identified in more than 80 mass graves.

Most were buried at the memorial cemetery in Potocari, a village just outside Srebrenica.

On Saturday, the remains of nine victims identified over the past year will be laid to rest by their families.

Deputy mayor Fejzic said denial of the genocide was like the “last phase” of the atrocity itself, telling AFP: “We are facing that every day.”

For European Union enlargement commissioner Oliver Varhelyi the Srebrenica genocide was “still an open wound at the heart of Europe”.

“This part of European history must be upheld against any attempt at denial and revisionism,” he said this week.

Meanwhile, Mladic and Bosnian Serb wartime political leader Radovan Karadzic, who was also sentenced to life in prison in The Hague, remain heroes for many Serbs.

A university campus in Pale, Bosnian Serb wartime stronghold near Sarajevo, was named after Karadzic in 2016, and the plaque with his name at the entrance was unveiled by Dodik.

“Despite forensic evidence… and judgments by international courts, the denial of the Srebrenica genocide intensified,” he said.

Denial of genocide, he said, means a lack of accountability and will always lead to more atrocities.