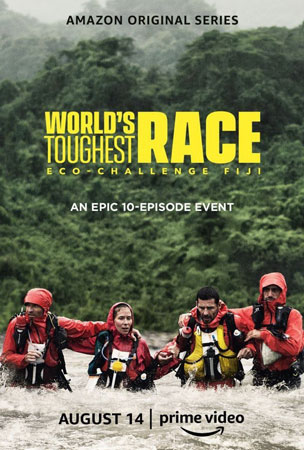 On August 14, Amazon Prime Video will release “World’s Toughest Race: Eco-Challenge Fiji,” the latest reality-TV adventure to be presented by Bear Grylls. A total of 330 participants will attempt to complete a course of more than 600 kilometers for the race, competing with each other and also against the clock.

Amazon Prime Video has announced that the ten episodes of “World’s Toughest Race: Eco-Challenge Fiji” will drop on its streaming platform on Friday, August 14. The new reality-TV adventure will be made available in more than 200 countries around the world.

A total of 330 competitors from 30 countries will race nonstop for 11 days, 24 hours a day, across hundreds of miles of harsh Fijian terrain complete with mountains, jungles and oceans. They will be divided into teams of five, each of which will be composed of four runners and an assistant. On the course, which covers 671 kilometers, the adventurers will have to battle with all kinds of obstacles as well as fatigue, fear and despair in their bid to reach the finish line.

Produced by MGM Television in partnership with Amazon Studios, the “World’s Toughest Race: Eco-Challenge Fiji” has been created by a team of executive producers specialized in the adventure genre. It notably included Bear Grylls himself, who worked alongside Lisa Hennessy (“Eco-Challenge,” “The Biggest Loser”), Mark Burnett (“Survivor”) and Eric Van Wagenen (“Survivor,” “The Amazing Race”).