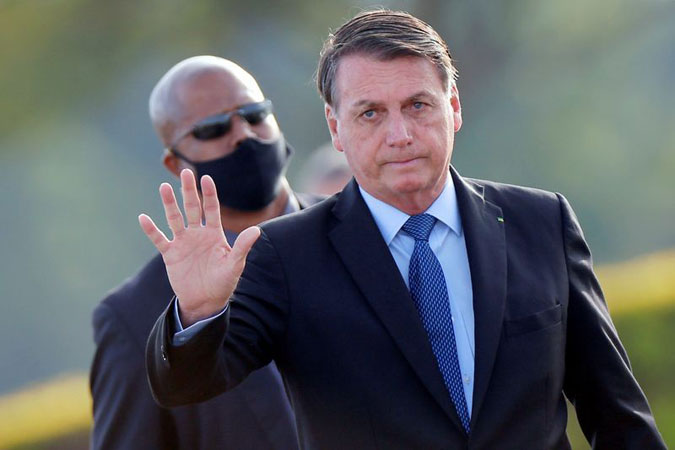 Brazilian President Jair Bolsonaro has gone all in on hydroxychloroquine to help his coronavirus-ravaged country beat COVID-19. He has pushed his government to make the malaria drug widely available and encouraged Brazilians to take it, both to prevent the disease and to treat it.

Now the far-right populist is putting his convictions to the ultimate test: Bolsonaro on Tuesday announced that he had tested positive for the disease and was taking hydroxychloroquine.

Bolsonaro said in a televised interview that he had taken an initial two doses, in conjunction with the antibiotic azithromycin, and felt better almost immediately. His only regret, he said, was not using it sooner.

“If I had taken hydroxychloroquine preventively, I would still be working” instead of heading into quarantine, Bolsonaro said.

Later, in a separate video, he gulped down a third pill. He said he was aware of other treatments, but noted none of them had been proven to work.

“I trust in hydroxychloroquine,” he said. “And you?”

Bolsonaro’s illness is a potent symbol of his government’s botched response to the outbreak. More than 1.7 million people in Brazil have tested positive for coronavirus and nearly 68,000 have died. Only the United States has performed worse.

A forceful critic of stay-at-home measures, Bolsonaro, 65, has largely shunned masks and derided the coronavirus as a “little flu.” Instead, he has placed his faith in hydroxychloroquine and chloroquine, turning them into the centrepiece of his government’s virus-beating playbook.

The two medications are often used against malaria, while hydroxychloroquine is also used to treat certain automimmune diseases. Some countries authorized the drugs to be tried on COVID-19 patients, and some doctors anecdotally have reported encouraging results.

Still, evidence is mounting that these drugs have no benefit for hospitalized patients. The US Food and Drug administration in June, for example, revoked its emergency use authorization for hydroxychloroquine and chloroquine, saying it was no longer likely that the medications were effective at treating COVID-19 in these patients.

Bolsonaro has been undeterred by such pronouncements. He has pushed his Health Ministry to expand access to the drugs and dispensed with two Health Ministers – Luiz Henrique Mandetta and Nelson Teich – who had urged a more cautious approach.

Eduardo Pazuello – an active-duty Army general, who took over on an interim basis on May 15, and remains in the job to this day – has proven more obedient. Under his watch, the ministry has broadened access to the drugs, and public sector doctors are now allowed to prescribe them for almost anyone who has tested positive for the coronavirus, not just the sickest patients. They can even be used by pregnant women and children with certain health conditions.

To understand how Bolsonaro’s administration embraced this unconventional strategy, Reuters interviewed more than two dozen people, including current and former health officials involved in the federal response, as well as physicians, scientists and public health experts. What emerged was a picture of a leader worried about the crippling effects of lockdowns imposed by governors and mayors across Brazil, and eager for a quick fix to re-open the economy.

Bolsonaro was initially inspired by his political idol, US President Donald Trump, who was an early advocate of hydroxychloroquine, a dozen sources said. But Bolsonaro has gone much further than his US counterpart.

At his command, the Army has drastically ramped up production of chloroquine.

His new-look Health Ministry, now led by soldiers and Bolsonaro loyalists, has eagerly promoted the antimalarials as the best hope against COVID-19.

And Brazilian public entities, such as state governments and federal ministries, have snapped up the drugs on the open market. So far this year, they have spent a total of 2.3 million reais ($429,706) on hydroxychloroquine – up 6,592% compared with the total amount spent in 2019, according to a Reuters review of government data. These bodies have also spent 1.51 million reais on chloroquine so far in 2020, compared with 626,472 reais in 2019.

At the centre of all this stands Bolsonaro.

Mandetta, the Health Minister fired by Bolsonaro in April, said the president’s drumbeat of support for the drugs had hampered efforts to impose stay-at-home measures and slow the spread of the virus in Brazil.

“That made many people believe that the cure was ready, that it already existed, that you didn’t need to worry, that you could just take this medicine, that would solve the problem,” Mandetta told Reuters.

Teich, Mandetta’s replacement who resigned after less than a month on the job, did not respond to requests for comment.

Since leaving, he has said publicly that he resigned due to disagreements with Bolsonaro, who was pressuring him to broaden access to hydroxychloroquine and chloroquine. Exclusive Reuters reporting reveals that Teich hoped to persuade Bolsonaro to wait for results from a fast-tracked hydroxychloroquine trial, but was unable to convince the president, according to four people familiar with the situation.

Marcia Castro, a native Brazilian and professor at the Harvard T.H. Chan School of Public Health, said it was a “totally absurd” strategy to prioritise unproven drugs over reliable tools such as testing, tracing and social distancing.

“It’s a profoundly lamentable situation, and it’s no coincidence that we now have more than 60,000 deaths,” she said.

Bolsonaro’s interest in hydroxychloroquine and chloroquine has its roots in early reports from China and France about the drugs’ potential to help COVID-19 victims, according to six people who spoke with Reuters.

In mid-February, Chinese state-run media reported that health experts there had “confirmed” chloroquine “has a certain curative effect.” Around that time, a French microbiologist, Didier Raoult, also began to laud the drugs.

Raoult’s advocacy of hydroxychloroquine and chloroquine was picked up by right-wing bloggers and libertarian thinkers. Then, on March 19, Trump waded into the debate. “I think it could be a game changer,” said Trump, who claims to have briefly taken hydroxychloroquine as a prophylactic.

Bolsonaro was particularly swayed by Trump’s comments, six people said. Bolsonaro had met with the US leader earlier that month at Trump’s Mar-a-Lago resort in Florida, and several members of the Brazilian entourage returned sick to Brazil.

“It’s the idea of a miraculous cure,” said one recently departed cabinet minister, speaking on condition of anonymity. “(Bolsonaro) believes in those magic solutions. And I also think, in part, it is to copy Trump.”

The White House pointed Reuters to a statement on May 31, when it announced it had sent 2 million doses of hydroxychloroquine to Brazil “as a demonstration of … solidarity” between two countries which share a “longstanding collaboration on health issues.”

On March 21, two days after Trump’s comments, Bolsonaro announced he was ordering the Army Chemical and Pharmaceutical Laboratory to ramp up chloroquine production in Brazil for use as a COVID-19 treatment.

By comparison, the lab produced a total of 265,000 tablets in the previous three years combined, according to production data obtained through a freedom of information request filed by opposition lawmaker Ivan Valente and viewed by Reuters.