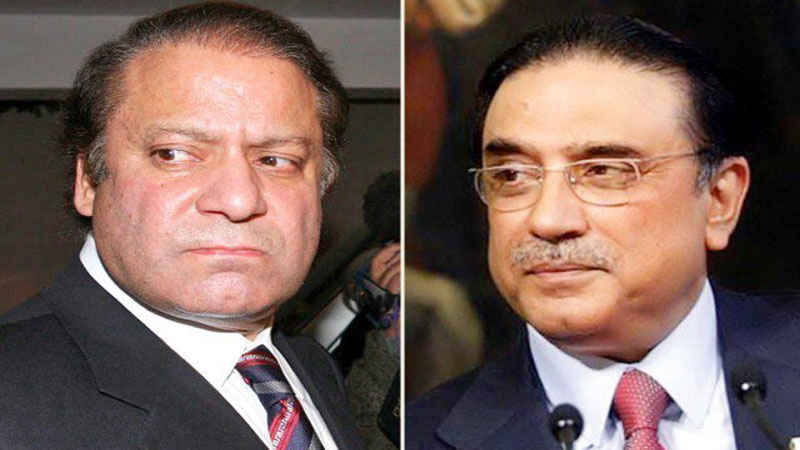 The Toshakhana reference accuses Nawaz and Zardari of bending the depository’s rules for their own benefit to retain luxury gifts, for which they were facilitated by co-accused former prime minister Yousuf Raza Gillani.

An advertisement for Nawaz’s summons has been put up on the court premises. The court has given the former prime minister one last chance and asked that he appear before the court on August 17 to answer for the reference filed against him.

Proceedings to declare Nawaz a proclaimed offender are underway. Judge Asghar Khan’s court started the process to declare Nawaz Sharif as an absconder due to his continuous absence. The court observed that Nawaz is ‘deliberately’ avoiding appearing in the court.

Meanwhile, arrest warrants for Zardari were also issued and sent over to NAB alongside bail bonds of Rs50,000. The court noted Zardari’s continuous absence in hearings. He is required to present before the court the Rs 50,000 surety bonds and one guarantor. If he fails to do so, he will be arrested and produced before the court. It may be noted that on June 30, the court had issued bailable arrest warrants for Zardari and started the process to declare PML-N supremo Nawaz Sharif an absconder in the Toshakhana reference. Gillani, who had been attending court hearings, sought exemption when he contracted the coronavirus. His son, Kasim Gilani, has blamed Prime Minister Imran Khan and NAB for his father contracting the illness due to court appearances.

Meanwhile, an accountability court on Tuesday postponed indictment of former president and co-chairman of Pakistan People’s Party (PPP) Asif Ali Zardari and his sister Faryal Talpur in money laundering case. Proceedings on plea bargain of one of the accused in the case could not be completed so court remarked that other accused cannot be indicted till the plea is processed. The court, while accepting National Accountability Bureau (NAB) investigating officer’s request of granting more time, adjourned the hearing till July 24. Earlier, the Accountability Court had on Monday postponed indictment of former president Asif Ali Zardari in Park Lane case and adjourned the hearing till July 14.

“Why didn’t Shehbaz Sharif show up if his Covid-19 test report came back negative,” questioned the bench. Sharif’s lawyer told the bench that as per health experts, a coronavirus patient is declared as having recovered from the disease after his two test reports come back negative. He added the PML-N leader is not completely fit. The court approved the PML-N leader’s plea for exemption from personal appearance.

During the previous hearing, the court had directed Shehbaz Sharif to get himself tested for the novel coronavirus from the Institute of Public Health.

The NAB lawyer had told the judges that the accused was to take a Covid-19 test on June 25 but he had not done so yet. He will keep asking the court for more time this way, he added.

Earlier, on June 3, the Lahore High Court (LHC) had restrained the National Accountability Bureau (NAB) from arresting Shehbaz Sharif in a money-laundering case.