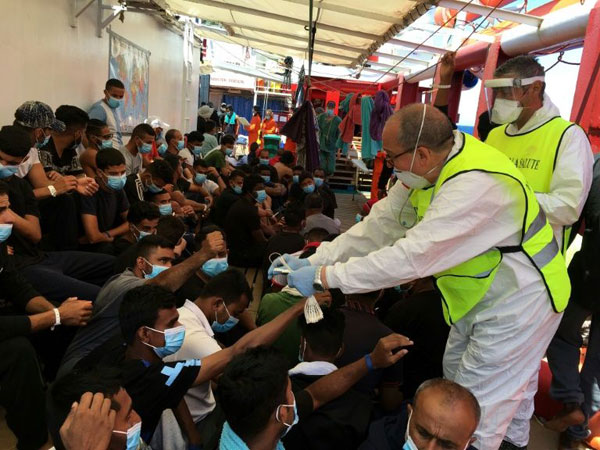 It is “shameful” that the European Union has still not found a solution for the care of asylum seekers five years after the migration crisis, German Interior Minister Horst Seehofer, whose country holds the EU Presidency, said Tuesday.

Seehofer was speaking at a video meeting of EU interior ministers as almost 200 migrants rescued by humanitarian aid boat Ocean Viking disembarked in Sicily after nine days stuck in the Mediterranean Sea.

“Each boat requires painstaking efforts to achieve a distribution (of migrants) among member states,” said Seehofer. “And each time, only a small number (of the member states) is ready to do so.

“In the long term, we cannot leave Italy, Malta, Greece or Spain alone to deal with this issue,” he added, lamenting that “very many member states refuse to get involved.

“This is a situation that is not worthy of the EU.”

Germany, France, Italy and Malta agreed last September on a temporary mechanism, based on a voluntary basis, for the distribution of migrants rescued at sea.

So far however, only a few countries such as Portugal, Luxembourg and Ireland have joined the initiative.

Seehofer is counting on persuasion to get more member states involved, but acknowledged that the task was “very, very difficult”.

And while he did not rule out the use of pressure tactics, he did not want to elaborate.

“I am not going to start the discussion during this EU Presidency with threats… I am counting on the strength of arguments, but I am not naive,” he said.

The commission is due to present in September a long-awaited and repeatedly postponed proposal for the reform of migration and asylum policy in the EU.

Seehofer said he hoped that a “political agreement can be reached on the most important points” of this pact by the end of the German Presidency in December.

The issue of the distribution of asylum seekers, which countries such as Poland, Hungary, the Czech Republic and Slovakia in refuse to accept, has so far been a stumbling block to reform. “It’s shameful that a community like ours can’t achieve it,” said Seehofer.