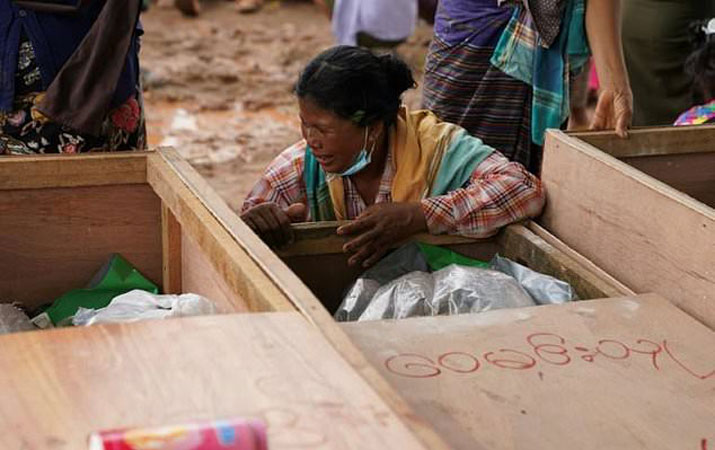 Five Yay Ma Hsay — or ‘unwashed’ as the jade miners of northern Myanmar are known — arrived early Thursday at the pit to scrape out a living on a scraggy hillside, lured by the prospect of finding a stone that could transform their lives.

But only three would return, the others victims of Myanmar’s worst-ever mine disaster after a landslide in heavy rains entombed at least 174 people, with scores more feared missing.

Sai Ko, 22, survived the spin-dryer of rock and heavy sludge by clinging to the corpse of a fellow miner, and battling to land.

His friend Zaw Lwin, 29, and his younger brother San Lwin were miraculously spat out from the churning torrent and delivered naked onto the shore, their clothes ripped off by the deluge.

But two of the crew didn’t make it.

Than Niang was cremated on Saturday, while Thet Shin is missing presumed dead, one of scores victims still unaccounted for from the accident at the Hwekha mine, in northern Kachin State.

“We have many dreams of helping our families,” a shaken Sai Ko told AFP.

The hillside which buried his friends harbours jadeite, a stone which goes for a fortune over the Kachin border in China in a multi-billion dollar industry dominated by firms linked to Myanmar’s military.

But for the poor migrants from across Myanmar who travel hundreds of miles to prospect in Hpakant, big paydays are few and far between.

“Sometimes we hunt for ten days and only find a piece worth $7-$14. If we find a big stone they (the mining company) will take it,” said Sai Ko.

Dabbing at the raw cuts on his face, his wife Pan Ei Phyu said they will abandon the mines and head home to near Mandalay.

“I don’t want him to dig stones in this life. I just want our family to be together,” she said.

Yet there are thousands more ready to take his place — illegal workers who buy their way into the vast open-cast mines after the company diggers leave — to scour for scraps of the precious stone left behind.

Zaw Lwin, from central Myanmar, is among them — despite the terror of Thursday’s accident.

He says his five-strong team arrived half an hour early to grab the best spot and avoid jostling with hundreds of others.

But the early risers became the first victims as the hillside collapsed.

“We hadn’t even started digging when we were hit by the wall of water.

“I didn’t know what was happening. My clothes were ripped off and rocks battered me… I suffocated on sand and mud.”

Just as exhaustion took hold — Zaw Lwin says he recited Buddhist mantras in his head accepting the end was near — he was suddenly washed onto land.

“I don’t know how I survived. I returned from death.”

He says he will not go back to the pit, a deep mean-looking gouge where mud-caked workers relentlessly chip at the rocks.

Instead, he will work the waste piles dumped on top of the hills by mining companies — a scree of stones which can yield fragments of jade to the Yay Ma Hsay, which translates as ‘unwashed’ in Burmese but is used to group the informal miners.

Just days after the trgedy, Saw Lwin still has dreams of beating poverty.

“One day, if I get quality stone I will be a Lawpan (a boss of the jade miners)… I want to live in a house in a compound. I’m not going to give up.”

The Hwekha mine is now a tomb for an untold number of people — mostly young migrants whose families may never hear of their fate.

Dozens of the unidentified were buried on Saturday in mass graves gouged into the red earth — an anonymous end far from home.

Social media has become a tool to try to identify the dead, with volunteers sharing photos on Facebook.

The mines are a cloaked in secrecy.

Campaigners Global Witness say front companies obscure the real military owners in a shadowy industry they estimate to be worth $31 billion a year.

But there is little trickle down.

Than Niang’s wife had to check 60 battered bodies before finding her husband, a grim catalogue of those at the end of the jade chain.