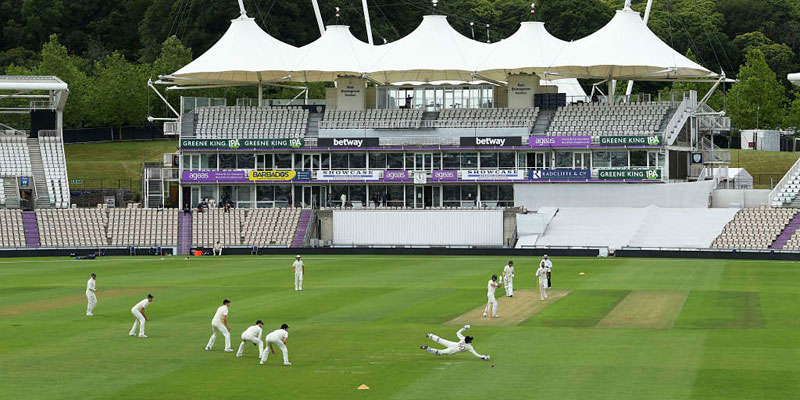 LONDON: International cricket will gingerly ease out of a 117-day shutdown in Southampton next week but the scars of the COVID-19 pandemic will be clearly evident at the Ageas Bowl. An encounter between the fourth and eighth ranked teams in test cricket is hardly a pinnacle but England’s series against West Indies could offer a glimpse into a future where the game plods on under the shadow of the new coronavirus. “Fans are tired of Zoom interviews, old matches and highlights. Finally, there’s something to look forward to and it’s very important that we get it right,” cricket historian Boria Majumdar said. “This is the beginning of cricket’s new normal.” The last time the sweet sound of bat meeting ball was heard in international cricket was when Australia beat New Zealand in a one-dayer in front of empty stands in Sydney on March 13.

While players have done their best to keep their skills sharp at home, the shutdown has wrought financial devastation on the game. Australia’s affluent board slashed jobs and state grants, and its chief executive Kevin Roberts was forced to resign following criticism of his handling of the crisis. For smaller boards, the impact has been even more acute.

West Indies have halved the salaries of players and coaching staff, Afghanistan slashed coaches’ pay and its contracted players could be the next, while Ireland’s board is one of several staring at depleted cash reserves. The Twenty20 World Cup, scheduled for October and November in Australia, looks unlikely to go ahead and the International Cricket Council (ICC) will announce the tournament’s fate this month. India’s wealthy board (BCCI) had to postpone the Indian Premier League due to the pandemic and is staring at a potential $534 million loss of revenue if it cannot find a new window for its Twenty20 cash cow. The BCCI hopes it can be slotted into the Twenty20 World Cup’s window if that is postponed but has been kept waiting with the ICC still to make a decision.

The inaugural World Test Championship has also become untenable following a series of postponements, including eight matches involving Bangladesh. “Unless the current ICC Test Championship cycle is extended there is no way we can play those eight test matches in the stipulated time frame,” Bangladesh Cricket Board official Akram Khan told Cricbuzz.

COVID-19 spanner: Sports business expert Thomas Abraham says he would not be surprised if the top teams play among themselves more to shore up finances. “They were being shortsighted even before COVID-19 threw a spanner in the collective works,” he told Reuters. “It’s all transactional and zero about the future of the game.” While Cricket has plotted a way to restart, the playing environment will not be the same, not least because of the absence of spectators. Players will have to clear multiple COVID-19 tests before being herded into bio-secure bubbles and remaining there until the series is over. Bowlers will not be able to apply saliva to the ball anymore, even if it compromises its swing, and substitutes will be allowed in test cricket for any player that contracts the virus.

Even the uniforms will be different after the ICC agreed to allow an additional logo on team shirts and sweaters to help the boards recoup some of their losses. Still, restless players and action-starved fans will be happy that there will be any cricket at all. Novak Djokovic’s ill-fated Adria Tour tennis event, which resulted in the world number one and a string of other players testing positive for the virus, was a stark warning to sports not to try and move too quickly, Majumdar said. “There’s a right way, and there’s a wrong way,” he said. “Novak Djokovic was the wrong way. We really need to get it right. “This is a massive acid test for the game.”