Ruckus in NA as PPP, PTI lawmakers level accusations against each other 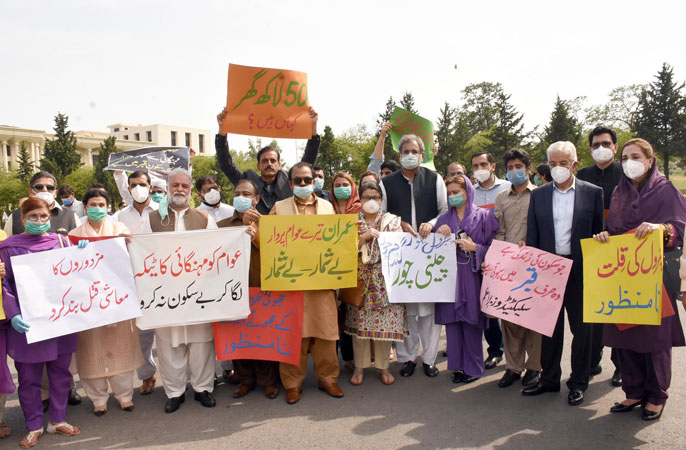 The National Assembly on Tuesday witnessed the opposition’s walkout after ruckus during session as Pakistan Peoples Party’s Naveed Qamar took off his coat to fight Federal Minister for Maritime Affairs Ali Haider Zaidi.

“The JIT report revealed that Faryal Talpur gave instructions to Uzair Baloch as well. It was also Faryal Talpur who got Nisar Morai appointed as chairman of the Fishermen Cooperative Society. Nisar Morai confessed to killing three persons. “PPP Chairman Bilawal Bhutto Zardari paid tax of only Rs 5.5 lac in 2016 despite owning assets worth billions of rupees.” PPP leaders created commotion during Ali Zaidi’s speech. The opposition later walked out of the NA when Speaker Asad Qaiser turned off the mic of PPP’s Abdul Qadir Patel.

Meanwhile, Federal Minister for Science and Technology Fawad Chaudhry said the first lot of ‘made in Pakistan’ ventilators will be handed over to the National Disaster Management Authority (NDMA) by Thursday or Friday.

Addressing the National Assembly, he stressed that we must focus on reforms by leaving differences aside. He said amendments in the National Finance Commission (NFC) Award and the National Accountability Bureau (NAB) laws are required.

Fawad Chaudhry had earlier announced that first batch of Pakistan-made ventilators has been prepared while three more designs of the lifesaving machine are in final phase. Pakistan has finally been included in the list of countries who can manufacture complicated medical machinery, he added.

The house has now started discussion on the supplementary demands for grants and appropriations pertaining to different ministries and departments for the outgoing fiscal year.

Responding to the points of opposition members, Minister for Power Omar Ayub said the government was pursuing the course of increasing the share of renewables in power generation to produce cheap electricity. He regretted that the previous government installed power projects run on expensive imported fuel for their vested interests. He said the PML (N) also left behind a massive circular debt.

On Petroleum prices, the Minister said the government also reduced the prices of petroleum products when these went down in the international market.

Minister for Industries and Production Hammad Azhar has said the present government is pursuing better fiscal discipline and management.

Responding to the points of opposition members in the National Assembly today regarding the supplementary budget, he said the supplementary budget in the last year of the PML (N) government was six hundred billion rupees. We reduced it to four hundred and fifty billion rupees in the first fiscal year. He categorically stated that there is no regular supplementary grant during the outgoing fiscal year except the expenditures incurred to deal with the situation arising out of Coronavirus and the petroleum.

The Minister also clarified that the petroleum development levy (PDL) and the GST on petroleum products have not been enhanced. The prices of petroleum products were raised due to an upward trend in the international market. He said it was the PML (N) government which had set the ceiling of PDL at thirty rupees.

The House today approved seventy-one supplementary demands for grants pertaining to different Ministries and Departments for the outgoing fiscal year.

These were presented by Minister for Industries and Production Hammad Azhar for adoption by the House.

According to details, opposition members protested against the government’s policies and budget on Islamabad’s Constitution Avenue. On this occasion, the members were holding anti-government placards in their hands.

Talking to media, Shahid Khaqan Abbasi said that the opposition has rejected the budget and it is protesting in the streets in solidarity with the public.

The former Prime Minister said that in his 32 years in politics, never before has he heard such nonsense on the floor of the House. He also accused the Speaker of not remaining neutral in the National Assembly.

The government has destroyed country’s economy. Price of everything is increasing day by day due to ineffective policies of Imran Khan, he added. “Where is the government taking the country?” He asked. The economy is all but destroyed, commissions and committees have been ineffective in bringing sugar prices below Rs 90 per kg and Petrol price increased by a record 34%.

The PML-N leader said that petrol prices hike can also increase the cost of electricity and groceries. Meanwhile, PPP’s Naveed Qamar said that opposition is protesting on the behalf of the nation. All Parties Conference (APC) is expected to be held very soon, he told. The PPP also asked the reason behind raising petroleum price by Rs25.