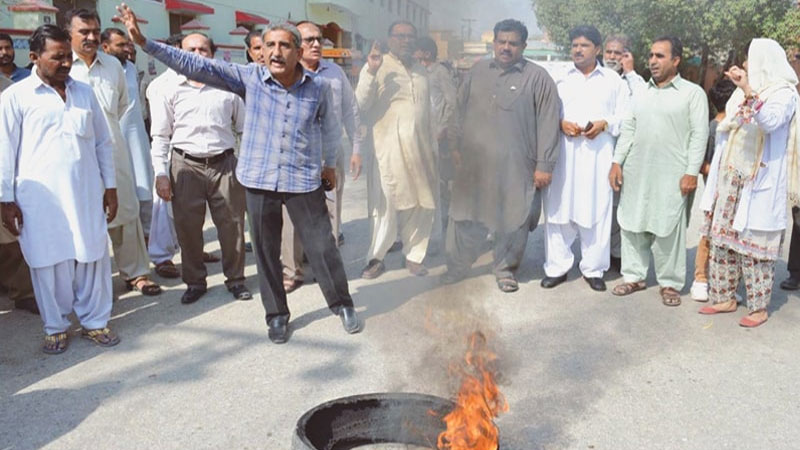 Doctors of Pakistan Medical Association (PMA) and paramedics working at the District Health Office (DHO) held a protest demonstration at the main entrance of COVID-19 ICU of the Chandka Medical College Hospital (CMCH) on Tuesday against Larkana police’s disrespectful attitude towards them after the recovery of stolen medicines and lodging of two FIRs. They were holding placards in their hands and also shouted slogans against police highhandedness. No samples were obtained today due to sealing of the DHO store by the police on Monday evening.

Dr. Gulzar Tunio, PMA’s leader told this Scribe that on Monday evening police conducted a raid at the office of DHO Larkana and took with them four doctors including Dr. Amanullah Abro, Dr. Farman Ali Abro, Dr. Shah Baleeguddin and Dr. Abdul Razak Rahujo along with about 15 paramedical and ministerial staff in the medicine theft case for further probe. He said all the four doctors were made to sit on the floor outside ASPs office as if they were thieves and they were treated like criminals which is not only against the spirits of law but ethics as well. He said we are not interfering in the issue of medicine theft investigation which should go on and culprits must also be taken to task at all costs whosoever they are. He said a high level inquiry should also be conducted in the theft issue along with that of treatment meted out by police with the doctors. He said we strongly condemn police attitudes because until recently they were saluting us for our meritorious services for the cause of saving precious lives of mankind during COVID-19 pandemic. He demanded an apology from the cops.

Dr. Amanullah Abro said that he had returned to the DHO office after getting samples of suspected COVID-19 patients and all samples were to be submitted at the DHO office when police conducted the raid. He said all samples were lying in the ambulance which may have become useless because police took us all in the same vehicle and we were not set free before four hours. He said the DHO store has been sealed and we will not be able to take any further samples till it is opened because kits are lying there. He said all the four doctors are posted to work at COVID-19 Isolation Ward and our job is to take samples of suspected people and we have nothing to do with medicines. He also demanded an apology from the ASP and SHO who misbehaved with them while they were on government duty.