Travels of a historian 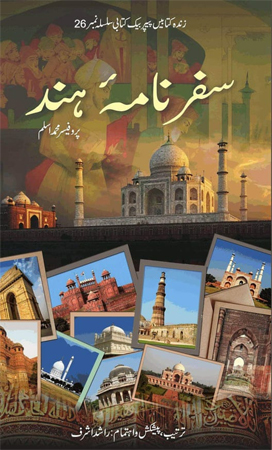 Prof Muhammad Aslam was born in Phillaur, Jalandhar in 1932 and acquired his initial education from Lahore.

After getting master’s degree in history from Lahore, he attended Durham University, Manchester University and later Cambridge University where he further honed his skill as he benefitted directly by the likes of A.J Arberry and other top notch orientalist scholars. After coming back to Pakistan, he started his teaching history at Punjab University, Lahore and served there till 1992 when he was heading the history department also. Besides teaching, he wrote a score of research papers on many literary and social journals of sub-continent, and also wrote sixteen books.

‘Deen-e-Ilahi Aur Us Ka Pas Manzar’, ‘Sarmaya-e-Umr’, ‘Tareekhi Maqalat’ Khuftagan-e-Karachi’, ‘Maulana Obaidullah Sindhi Kay Siasi Maktoobat’ ‘Safarnama-e-Hind’ are some of his books that he penned during his academic career spanning over decades. As few titles of his books suggest, he was interested in medieval history with a special reference to Islam and he probed these themes in his book and research papers. He wedded to the doctrine of ‘Wahdatul Shahood’ and seemed to be a strict follower of ‘Shariat’ in line with Sheikh Ahmad Sirhindi who staunchly opposed the pantheistic trends to rid Islam of the proselytizing influences induced by the pantheistic doctrine of popular saints. An inveterate traveller from his younger days, he made good use of his wanderings through the length and breadth of India by keeping a record of his various itineraries. From 1950s till the early eighties, he found lots of opportunities to visit India as he was married to the daughter of Maulana Saeed Ahmad Akbarabadi, who was an academic and scholar in his own right. When he got some of his travel pieces published in Urdu journals, he was surprised to find good following and this prodded him to collect all pieces into a book. This is how ‘Safarnama-e-Hind’ was published in nineties from Lahore. It was out of stock since then. Rashid Ashraf, an engineer who is a book lover turned publisher, chanced to flip through its pages and then and there he decided that the book needed a reprint. Rashid Ashraf has so far published nearly hundred books under the banner of ‘Zinda Kitabein’ at affordable prices for the book lovers. Dr Pervaiz Haider, who served as medical superintendent at government hospitals in Faisalabad and Sargodha, supports the efforts of Rashid Ashraf in publishing and keeping the prices low. So the book in hand is the outcome of the efforts of these two excellent guys.

The travels of Prof Aslam weren’t simply about sightseeing alone. When you are professional historian with an undying passion of documenting social, cultural and religious heritage of the Muslim history, you end up writing a book of great significance like ‘Safarnama-e-Hind’. The author traversed many areas in search of the historical footprints of the Muslims. So be it Delhi, Gujarat, Hyderabad Deccan, Bengal, Bihar, Rajasthan, Punjab, Jammu Kashmir or densely populated Uttar Pardesh, he led a peripatetic life whenever he was in India. He was particularly interested in religious places and saintly figures whose mausoleums he didn’t miss visiting.

With his deep knowledge about the saintly figures belonging to various orders, he already knew which location he needed to visit the moment he landed in any city. He surprised his friends in India when he found out the grave of famous poet and author of Padmavat Malik Muhammad Jayasi in Amethi as most people thought he was buried in his hometown Jayas, in Uttar Pardesh. He visited many libraries like Khuda Bakhsh Library and Raza Library in search of the rare historical manuscripts. He also scoured many private collections in this regard. His description of historical places and monuments is simply majestic as he goes back into history to enlighten the readers. He was fortunate to meet many famous figures in India such as Sheikh Abdullah and Mirwaiz Farooq feted him when he was touring Jammu Kashmir.

He attended the centenary anniversary of Darul Uloom Deoband in 1980 when the then Prime Minister Indira Gandhi was the chief guest there. A mammoth gathering startled the prime minister as people from many countries participated. He visited Gaya in Bihar where Buddha attained enlightenment. He was passing through Baghpat city, hometown of former indian prime minister Charan Singh, when he read a slogan written on the wall: ‘Jatwa katwa bhai bhai’. Charan Singh was Jatt and jatwa meant jatts. While ‘katwa’ referred to the Muslims. Prof Aslam was greatly beholden to epigraphy as he would note down inscriptions on graves, or mausoleums or plaques in any historical building. He has published some of these inscriptions in the book also for the benefit of historians who might find it useful for their research. At times the author becomes too harsh and loses his cool which a research scholar must avoid at all cost. He uses term ‘Saffak Qatil for Sikh warrior Banda Singh Bahadur as he did what many other Muslim rulers and marauders did before-merciless plunder and pillage. When you glorify your own warriors you can’t accuse other warriors only because they aren’t from your own faith. It is quite unbecoming of a true scholar. Despite these glitches, ‘Safarnama-e-Hind’ is a masterpiece as such travelogue cum historical document is hard to find in Urdu.