Hunger, could you kill over a 100 people daily? — among the most charitable nation”

Pakistan’s unswerving lead, with the highest number of cases per day, in the world meter of COVID19 with death toll escalation at an alarming speed has generated an abysmal situation of horror and helplessness. An atmosphere of chaos, and emotional stampede has started to appear on the horizon of government’s miscalculations, over confidence, mismanagement and the stubborn approach of not locking down the population as a strategy to contain and control the spread of virus. 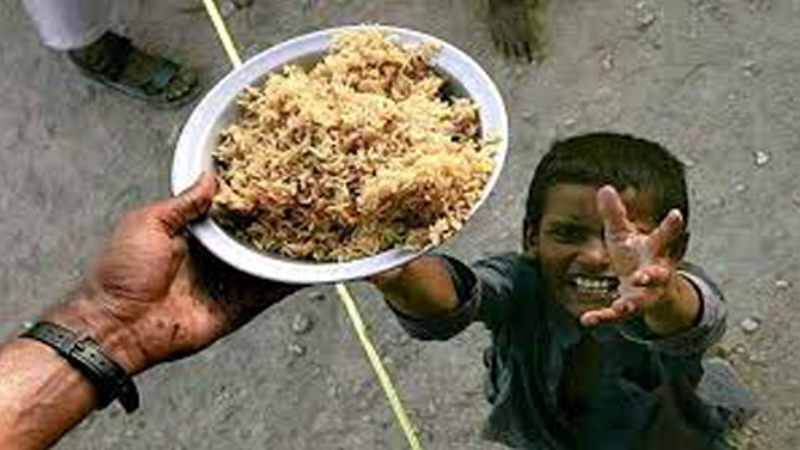 Smart lock down was perhaps a visionary approach but opening the flood gates of masses towards markets at the eve of Eid-ul Fitr, was the suicidal act of the government. It may not only deteriorate ruling party’s goodwill among public, health sector havoc and dilapidation, grip on the crisis management but will also generate a tall heap of dead bodies. And these unfortunate bodies will not only be an irreparable loss to the families but this darkest stigma will cast its permanent shadow on the credibility of government.

Strict measures to enforce SOPs from as little as wearing a mask to managing social distance from right at the commencement of ease in the lock down were not adopted. Whether call it stupidity and extreme JAHALAT of those shopping with small kids in crowded places without any protective measures or negligence or cruelty of those business managers who did not comply to the instructions. In any ways, an irreversible damage has been done and whole nation is bearing the brunt of it now.

One may ask, how did the wise minds envisioned to ensure SOPs in the congested and populous markets of Anar Kali, Ichra, Krishan Nagar, Township etc. with prominent features of extremely narrow streets and tiny sized shops? A large chunk of people is already in a state of denial and ignorance about the severity of the crisis. How could the virus be contained in the large religious congregations which half of the nation witnessed in extreme horror and others attended with senseless pride to be the great religious warriors.?

Small companies compel their staff to come to office, which are extremely small in size without much option of creating hygienic, safe distancing and sanitization conditions. Use of common spaces like toilets, lifts, kitchen and meeting areas become hub of virus accumulation. Even though work from home can be a feasible option but SAITH mindset does not let it happen.

Scenario has taken a disgusting and nauseatic course with mafias in action and black marketing of life saving drugs and blood plasma sale, the shortage of medicines and medical equipment for general public, heightened prices of almost everything, non-availability of beds in the private hospitals, hegemony of private hospitals in charging exorbitant amount of money, collapsing public health care system with shortage of space and essential equipment. This quagmire of disgrace and ruthlessness has stripped the humanity nude off its nobility.

Officials keep insisting availability of more than 30% of bed capacity and so on and so forth and also that every patient should not aspire to be accepted at PKLI.A filthy bed in a dingy far-off area with very little hope of humane treatment and welcoming attitude from already burdened, under equipped and un skilled health workers for a serious patient, who could only survive in a conducive health care environment , cannot be called a vacant medical care facility but a death bed awaiting its prey. The begging and pleas of people on various forums to help secure a bed for their dear ones are too heart tearing. What’s going on?

Could hunger be deadlier than the virus? Among our most giving nation, could over 100 people lose their lives daily because of empty stomachs? And could it be an uncontrollable and unmanageable situation? What would have it taken to rescue a starving soul?

And what does it take to revive a breaking breath and sinking pulse because of the havoc and catastrophe of virus in the human body? Is it easy to recover? As simple as providing a good meal? Thousands of individuals and organizations along with government have been mobilized to help the marginalized. They have succeeded to a large extent by the Grace of Allah and they could continue for as long as the calamity stays. But not much can be done to the miserable soul grasping for breath due to the rampant spread and prevalence of the virus in all the nooks and corners of the country. And what about that daily wager, who would bring the virus home? From where will it pay for the treatment?

Will the government leave the affected people on their luck to survive or die and will the disease be left to further spread faster than the Australian fire?

Now, can the government not

* put an effective lock down to slow down the local transmission and let the already affected lot recover to manage the burden on the health system?

* bind the manufacturers, distributors and retailers to make available and sell all relevant medicines and equipment on the standard rates?

Nation needs to be saved from further annihilation. Government cannot afford to have the blood of more helpless and mal handled people on their hands. It will become a halter neck to strangle their public, social, ethical, political and religious commitments and piety.

The writer is a a development sector practitioner