While the people and the government of Pakistan are confronting the diabolic coronavirus, which, so far, has taken away 2000 precious lives in a mere 100 days and the peek has yet to come, another herbivore locust plague is entering Pakistan to devour our Crops. If not tackled in time, the locust could damage more than 35-50 per cent of our agricultural production and could lead to the loss of livelihood of millions and result in a severe National Food Insecurity.

Substantial numbers of locust swarms have already attacked crops, fruit orchards and pasture lands in Baluchistan, Sindh and Punjab. The FAO has estimated that the losses to agriculture could reach PKR 205 Billion (equal to the US $1.3 billion); considering a damage level of 15 per cent to the productivity of wheat, gram and other staples. If the damage is 25 per cent to the crops, the potential loss of PKR 353 Billion for Rabi crops and could be up to PKR 500 billion if the locust also damages Kharif or summer crops. These damages, apart from creating food shortages, will also compound our overall economic losses due to lockdown, dwindling exports and a shrinking services sector; leading country to deeper economic crises.

Given the threat to livelihoods of millions and the food security of the country, the Prime Minister should convene a special meeting of the CCI

While the coronavirus was a bolt from the blue for Pakistan as well as for the rest of the world, the locust plague warning bells were rung by FAO. Pakistan and other neighbouring countries were warned that the locust swarms are breeding in Africa and other tropical regions due to one of the intriguing climate phenomenon called Ocean Dipole, in which the Western and Eastern Parts of the Ocean warm differently tend to have an outsized impact in bringing excessive rains in west Asia, which increases the moisture in the desert and provides a conducive environment for locusts to breed.

Historically, South Asia has been affected by locust plagues. Severe locust attacks have been recorded in 1926 and 1931/32. The first locust warning centred was established by British India in 1939 in Karachi. 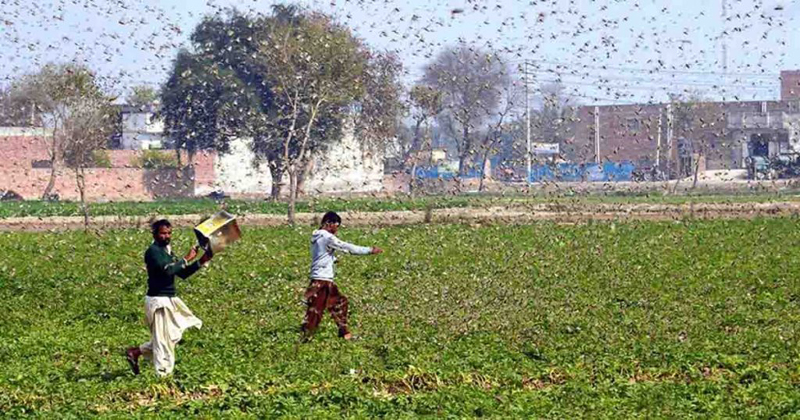 The response of the federal as well the provincial governments in responding to the locust plague has been disjointed and incoherent.

No comprehensive national strategy for control of locust was devised in the name of devolution of powers under the 18th amendment. As a result, one witnessed pathetic scenes of poor farmers moving away from the swarms to the next field by beating drums and empty tins, thus, indicating a total failure of the system to respond to this huge national, natural disaster. While at the leadership level, a blame game was a substitute for a comprehensive policy and its effective implementation. No coordination or dialogue between the Federal and Provincial Governments was visible.

Given the threat to livelihoods of millions and the food security of the country, the Prime Minister should convene a special meeting of CCI in which a long-term Locust Control National Policy, as well as a coordination mechanism, be devised with clear delineation of roles and responsibilities of the provincial and the federal governments.

The plant protection departments should be activated and given resources and equipment to fight this menace. A permanent Inter-Provincial Mechanism for Coordination on Locust Control should be constituted, which should coordinate an early warning system and implement a comprehensive national policy on locust control.

Since the locust plague is a cross-border natural disaster, there is also a need to evolve a regional collaboration mechanism in South Asia to exchange information for early warning and collaboration to fight such cross-border ecological and natural disasters. An urgent virtual meeting of agricultural ministers of Pakistan, India, Iran, Oman and, perhaps, Afghanistan should be convened. Pakistan may take initiative and we hope India would not refuse. Iran has been requesting help to fight the locust plague since it lacks wherewithal due to sanctions. The livelihood, as well as food security of millions of people in South Asia, is at stake and urgent action is required.