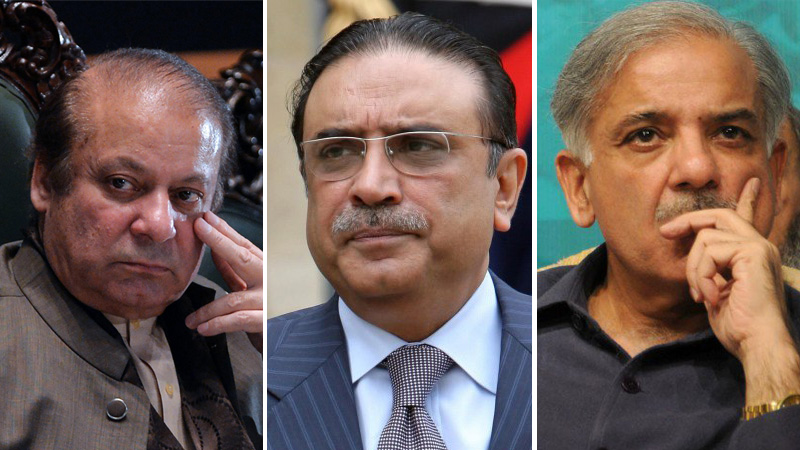 An accountability court in Islamabad Friday issued arrest warrants for former prime minister Nawaz Sharif in the Toshakhana reference filed by the National Accountability Bureau after no one appeared on his behalf to represent him in the hearing.

During the hearing, NAB asked judge Syed Asghar Ali to issue arrest warrants for Nawaz, Zardari and Abdul Ghani Majeed. “Nawaz Sharif and Asif Zardari had received their summons at their houses,” the NAB prosecutor told the court, adding that Anwar Majeed could not receive the summon as he is under treatment at a hospital.

However, the defendants’ lawyer interjected and stated that Yousuf Raza Gilani and Abdul Ghani Majeed were represented before the court. He added that if the accused are present then they ought to be allowed to leave after recording their appearance. “When chairman NAB has not issued the warrants then how can the NAB prosecutor ask for the same?” asked the defendants’ lawyer.

When Judge Ali remarked that Asif Zardari’s summons were received by his guards, NAB’s Deputy Prosecutor General Sardar Muzaffar Abbasi told the court that a servant of the accused received the warrants on behalf of him under the law. “Asif Ali Zardari is under treatment at a hospital,” said the former president’s lawyer while filing a plea seeking his client be excused from appearing in the hearing.

The judge also asked about the details of who had appeared on behalf of former prime minister Nawaz Sharif. However, the NAB prosecutor told the court that no one had appeared on his behalf.

The court after hearing the arguments issued arrest warrants for Nawaz Sharif and accepted the plea filed by Zardari’s lawyer. “I’m only excusing Asif Ali Zardari for this hearing,” remarked the judge while issuing the orders. He added that the former president has to appear before the court at all costs in the next hearing and summoned all the accused to appear before the court on June 11.

The summon has been issued in the name of PML-N president with regards to the ongoing assets beyond means and money laundering inquiries against him. Shehbaz Sharif’s last appearance in front of the accountability bureau was on April 22.

This is the fifth summon from NAB for Shehbaz Sharif whereas he has only made himself available for questioning once, evading the other four.

Shehbaz Sharif has been assured that all safety and security protocols with regards to coronavirus will strictly be implemented during his appearance.

Sources privy to the development claimed that the NAB investigations are reaching their crescendo and will almost be complete after Shehbaz Sharif answers their questions.