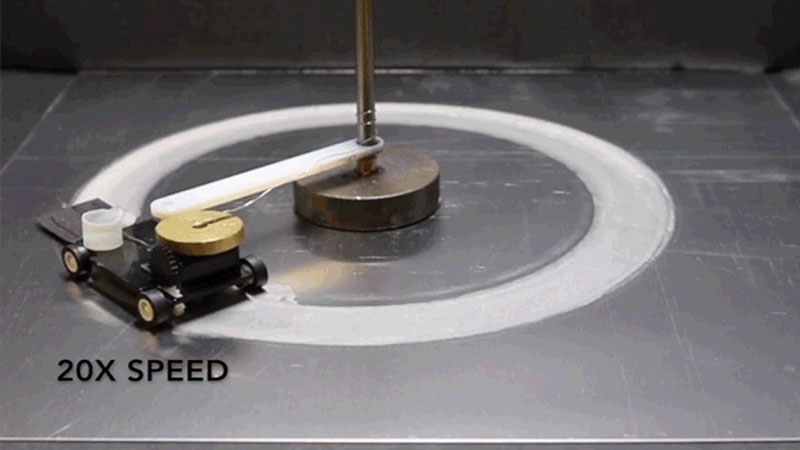 Batteries have served us well over decades, but as electronic devices shrink they’re becoming too heavy and inefficient for some uses. Now, researchers at the University of Pennsylvania have developed a new type of robot that powers itself by “eating” metal from its environment.

By storing energy, batteries can get relatively heavy, and only have a limited supply before they need recharging. Some devices overcome this by harvesting energy from their surroundings – think things like solar panels. But they only really function in specific conditions and have low power density, so they can’t take energy out of the environment very fast.

So researchers at Penn Engineering set out to develop a device with the best of both worlds. This device would run off the fast-acting chemistry of a battery, but do so by harvesting ingredients from its environment – specifically, metal and air. The team calls it a metal-air scavenger (MAS).

The MAS design would still have the basic layout of a battery, including a cathode, anode, and electrolyte. But the clever part is that the anode isn’t built into the device – any metallic surface that the MAS passes over will provide the function.

The cathode is made up of carbon, coated in polytetrafluoroethylene (PTFE) and with nanobeads of platinum embedded inside. The electrolyte is a hydrogel containing salty water. When this jelly-like patch is dragged around on top of a metallic surface, it oxidizes the metal below, breaking down chemical bonds to power itself. At the same time, the cathode material is reducing oxygen from the air above it.

“Our MAS has a power density that’s 10 times better than the best harvesters, to the point that we can compete against batteries,” says James Pikul, lead researcher on the study. “It’s using battery chemistry, but doesn’t have the associated weight, because it’s taking those chemicals from the environment.”

The researchers demonstrated the technology by hooking the MAS system up to a model electric vehicle, which dragged the hydrogel along an aluminum surface. The self-powered vehicle drove around in circles, carrying just a small amount of water to regularly re-wet the hydrogel.

“Energy density is the ratio of available energy to the weight that has to be carried,” says Pikul. “Even factoring in the weight of the extra water, the MAS had 13 times the energy density of a lithium-ion battery because the vehicle only has to carry the hydrogel and cathode, and not the metal or oxygen which provide the energy.”

The oxidation process does affect the surface that the device is driving on of course, leaving a thin layer of rust in its wake. But the team says that this only affects the top 100 microns of the surface, so it shouldn’t do any significant structural damage.

The team says that this system could be put to use powering small internet-of-things devices, such as sensors on shipping containers.

The research was published in the journal ACS Energy Letters.