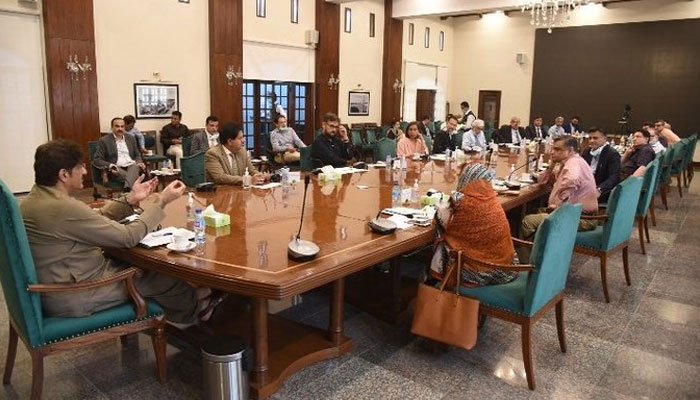 The Sindh government wants to extend the lockdown across the province by one week after April 14, said Chief Minister Murad Ali Shah on Thursday, as calls for the provincial government to resume economic activities increase.

The chief minister was speaking to senior journalists where he said that the Sindh government wanted all provinces in the country to take unified steps regarding the lockdown.

A lockdown has been imposed in the province since last month as the local transmission of the novel coronavirus has increased in Sindh. As of today, Sindh has reported 1,128 confirmed cases of the infection with 21 deaths.

The chief minister said that closures across the province will not be lifted at once but through a systematic process. “If factories are opened, minimum number of employees will work in them,” he said.

Murad said that shopping malls will remain closed. He said that the business community was exerting pressure on the government to resume economic activity while small traders have supported the lockdown measures.

Saying that allowing the construction sector to keep operating will can contribute to the spread of the coronavirus, Murad urged the federal government to extend the lockdown for an additional week.

Officials said the funds were released to 29 DCs, including the DCs of Korangi, East, West, South, Central and Malir in Karachi, while also in rest of the province, including Sukkur, Ghotki, Khairpur Mirs, Shaheed Benazirabad, Naushehro Feroze, Sanghar, Hyderabad, Matiari, Tando Muhammad Khan, Jamshoro and Thatta.

A letter was issued by the Sindh government to all 29 DCs in this regard. It said the funds being released under the “Head of Account Services General Administration & Coordination Department, District Administration and Unforeseen Expenditure for preparedness of disaster and relief”. It said the provincial government had accorded the permission for the drawl of the funds “on abstract bill for distribution of ration to poor/daily wage earners who are economically affected by the spread of corona virus”.