Coronavirus: People who lose their sense of taste and smell should self-isolate, scientists urge 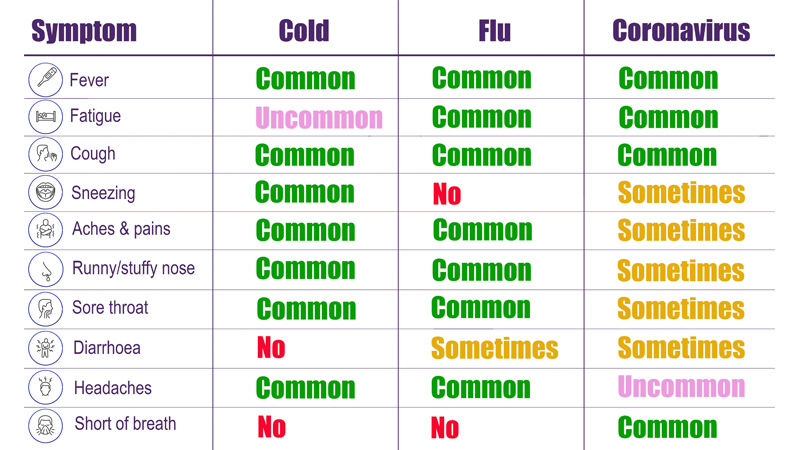 Losing your sense of taste and smell may be a key symptom of the coronavirus, research suggests.

Officials have long stressed that a fever or persistent dry cough are the two tell-tale signs of infection, but many suspected patients have also complained of muted senses.

To learn more, scientists from King’s College London analysed data collected by the COVID Symptom Tracker App. The coronavirus is thought to be mild in four out of five cases, but it can trigger a respiratory disease called COVID-19.

Of over 1 million app users, 1,702 reported having been tested for the coronavirus, with 579 coming back positive and the remaining 1,123 negative.

More than half (59%) of the positive patients complained of losing their sense of smell and taste, compared to less than one in five (18%) of those who tested negative for the virus.

The scientists are calling for those who are suddenly unable to smell or taste to self-isolate entirely in their home for seven days, like those who develop a fever or cough.

Other experts welcomed the “important study” but noted that a loss of the senses is common with other viruses that also infect the airways.

The coronavirus is thought to have emerged at a seafood and live animal market in the Chinese city of Wuhan at the end of last year.

It has since spread into 180 countries across every inhabited continent.

Since the outbreak was identified, more than 861,300 cases have been confirmed, of whom over 178,700 have “recovered”, according to Johns Hopkins University.

Cases have been plateauing in China since the end of February, with the US and Europe now the worst-hit areas.

Loss of smell and taste ‘strongest predictor of COVID-19’

The King’s scientists analysed the 1.5 million app users who logged on between 24 and 29 March.

Results suggest that among those who claimed to have tested positive for the infection, a loss to the senses was a greater indicator of the virus than fever.

The scientists then created a model that gauged which symptom is the most accurate predictor of infection.

After taking into account fever, coughing, fatigue, diarrhoea, abdominal pain and poor appetite, the strongest predictor was found to be loss of smell and taste.

“When combined with other symptoms, people with loss of smell and taste appear to be three times more likely to have contracted [the coronavirus] according to our data, and should therefore self-isolate for seven days to reduce the spread of the disease,” said lead author Professor Tim Spector.

Government officials are yet to echo this, with just those with a fever or cough being told to self-isolate to date.

When the model was applied to the over 400,000 app users who were reporting symptoms but had not been tested, results suggest almost 13% of them were likely to be infected.

The app asks users to log any symptoms, or lack of, every day to help scientists understand the spread and progression of the coronavirus.

“This urgent research is only possible thanks to the 1.8 million citizen scientists logging their symptoms every day,” said Professor Spector.

“This also gives us an evolving map of the UK of where symptoms are occurring two to three weeks before a strain on the NHS, which is why it’s vital to continue logging your health and symptoms, even when you feel completely healthy, and encourage others to use the app.”

The results have been published preliminarily online and not in a peer-reviewed journal.

A peer-reviewed study is scrutinised by a team of independent experts, who point out its strengths and limitations.

Other experts have largely welcomed the research, arguing it is “convincing enough” that people with a loss of smell or taste should self-isolate to be on the safe side.

“This paper shows good preliminary evidence that loss of smell and taste is likely to be a symptom of [the coronavirus], but its role as an early warning signal has not been confirmed,” said Dr Jane Parker from the University of Reading.

“Given the severity of the pandemic, the data are convincing enough that precautionary self-isolation on sudden loss of smell or taste should be considered.

“[However] there is no evidence those with loss of smell and taste are infectious.”

The coronavirus mainly spreads face-to-face via infected droplets that are expelled in a cough or sneeze.

Although unclear, an infected individual who is not coughing or sneezing would be expected to be less infectious.

It is unknown whether someone with just a loss of smell and taste would pass the virus on.

People who develop a fever or cough must self-isolate entirely for seven days, while other members of their household must do so for two weeks.

“It is important any public health message should come with the caveat that post viral smell loss may also be caused by viruses other than [the coronavirus],” said Dr Parker.

She pointed out 18% of those who tested negative for the virus in the study also developed a loss of smell and taste.

“These [individuals] were undoubtedly suffering from other viral infections, so the smell loss is a good indicator, but there are other viruses going around which also have a similar effect on smell,” said Dr Parker.

Once an individual has fought off the coronavirus, they are thought to have specific immune-fighting proteins in their bloodstream that prevent it taking hold again, at least in the intermediate term.

Although a loss of taste and smell has been reported anecdotally by patients, this is thought to be the first study to investigate the theory.

“This is an important study because it is the first to demonstrate scientifically and in a large population sample that loss of smell is a characteristic feature of [the coronavirus],” said Professor Trish Greenhalgh from the University of Oxford.

“Some people might criticise the scientists for using self-reports, but my own view is most respondents would give an accurate report.”

What is the coronavirus?

The coronavirus is one of seven strains of a virus class that are known to infect humans. Others include the common cold and severe acute respiratory syndrome (Sars), which killed 774 people during its 2002/3 outbreak.