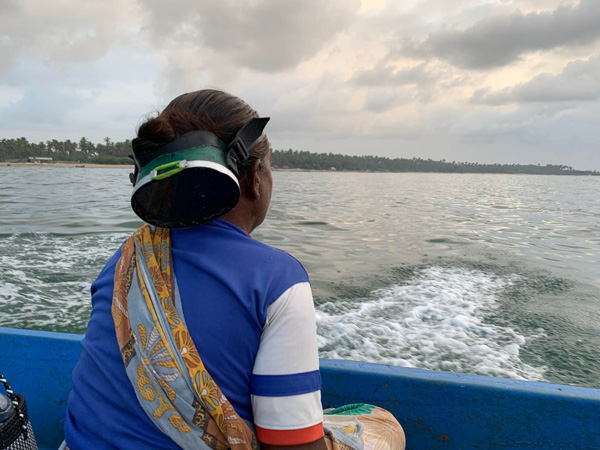 In a blue plastic barrel, Meenakshi Mookupori packed her belongings for a five-day stay on an island in the Indian Ocean, off the Coromandal coast of south India.

Besides her clothes, toothbrush and soap, she included her diving gear – a worn-out pair of black socks, a locally made pair of goggles, cheap plastic slippers, cloth gloves, a round metallic plate with straps – and pain killers.

Mookupori, 56, is one of nearly 2,000 women in Tamil Nadu state who dive to collect seaweed used in making agar, a gelatinous substance that becomes a thickener in food and medicines.

“I started accompanying my mother and grandmother to sea when I was eight or 10,” she said, as she helped load cans of drinking water onto the boat.

“Those days, the seaweed collection was huge. We would bring back bags full. Now the quantity has reduced. The number of days we harvest the seaweed has also reduced. The sea has changed and we also had to.”

Rising sea levels, hotter temperatures and stronger currents along this coast – considered one of the best for commercial seaweed cultivation – are some of the changes Mookupori is seeing.

Scientists say they are caused by climate change.

“With the rise in sea temperature and salinity, seaweed growth has declined in the last decade,” said K. Eswaran, a scientist who heads the field research unit of the Central Salt and Marine Chemicals Research Institute in Ramanathapuram district.

“Women who harvest seaweed have definitely been impacted, with their incomes coming down by at least 20%,” he said.

Mookupori grew up watching her mother leave home before dawn, board a boat and go to work harvesting in the Gulf of Mannar.

The shallow bay with a 365-kilometre (225-miles) coastline is known for its coral reefs and is home to endangered species such as dugongs, a marine mammal related to the manatee.

In 1986, the region was declared a national biodiversity park under India’s Wildlife Protection Act and collecting natural resource there was prohibited.

A Tamil Nadu government report noted at the time that the major environmental threat to the gulf region was quarrying of coral for production of calcium carbide and lime.

But creation of the marine park meant restrictions on accessing the bay’s 21 uninhabited islands to fish – or to collect seaweed – for 125 local villages.

“It was like they were declared thieves in their own backyard,” said Venugopal, the programme head for the non-profit International Collective in Support of Fishworkers (ICSF) Trust.

“The national park excluded them from that space, making it challenging for the women to earn a livelihood, instead of giving them rights to the sea and including them in the conservation programme.”

However, with few other options to earn a living, the gulf’s seaweed collectors have continued to illegally ply their trade.

Raniamma, 50, one of the harvesters who works with Mookupori, said she always keeps an eye out for anti-poaching officials when she and other seaweed harvesters sail to the islands for a harvest. Being caught there can carry a fine.

“But if we don’t camp on the island, we are unable to collect enough seaweed to sell,” she said, rolling up her sari and slipping into leggings and socks held up by rubber bands.

For each five kilograms of wet seaweed she collects, Raniamma earns 75 Indian rupees (about $1). Once the seaweed is dried and cleaned, it is sold by traders for 400 rupees ($5) per five kilos to domestic industry buyers.

“We only take what we need from the sea, which is seaweed,” Raniamma said.

“The anti-poaching officers don’t understand. We live off the sea and we are also its guardians. What we see down there is precious and we know it,” she said.

The women of Bharathinagar in Ramanathapuram district, who have waded into the waters of India’s southeast coast for decades, possess a wealth of knowledge about the gulf waters.

“We feel the changes. The waters are rougher and we have to spend longer hours underwater to fill our bags. We are also travelling farther from the coast then we did earlier,” she told the Thomson Reuters Foundation.

Ramanathapuram district wildlife warden A.S. Marimuthu has also seen the changes, and said he was looking for ways to collaborate with the women.

“They have never been a big problem for us but we hope they will play a bigger role in managing the marine reserve with us.”

Under a United Nations Development Programme initiative, for instance, eco-development committees have been set-up in fishing villages, with women educated on conservation and given training for alternative careers to reduce their dependence on the sea. For now, to deal with the changing conditions and protect their seaweed beds, the women have cut the numbers of days they harvest and discarded the metal scrapers they once used, now gathering the seaweed with their hands instead.

To counter charges of over-harvesting, they ply their trade only about 12 days a month and ensure they rotate between islands.

None of them harvest between April and June, the main breeding season for fish.

But their biggest push to protect the ecosystem and their livelihoods has been to begin cultivating – as well as harvesting – seaweed.

In additional to wild harvesting, the women now grow seaweed on bamboo rafts, as part of an effort promoted by the Tamil Nadu government. But set-up costs are significant and harvests unpredictable, the women say.

Still, “there are more than 600 women who have shifted to cultivating seaweed and that has helped the ecosystem tremendously,” said Eswaran.