The creation of Pakistan is a miracle of the 20th century. Stanley Wolpert wrote, “A creation of land mass of this size, with all odds stacked against its creation, was a true miracle of 20th century.” Pakistanis are resilient in the face of all odds.

Pakistan has been one of the countries hit by COVID-19, with the number of confirmed cases continually increasing. The government has ordered stringent restrictions on people’s movement; this would, at least, slow the spread of coronavirus for two weeks. Citizens are under fire for not abiding by the state or local government restrictions aimed at combatting the spread of COVID-19. But while restrictions have continued to tighten across the country, some people have not heeded experts’ calls to stay away from large crowds and limit interaction with others. Even some businesses have publicly stated their willingness to stay open despite government measures.

Despite restrictions on public gatherings and enforcement of section 144 in Punjab, hundreds of people, including Chief Minister Punjab Usman Buzdar and Governor Punjab Chaudhry Sarwar, attended the oath-taking ceremony of Justice Muhammad Qasim Khan, the newly appointed Chief Justice of the Lahore High Court. on Saturday.

We are now facing this crisis bereft of global leaders that can inspire, organise and finance a coordinated global response

On last Saturday, as many as 100 people in the Sukkur quarantine centre broke out of the designated wards after a WhatsApp message circulated and provoked the pilgrims from Taftan.

It was learnt that some volunteers wanted to serve food to the quarantined pilgrims, but they were disallowed by the administration. Consequently, the pilgrims were incited by Whatsapp voice notes that resulted in the breakout. 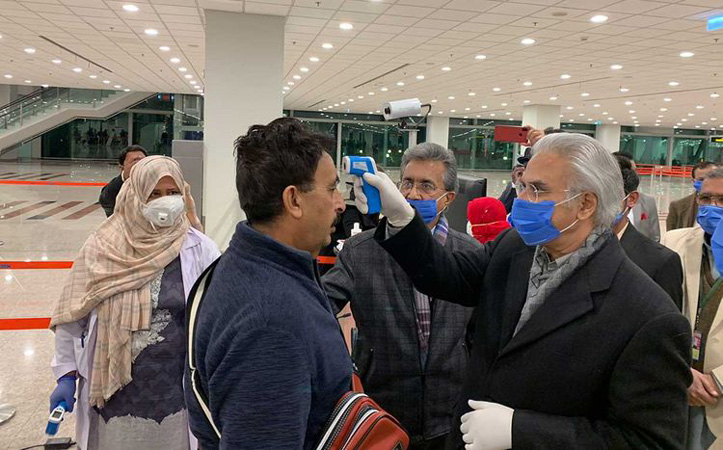 In times of a pandemic, citizens look up to their government for direction. But in Pakistan, the Imran Khan government has no plan and no direction to deal with coronavirus. Islamic countries like Saudi Arabia, Turkey and Iran have banned group prayers in mosques. Prominent Iraqi Shia cleric Ali al-Sistani urged people to abide by the ban on mass prayers to avoid the spread of coronavirus in the country. But in Pakistan, the Friday Jumma prayers will likely continue. Despite the warning that Pakistan could be following in Italy’s footsteps if public gatherings aren’t avoided, there is no real pressure from the government to ban these large congregations. Instead, CM Buzdar is meeting ulemas and assuring them that mosques won’t be closed. Shia clerics have vowed to continue their religious gatherings and shrine visits; according to them, congregations heal people, not infect them.

The Barelvi cleric Muhammad Ashraf Asif Jalali was confident about conducting an All Pakistan Sunni conference in Lahore on March 21: “No one can get sick except as per the will of God. If anyone gets infected with coronavirus due to our conference, then the Pakistan government should hang me.” Minister of Defence Pervez Khattak said that coronavirus was under control since government had banned all public and political gatherings. He said this while addressing the masses in a “banned” rally.

The crisis exposes a paradox that lies at the heart of Pakistan’s predicament: that of a weak state and a strong society. Perhaps the most important thing people should realise about a pandemic is that the spread of an epidemic in any country endangers the entire human species. In the fight against viruses, humanity needs to closely guard its borders. But not the borders between countries. Rather, it needs to guard the border between the human world and the virus-sphere.

What we must do right now is simply avoid gathering as much as possible, and limit meeting friends and family. Only leave home for essential activities. The virus so far has infected around 500 people because of people ignoring government’s advice. The limited adherence to the advice means we haven’t been able to slow down the epidemic. Those who do not comply should be subjected to civil fines.

It is now t time to absorb and recognise that we need to change our behaviours in a way that understands the urgency of this time and that this time will pass. Today humanity faces an acute crisis not only due to coronavirus, but also due to lack of trust between humans. To defeat an epidemic, people need to trust scientific experts, citizens need to trust public authorities, and countries need to trust each other. Over the last few years, irresponsible politicians have deliberately undermined trust in science, in public authorities, and in international cooperation. As a result, we are now facing this crisis bereft of global leaders that can inspire, organise and finance a coordinated global response.