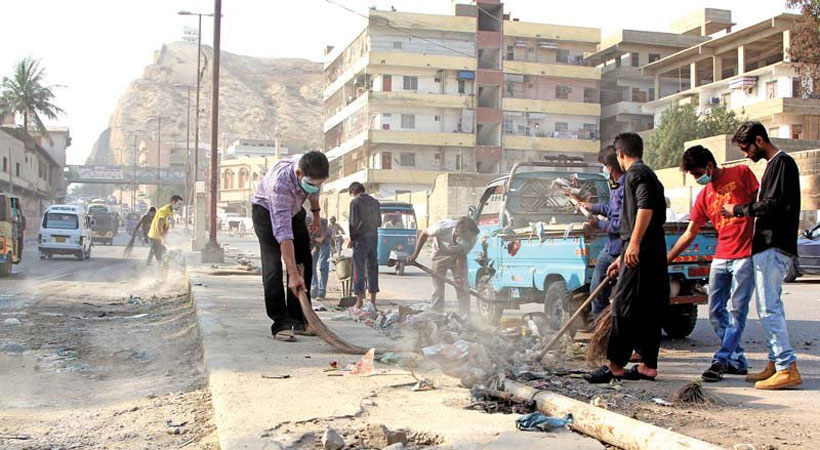 Provincial Minister for Information said that the Sindh government would take every possible step to prevent the spread of the Coronavirus and protect its people. He also expressed hope that our country would get rid of this epidemic soon. He said this while talking to the journalists after inspecting the spray campaign at Cantt Station and other areas on Friday.

“Sindh government is doing all it can to prevent then spread of coronavirus. Now we need the help of the public in implementing precautions that can assist in preventing the spread of the virus”, Syed Nasir Hussain Shah said this while speaking to people who met him while he was inspecting the spray campaigns. Provincial Minister for Information said that the effective way to keep ourselves safe from getting affected from the Coronavirus was precaution. “The more cautious people are, the more likely are to be safe”, he said. Syed Nasir Hussain Shah urged the people to take precautions to avoid from getting affected from the coronavirus. The Minister said that the Sindh government was working with medical experts to find the best possible solution to stop the spread of coronavirus. All the health advisories were being issued after detailed consultations, he added.

While speaking about the basic preventive measures Syed Nasir Hussain Shah said although the government was adopting all possible measure to protect the people from getting affected by coronavirus but at the same time people should also wash their hands with soaps and water as well as hand sanitizers. He said that people should also avoid touching eyes, nose and mouth with unwashed hands. On this occasion, the provincial minister practically washed his hands in a camp set up near Bilawal Chorangi. Syed Nasir Hussain Shah said that so far 25 centres had been set up by the Solid Waste Management Board in Karachi, where people could come and obtain hand sanitizers and soaps. Provincial Minister for Information and Local government said that in total 88 such centres would be opened from where people could not only obtain soaps and sanitizers, they could also come and wash their hands to avoid getting affected from coronavirus. In response to a question, he said that people should make a pledge to avoid social gathering for a few days and it would be better for them if they did not go to crowded places. “By taking these precautions, not only will they protect themselves from getting affected from coronavirus, but also they will protect their loved ones from the virus,” he said. Answering another question, Syed Nasir Hussain Shah said that it was up to the members of the Sindh Assembly of Pakistan Tehreek-e-Insaf whether (PTI) would like to submit their one month salary to the fund announced by the Chief Minister Sindh or not. It was for sure that the members of Sindh cabinet, including the chief minister, would submit their one month salary in the announced fund, he added. Provincial Minister for Information said that they had put criticism of the sake of criticism in quarantine for time being.