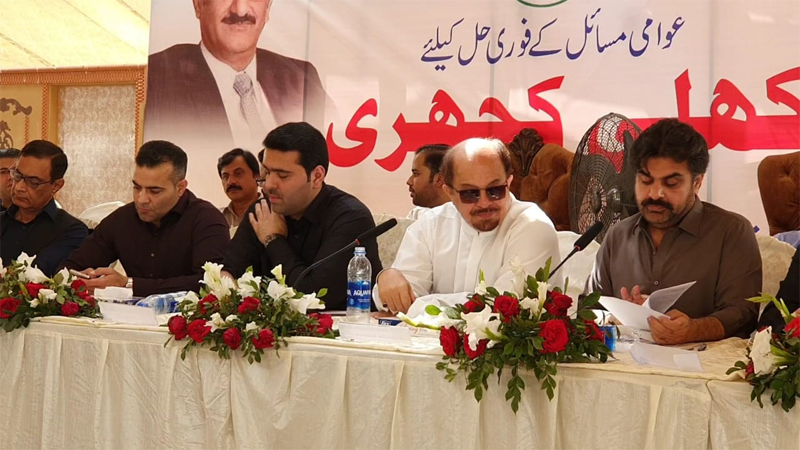 Sindh Minister for Information, Local Government, Housing, Town Planning, Religious Affairs, Forest and Wildlife, Syed Nasir Hussain Shah has said that the Sindh government is making every effort to redress the grievances of the people of the province and the idea of holding open courts has turned quite useful in this regard. He said this while speaking to an open court in district East of Karachi on Saturday. Sindh Minister for Revenue and Relief Makhdoom Mehboob Zaman, opposition leader in the Sindh Assembly Firdaus Shamim Naqvi, members of JUI and MQM-Pakistan also accompanied him on the occasion. Nasir Shah said that the sole purpose of holding these open courts was to gain first-hand knowledge of the problems being faced by the people and take action for their immediate solutions.

Nasir Shah said that every minister, adviser or special coordinator to CM Sindh was holding open courts in various districts and talukas of the province to listen and resolve the troubles being faced by the people. He said that on the directives of PPP Chairman Bilawal Bhutto Zardari last month the cabinet ministers listened and resolved various issues of the people swiftly.

The Provincial Minister said that people complained against the pathetic behavior of the concerned official and officers of various departments. These complaints had not only been noted but also they were being addressed swiftly. He said that all the data of these open courts was being sent and monitored by the Chairman office. Syed Nasir Hussain Shah assured the people that all their genuine problems would be addressed on priority basis. The Minister also welcomed the leader of the opposition in the Sindh Assembly Firdaus Shamim Naqvi, members of JUI and MQM-Pakistan. He said that it was a positive sign that we all are together here to address the problems of our people.

Syed Nasir Hussain Shah said that the ministers of PPP address the problems of the people even in those areas from where were not voted for. He told the people that the Sindh government in collaboration with the World Bank had planned to initiate projects worth billions of rupees of water and sewerage for all parts of the province. Similarly, he informed that Sindh Chief Minister Syed Murad Ali Shah had also issued directives for the expansion and development of road infrastructure.

The provincial minister also informed that so far Sindh Building Control Authority had demolished 900 illegal constructions. He said that all those officers of Sindh Building Control Authority who were involved in permitting illegal constructions would be taken to task. The Minister said that the Sindh government would not surrender against any of the mafia. He said that the Sindh government would also welcome and cooperate with the federal government in any of its endeavor towards the betterment of the people of Sindh.

Syed Nasir Hussain Shah also said that the problems being faced by the people due to the lack of place reserved for graveyards would also be addressed. The Minister also told the people to not to panic owing to the possible spread of the coronovirus as so far according to him everything was in control and the Sindh government was adopting every possible measure for the prevention of its spread. He also welcomed the approval of the replacement of Inspector General of Police, Sindh by the federal government. Syed Nasir Hussain Shah said that the Sindh government would never let the officials of the Sindh Police force down in any way.

He said that so far 21 officials of the Revenue Department were facing disciplinary action for misusing their authority. Makhdoom Mehboob Zamam said that in accordance with the vision of Chairman PPP Bilawal Bhutto Zardari and the directives of Sindh Chief Minister Syed Murad Ali Shah these open courts were being proved quite constructive for the people.