Is India ready to battle covid-19?

The fear of COVID-19 has turned into a bitter reality for the people of India. India which shares the border with the epicenter of coronavirus, China, has now also joined the list of infected countries of COVID-19. India being the second most populated country of the world raises concerns upon its strategy and policies over the mere health crises.

So what measures India has taken or taking to take control over the spread of COVID-19 in the second largest populated of the world? If we see comprehensively, we can see few changes and precautions which the Government of India is taking to limit the risk of COVID-19 growth.

India has suspended “all existing visas, except diplomatic, official, UN/international organizations, employment, project visas” until April 15. The travelers might not be able to enter India like before for the tourism purpose. Moreover, the government has strongly advised against travelling to countries such as China, Italy,

Iran, Republic of Korea, Japan, France, Spain and Germany. Limiting the contact with the effective countries lessens the chances of growth of virus in many ways but the fear remains same as people had already been to India after being to these countries past months. Now India has suspended e-visas issued to nationals of France, Germany and Spain overnight. Even regular visas issued to foreign nationals who have travelled to coronavirus affected countries have been suspended.

Now let’s talk about what is happening in India at the moment. In Kerala, at least 1,116

people are under observation – 149 in isolation wards of various hospitals and 967 under home quarantine. In Karnataka, a software engineer who returned from the US on March 1 tested positive on Monday, becoming the first COVID-19 patient in the state. According to health department officials, his wife and daughter too tested positive for the virus on Tuesday. Mizoram, Manipur has shut its border with Myanmar indefinitely amid the novel coronavirus scare. Mizoram also on Monday has sealed its borders with Myanmar and Bangladesh, and banned the entry of foreigners to prevent the spread of the corona virus. India has also restricted export of about 26 Active Pharmaceutical Ingredients and formulations including antibiotics, vitamins and hormones like Paracetamol, Tinidazole, Metronidaxole, Vitamins B1, B6, B12, hormone progesterone, with immediate effect.

Many celebrities refrained from celebrations due to the health concerns

On March 10, 58 Indians were brought back home from coronavirus-hit Iran in a military transport aircraft of the Indian Air Force. According to some officials it was a quick decision which was taken to evacuate their nationals from the effected country is such a short period of time. The arrival of these nationals, back home clearly will have a long term effect on the other citizens. As per Union Health Ministry, there are now a total of 126 confirmed corona virus cases in India which includes Indians and foreign nationals both. Some have been cured, while 3 people are reported as dead. In an advisory, issued on March 10, the government has advised all the citizens to avoid non-essential travel abroad in view of the fact that the corona virus has spread to over 117 countries now and still growing speedily. Passengers from 12 countries are being screened, including those from Kathmandu, Indonesia, Vietnam and Malaysia. India has imposed “some restrictions” on export of certain medical equipment to China in view of their shortage of supply in the country, and the precautions taken are in accordance with World Health Organization’s advisory for the corona virus outbreak.

The coronavirus threat also casted a shadow on Holi celebrations, which were subdued across the country. The widely celebrated festival of colors in India was witnessed cold and featureless. Many celebrities of the countries refrained from the celebration due to the health concerns and as well as advising their fellow Indians to stay safe during the risky period of coronavirus spread. The crowds of festival were replaced by the minimal celebrations of intimidate family gathering at homes. Telangana, a state holding a population of 35.19 million people has allocated INR 100 cror for preventing and containing a possible outbreak. Private hospitals have been given a directive not to delay reporting cases. Three designated hospitals for isolating patients have been set up. On the other hand in Kerala, schools and colleges and cinemas will remain closed in the state till March 31. Classes ranging from one to seven of all schools – state, CBSE and ICSE boards – will remain shut and examinations which have begun for them will be put on hold. Examinations for class 10, class 12 and vocational higher secondary will, however, continue. Final examinations of class eight and nine also will proceed as usual. Temple and church festivals, which witnesses mass gatherings should be avoided, but rituals can be can be held in a low key manner. 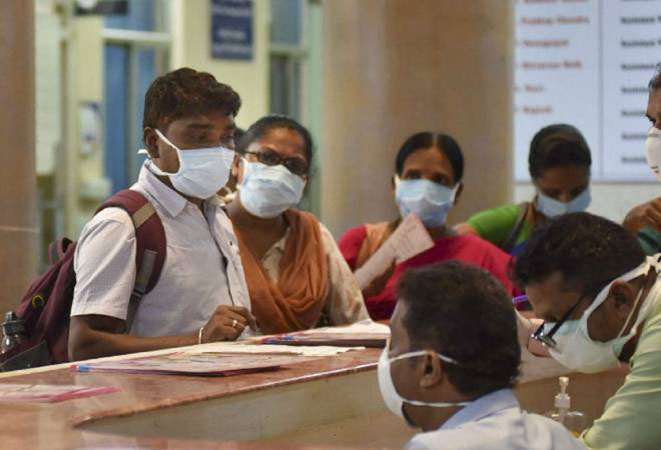 The current COVID-19 cases in Maharashtra are 39, it is highest in India as compare to any other state. Local train of Mumbai which is the lifeline of public serves as hot bed for COVID-19 spread. Even if COVID-19 patient travels from the shortest route possible, they would infect tens of thousands of people in just one go. While these concerns haunt the people of Maharashtra, government stays silent.

Although the current cases are recorded 126 in total but the officials says that they maybe are higher than the current figure. Some epidemiologist of India says that to calculate the actual cases one must multiply the current reported cases with 10, which makes the cases increase from 125 to 1250, with this pace the total reported COVID-19 cases in India might further hit more than 200 cases in next 5 to 6 days.

Despite of all the precautions the government of India is taking the nationals are not at all satisfied by the steps taking into consideration, the airports do not have proper scanners or facilities to detect the COVID-19 positive travelers, medical staff is short in number and the hospitals lack advance machinery. India is now at the beginning stage of the coronavirus, yet the government is failing to take any quick and functional steps, three people have already died so far in such short span of time. The cities entrances are still open for public as well as public transportation. A draft of the COVID-19 positive patients shows that they belong to different cities making the risk higher of not being at one place, instead being in far away states. Jammu Kashmir, Punjab, Utar Pradesh, Rajistan, Maharashtra, Telangana, karnatika, keeral, Tamil nadu and the capital of India Delhi holds COVID-19 positive patients. It’s a high time for the government to take serious initiatives by either closing the borders of all cities and states or putting public in their homes completely. India should take the example from China and its strategy to take over the control of COVID-19.