Earlier civilizations such as Babylonian, Egyptian, European, Arab and Indian depict a heart-wrenching status of women. They were treated worse than slaves, buried or burnt alive and considered as a cause of the evil. No one talked about their rights even when slavery was abolished. Magna Carta followed by French and Russian revolutions made women an active player in male-dominated societies. Now in the 21st century, their role is acknowledged in building nations. They are found in the political and administrative arena in the form of Angela Merkel as German Chancellor, Hasina Wajid as Bangladeshi premier, Colinda Graber as Croatian President and Kristalina Georgieva as the IMF’s managing director. Their participation has been rising in almost every sector whether its health, sports, media, politics, army, navy, air force, traditional business or agricultural activities. Their literacy has been increasing rapidly in some places; the gender gap in education has been shrinking worldwide and their number in elected office is increasing – a good omen for the development of any country. 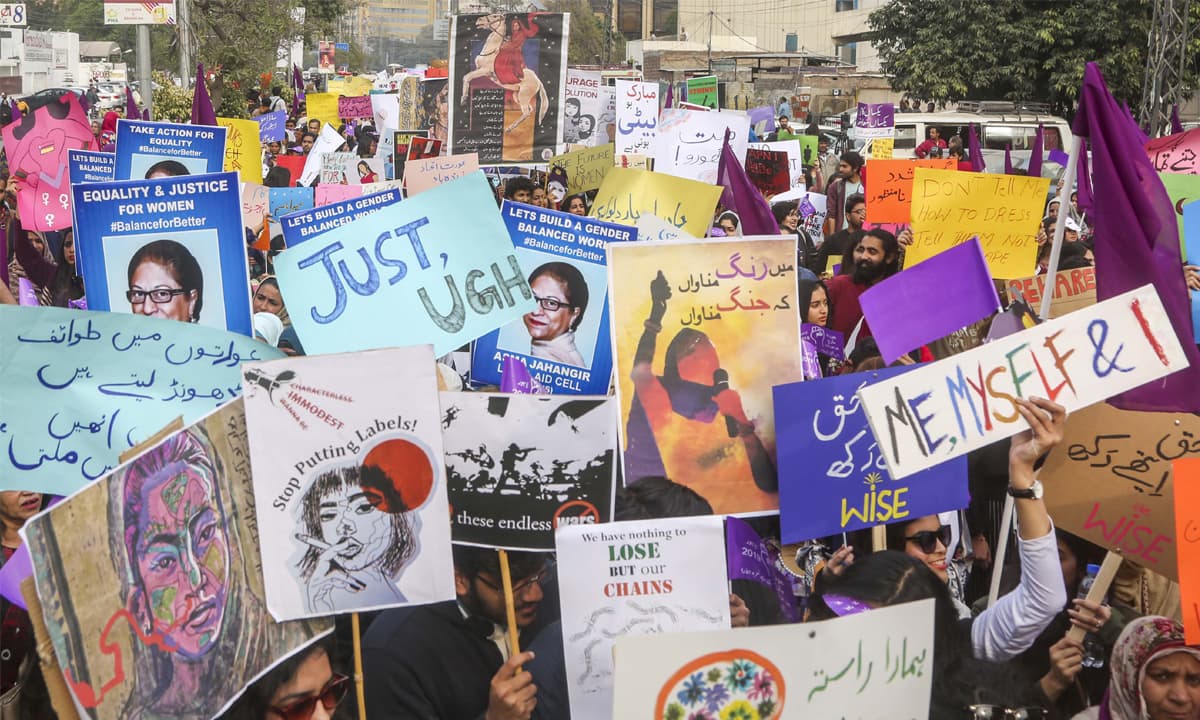 However, despite these notable advances, gender disparities still persist in some regions because it’s a gradual process to get plausible results as overnight change is not possible. In Pakistan, women have enjoyed respectful positions in the form of Fatimah Jinnah, Benazir Bhutto, Bano Qudsia, Parveen Shakir, Sharmeen Obaid, Major General Shahida Malik, etc. No doubt, Sindh and Baluchistan manifest the abysmal status of women in many sectors but women in urban areas are enjoying better status comparatively. When one talks about human rights, it doesn’t only reflect the rights of single-gender (women) instead it covers both. Humiliating one and promoting others is not a judicious approach at all.

Khalil Ur Rehman Qamar has been a well-respected figure in the media industry and is a writer of iconic drama serials and movies such as Landa Bazaar, Punjab nahi jaungee, kaaf kangana, Laal Ishq, pyare Afzal and sadqay tumhare. The most recent, the top-rated mere pas tum ho broke all the previous records and made him interact with his fans which he used to avoid previously. Despite this fame and prestige, his views against women generally and heated and abusive exchange of words with Marvi specifically brought him in the limelight of huge criticism; not perceived well by masses of the media industry. The debate on pro-Khalil and pro-Marvi is everywhere without focusing on the main issue. Even most of the anchors of media houses are in full swing to exaggerate this trivial issue and justifying this below the belt slogan. Having said that, there are some intellectuals who not only condemned the abusive language of Khalil but strongly disapproved of the slogan as well.

Similarly, respect for both genders should be there whether it’s male or female. Every person has a right to have a view or opinion. He might have some strange and different experiences that shape his perception. A difference of opinion is obvious in debate but imposing something on others, call their names followed by ignominious remarks have become the norm in our damaged society should be discouraged at all levels. One must analyze the whole scenario cautiously before jumping on a hateful bandwagon just because someone says something you disagree with.

At the other end of the spectrum, Marvi Sarmad is aggressive, impolite, ill-mannered and provoking. Media channels mostly invite her just for rating. Her conduct with others is questionable. Because she is a woman so it’s ignorable, unlike men. This case is different without an iota of doubt.

When it comes to that particular slogan, those who are in favor interpret it as protection against rape, harassment, child marriage, and physical abuse, violence, trafficking, and slavery.  According to them, those with divergent views are perpetuating a culture that produces all these inhumanities. It’s not the case actually. Can a woman raise this slogan in front of her father or brother for her rights? Not really because it’s disgraceful, shameful, insane, abusive and sexual; it doesn’t depict our culture values, it hurts religious and sexual sentiments. One should read Banu Qudsia’s ‘ Mard hawas ka pujari’ before violating the dignity of men. However, they can come up with different slogans like “mere zindagee mere merzi” or ‘mere zindage mere faisale’. These two sounds are pretty decent to convey the exact message.

Taking all into consideration, it’s our foremost duty to investigate the whole scenario before diving into a hateful bandwagon just because it doesn’t go with your views.

The writer works as a Health Safety & Environment Officer in Shaukat Khanum Memorial Cancer Hospital and Research Centre (SKMCH & RC), holds a degree in MPhil Environmental Science from Government College University, Lahore. He can be reached at  haider-92live.com