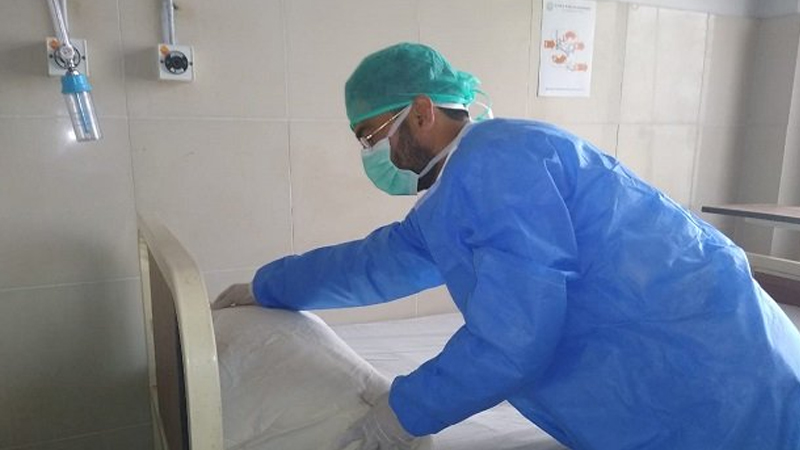 Deputy Commissioner (DC), Larkana, Muhammad Nauman Siddique, presided over a meeting of health officials, directing them to take all necessary required precautionary measures and establish isolation wards in their respective healthcare facilities after the detection of deadly coronavirus to face any eventual situation. The meeting was attended by assistant commissioners, health, education and other relevant government department officials Friday at Darbar Hall. DC told the participants that after detection of three Coronavirus positive cases in Karachi this meeting is being held to face any such situation. He directed the incharge Medical Superintendent (MS), who is posted here as stopgap arrangement being in BPS-19 due to his political influence, Chandka Medical College Hospital (CMCH), to establish isolation ward in the CMCH where all required medicines for treatment of this viral disease must be ensured. DC directed incharge District Health Officer (DHO). Larkana, who too is looking after the charge due to his political influence being junior as well, to established isolation wards in all Taluka Headquarter Hospitals (THQs). He further directed them to ensure proper cleanliness in and outside hospitals and establishment of Control Room. DC Nauman further asked the participating officers to conduct tests of those people who have recently returned either from Iran or China and submit him their report by the evening. DC further directed the health-care providers to appoint Focal Persons on Taluka level to monitor the prevailing situation. Meanwhile, MS, CMCH, established 6-bed capacity isolation ward at Casualty where rusted and outdated beds were kept and mattresses, also very old and torn, kept over them had blood stains which were termed highly tyrannical by the residents. Such photographs were displayed on social media which also were largely criticized by the readers bringing very bad name to the health department bosses. The residents have demanded of the rulers to replace the political appointee MS immediately who has so far entirely failed to deliver during his present posting. Meanwhile, on the directives of Sindh government, the Sukkur health department established coronavirus isolation ward at Ghulam Muhammad Mahar Medical College hospital on Friday. District Health Officer (DHO), Dr Muneer Ahemd Mangrio, told the Daily Times Friday, that the hospital was prepared for the situation adding that we don’t have a single patient so far, but all preparations have been done in advance. He said that a isolation ward and separate facilities for patients with minor symptoms have been established in district headquarter hospital.