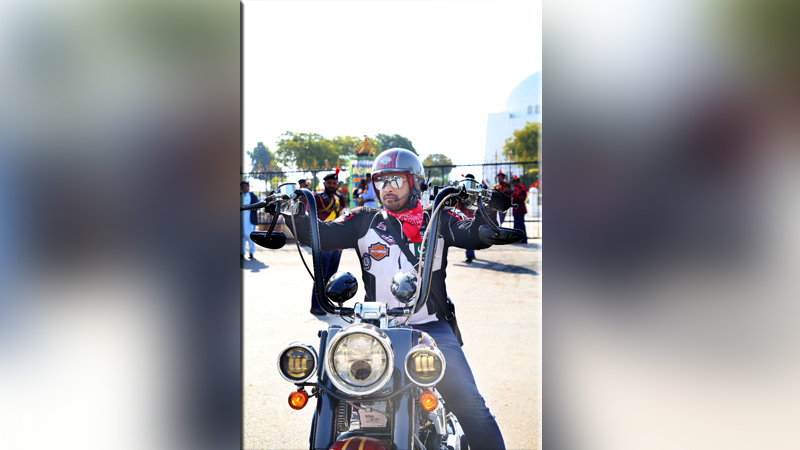 Some do it to stay lean, others just enjoy a breath of fresh air. Whatever the reason is, celebrities belonging to different fields of the entertainment industry love to park their cars (or ditch their drivers) and opt for a two-wheel ride.

Every once in a while, we come across real life heroes who believe in spreading love beyond the parametres of screen, the efforts and contribution of celebrities who have always gone above and beyond. From Faysal Quraishi to Umair Jaswal, here’s recognising extraordinary gentleman who have always opted for giving back to the community.

FAYSAL QURAISHI — with a reach of 1.1 million Instagram followers, actor Faysal Quraishi’s journey is one that will go down in history. He has been the centre of attention ever since he entered the entertainment industry of Pakistan; many admire him not only for his impeccable acting skills, philanthropic work and looks but also for his overwhelming passion for heavy bikes. Often seen riding his Harley along the streets of Karachi and even to different cities including Hyderabad, Sehwan Sharif and Khunjerab with his riders’ groups, Quraishi has turned his passion for bikes to much more. Part of almost every rider’s group including some of the most famous ones HOG, HOG Pakistan and The Tribe ‘MC’, the superstar has and continues to raise funds and highlight various causes. As part of ‘Ride For A Cause’ campaign for Shaukat Khanum Hospital, Quraishi and his fellow riders raised a generous amount for charity. You can only begin to imagine the impact he has brought about with his passion.

Every once in a while, we come across real life heroes who believe in spreading love beyond the parametres of screen, the efforts and contribution of celebrities who have always gone above and beyond

UMAIR JASWAL — Jaswal draws eyes no matter what he does. Whether it’s performing LIVE or going to the gym, the Rockstar is always seen in style. Jaswal can also often be seen swapping out a suit for some leathers. Riding for him is therapeutic. When he rides, he has this connection, a relationship with the environment where he gets to experience everything as a part of it. Be it rain, sunshine or fog, he becomes a part of the environment when he rides and that really calms him. Recently, he was spotted enjoying Karachi winters on his Harley Breakout CVO 110 and there’s no denying that it was a treat for everyone. Jaswal is also a part of many famous riders’ groups. His recent Birthday gift to himself was a Harley Davidson Custom 48 Sportster. A passionate devotee of riding you might get a glimpse of Umair and his fellow devotees on the streets and byways of Islamabad. However, nothing beats seeing this Rockstar supporting and spreading smiles especially among children. Some of his famous contributions include Ramzan Dastarkhwan, an initiative of CDRS – Comprehensive Disaster Response Services that distributed Iftar amongst 300 to 400 people every day including patients from PIMS hospital. Apart from their Ramzan initiative, Jaswal with CDRS runs a multitude of initiatives that offer support to underprivileged children, laborers and widows as well. He was also a part of Hunehar Welfare School’s ‘Annual Iftar and Eid Gifts Distribution Ceremony’. Jaswal has been working very closely with them in expanding the welfare school and we are thankful to him for showing us how to keep making a difference in the lives of those in need.

AIJAZ ASLAM — like his friend Faysal Quraishi, Aijaz Aslam is also very passionate for bikes and his passion started during college days with trail bikes. He first had a Yamaha Enduro then a KE 175, following which he went for Honda Road Master 185. Later on, he realized that he felt more connected with cruiser bikes and that’s primarily why he never opted for a racer bike. He bought a Honda Magna 750; it’s a beautiful bike but since his passion for Harley Davidson simultaneously grew, he started saving money for his first black beauty – a Harley Night Rod. After a couple of years he switched to V Rod Muscle. Recently, Aslam switched to the ultimate Harley Davidson Road King which he mentioned at multiple places, he enjoyed the most.

Feeling energised and inspired? Get out there and ride!