The event will take place in London on Saturday, April 11, the group announced on social media.

‘We as LGBTQI Muslims often find ourselves isolated, without community and frequently facing homophobic, biphobic, transphobic AND Islamaphobic abuse,’ Imaan explained in a crowdfunding campaign statement. ‘The event will build on the incredible events we organised in the past and feature panels, discussions, speakers, arts, culture and history – a first for LGBTQI Muslims.’ 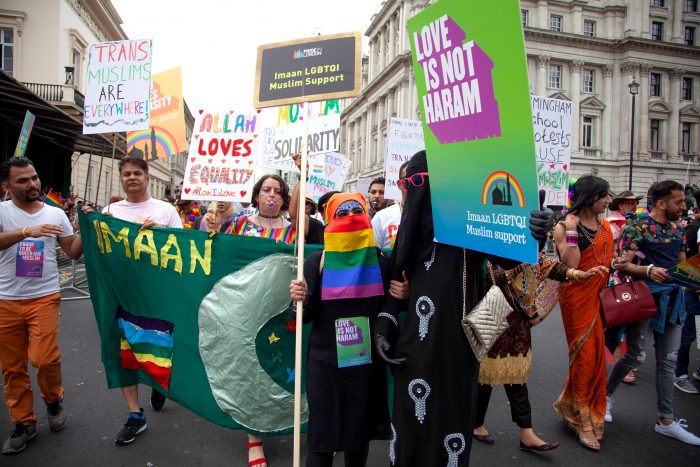 In 2019, Muslim LGBTQ+ charity Imaan successfully raised £10,000 via crowdfunding to make the event happen, and recently announced the date of the event via Twitter.

British-Iraqi writer Amrou Al-Kadhi said in a press release:  “The media has tried to control the narrative about queer Islamic identities for too long, often thrusting us into a horrific culture war, as if Islam is the mortal enemy of queer identity.

“ImaanFest, Muslim Pride is the perfect counter-narrative, revelling in the joys of queer Muslim identities, and giving us the chance to make our own space.”

Imani added: “LGBTQIA+ Muslims are as beautiful and naturally occurring as the rainbow that represents us.

Tickets range from £5 for those on lower-incomes to £20.

The full-price tickets include both lunch and dinner as well as all sessions, panels and evening entertainment.

Tickets for Muslim Pride will be going on sale in the next couple of weeks, and the charity has put a call out on Twitter for queer Arab speakers, wellbeing practitioners, service providers who would like to get involved with the event. LGBTQ+ Muslims are also invited to contribute to an oral history project which will feature in the celebrations.