On August 5, 2019, in utter disregard of the mutual treaties between India and Pakistan, and in violation of international laws, the Indian government, under Prime Minister Narendra Modi, annulled Article 370 and 35A. The illicit act of scrapping the special status of Kashmir is followed by the longest violent curfew, turning the whole valley into the largest jail of the world, cutting down communication and cellular networks, paralysing life and depriving people of their basic necessities including food and medicine.

As curfew entered into its 198th day on February 18, 2020, heads were bowed in anguish, eyes were shedding tears, and deep silence prevailed in the auditorium of the Pakistan Institute of Parliamentary Services (PIPS), Islamabad, as a short documentary on the brutalities of Indian forces was played on a large screen before the formal launch of Senator A Rehman Malik’s book Bleeding Kashmir. Though the brutalities of India have continued since 1947 when the valley of Kashmir was left as a disputed territory on partition of the subcontinent based on the “Two Nation Theory”, these atrocities increased manifold under Prime Minister Modi. He has a background of being a hardcore activist of the RSS and has his hands stained with the blood of the innocent Muslims of Gujrat.

It is time to bring an end to Indian brutalities against the oppressed people of Kashmir who are recipients of volleys of pain, wounds, distress, death and difficulties hurled on them, yet we find them standing firm and brave, struggling for their legitimate right of “azadi” -freedom that under the United Nations charter is a basic human right.

Senator Malik’s book Bleeding Kashmir was launched in a simple but a sombre ceremony wherein solidarity was expressed with Kashmiris. The plight of voiceless people was highlighted, the issue was discussed in detail from the legal perspective, and the real cruel face of Modi was exposed before the diplomatic fraternity. Malik has never remained silent over human rights violations all over the world; he has been very vocal against extremists and terrorists and is famous for naming Taliban as “zaliman”(thecruel). He penned Modi’s War Doctrine before the general elections in India in which he had forewarned the world that if Modi came into power, he would be causing unrest, chaos and instability in South Asia that would eventually devastate the peace of the whole world. He also predicted that Modi would be following and implementing the RSS agenda of Hindutva, which is suppressing and sidelining Indian minorities including lowcaste Hindu groups, to establish the supremacy of uppercaste Hindus.

Bleeding Kashmir also exposes Modi’s anti-Muslim and anti-Pakistan mindset, the Hindutva ideology, and his motives behind his recent actions with regard to Kashmir

All of Malik’s predictions were proved correct. Soon after taking charge as the prime minister of India for the second time, Modi abrogated Article 370 and 35A, and managed a verdict by the Indian Supreme Court to construct Ram Mandir on the site of the Babri Masjid. Recently, Indian parliament passed the discriminatory Citizenship Amendment Act (CAA). Modi’s War Doctrine proved the complete behavioural anatomy of Modi’s moves; Malik had predicted his post-election anti-Kashmir, anti-Muslim and anti-minorities actions.

Bleeding Kashmir also exposes Modi’s anti-Muslim and anti-Pakistan mindset, the Hindutva ideology, and the motives behind his recent actions with regard to Kashmir. It provides a deep insight on the fanatical Hindutva ideology inflicted by Modi and his abettors. Bleeding Kashmir speaks about the ruthless and barbarous conduct of Indian authorities towards the unarmed Kashmiri men, women and children. It exposes Modi and his forces’ cruelties against the innocent Kashmiris in terms of mass murders, mass blinding, forced disappearances, torture, rape, political repression, and suppression of freedom of speech. It says that Modi has been the by-product of hardcore militancy monitored by the RSS; his mindset is nothing but war and terror, which has converted the Kashmir issue into an even more complex one by demolishing its legal status. Crimes by militants are said to be incomparable with the larger scale abuse by the Indian state forces. 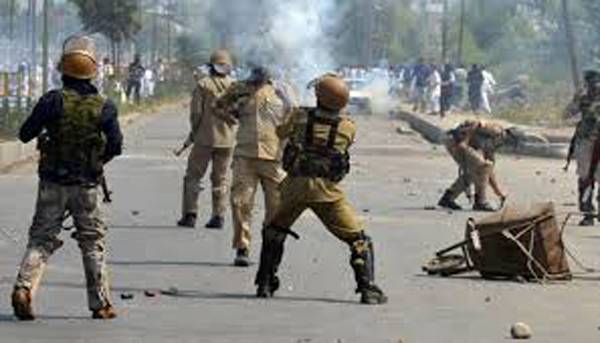 Senator Malik also enlightens his readers about the inaction of the United Nations vis-à-vis the implementation of the UNSC Resolutions on Kashmir. He also elaborates the Indo-Pak fifth Generation warfare dimensions. Bleeding Kashmir argues how Modi is liable to be tried in the International Court of Justice (ICJ) and the International Criminal Court(ICC) for his heinous crimes against humanity. The author lauds Gambia for filing a case against Aung San Suu Kyi, leader of the ruling National League for Democracy of the Republic of Myanmar, for massacre of Rohingya Muslims. Malik urges the government of Pakistan to seek the prosecution of Modi and his accomplices at the ICC for their crimes against humanity and genocide in the Indian-occupied Kashmir (IoK).

Malik writes that if a small country like Gambia can stand for Rohingya Muslims why can’t Pakistan go to the ICJ and ICC for their oppressed Kashmiri brethren. He also questions the silence of the United Nations, the Organisation of Islamic Conference and international human rights organisations. He calls upon the international community to take notice of gross human rights violations in the IoK. He writes that Indians have been persistently refusing human rights organisations to visit IoK and is continuously committing violations without any fear. India has totally ignored the investigative observations of the international community.

Bleeding Kashmir contains a wealth of knowledge regarding the geopolitical nature of the Kashmir dispute and is very informative. It gives a deep insight about enhancing and advancing steps to reveal human rights violations being continuously committed by the Indian government.

The writer is an activist from Parachinar. He tweets @RiazToori