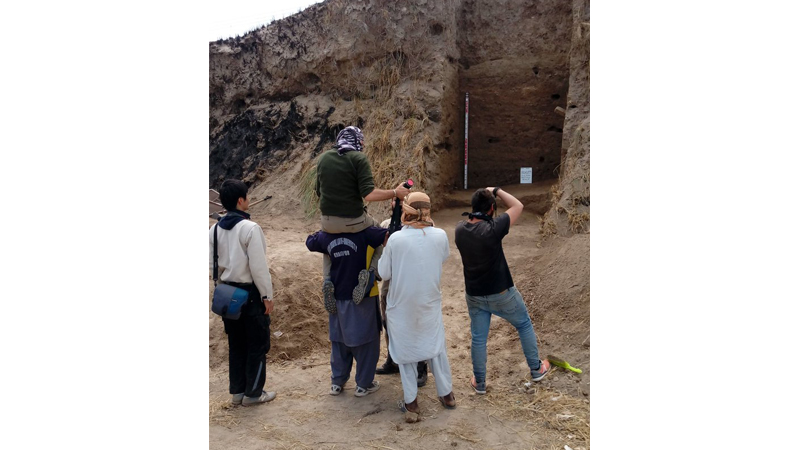 A tomb, which is approximately 30 kilometres away from Larkana, left with no caretaker seems like a grave of an ordinary man. Its walls are not reconstructed and painted which makes a visitor uncomfortable to be there for much time. Tomb is bit charred from its inside. Its door is like a mere place of entering but without wooden block. Little chunks of masonry are lying on the flour. It’s out-view, which doesn’t cover much area afford only 9 or 10 people to stand easily there, is little bit grassy land but mostly filled with sand. Its mound’s colour is vanishing and is near to have dent on its surface. It is quite vivid to people of village “Panjo Goth”, which is at 10 kilometres away from tomb, because it is built on high place. This shrine is of unsung hero “Rato khan Jalbani”, who laid the foundation of Ratodero, now taluka of district Larkana, known as Bhando Qubo or Bhande Jo Qubo.

Rato Khan Jalbani was the son of Sardar Sohbdar Khan Jalbani. After his father, he became his father’s successor. Current chief of Jalbani nation, Sardar Ali Nawaz khan Jalbani, is from the Rato khan’s breed. Basically, Rato khan was a warrior and waged the number of wars with those who came in his way to defeat him but all were defeated. He came through Iran to Ratodero and made their huge fort named “Rato Fort”. In 18th century, Ahmed shah Abdali assaulted on Ratodero and beheaded the Rato khan Jalbani because Rato khan mobilized his people to fight against the Pathan marauders, who deliberately prompted the violence and waged the wars over weaken ones. Ahmed Shah Abdali took the head of Rato khan with himself and left his body headless there. Danish Jalbani, cousin of quo-chief of Jalbani nation, said that scuffle between Ahmed Shah and Rato khan was over a lady. He, further, said that the lady was from the Syed family. She was captured by Ahmed shah Abdali and fled from Ahmed’s prison and came under the protection of Rato khan. So, Ahmed shah Abdali attacked on Ratodero. Bhando Qubo is remained the influx of strangers, who left their homes due to scarcity of water and migrated to Ratodero, because at that time Sukkur river’s branch was shared to Ratodero. Many foreign and domestic archaeologists Dr. Ghulam Moihuddin Veesar, the professor of archelogy department of Shah Abdul Latif Khairpur University, Dr. Qasid Mallah and professor Marco Madella, University of Barcelona, excavated the Bhando Qubo for finding the secrets. Many old things were found by excavating which helped to come easily on finding that it is as ancient as Indus river, Dr. Mallah said to tribune express. According to Dr. Ghulam Moihuddin that this tomb is treasure of secrets and was buried with unfound mysteries that attracted to foreign archaeologists to reach to Bhando Qubo for excavation. One of indigenous people of that site said that Bhando Qubo is 2nd oldest place in Larkana, on first is Moen jo daro, which witnessed many researchers and archaeologists across the world for excavation. While talking to reporter of express news, Gul Bahar sheikh, said that Bhando Qubo is the grave of Shaheed Sardar Rato khan Jalbani, whose name is labelled on city called Ratodero. He, further, told that many people still visit that shrine and remind the backdrop behind the tragedy and feel proud to have such a Brave hero, who fought with invaders die in a ditch.

The word Bhando means a body without a head; it is taken from Sindhi which means a torso. Because, Ahmed Shah Abdali executed Rato khan Jalbani, that’s why, it’s named Bhando Qubo. This place holds a lot of meaning for the inhabitants of Ratodero because this tomb is the sign of the city’s existence

The word Bhando means a body without a head; it is taken from Sindhi which means a “torso”. Because, Ahmed Shah Abdali executed Rato khan Jalbani, that’s why, it’s named “Bhando Qubo”. This place holds a lot of meaning for the inhabitants of Ratodero because this tomb is the sign of the city’s existence. Notwithstanding the hero, he’s still unsung across Sindh. His shrine is still not retouched for construction.

The writer is a student of mass communication at Sindh University. He can be reached at safdarlatif0@gmail.com