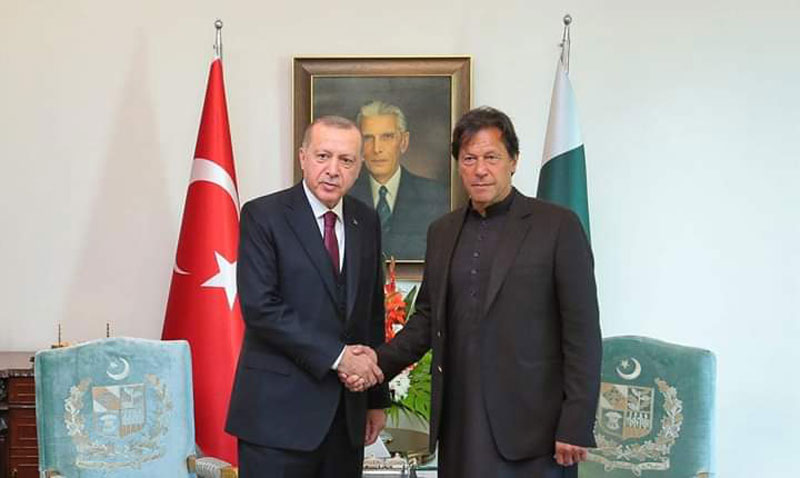 Pakistan and Turkey on Friday agreed to further strengthen bilateral cooperation in diverse areas such as trade, energy, infrastructure, health, culture and tourism.

“We have to benefit from the experience of Turkey especially in the tourism sector through which it generates US $35 billion revenue every year and construction for affordable housing,” Prime Minister Imran Khan said while speaking at a joint press stakeout along with Turkish President Recep Tayyip Erdogan here at the PM House.

The prime minister said since Turkey has achieved advancement in the construction sector and has the experience of developing slums, Pakistan wants to benefit not only from it in affordable housing but also from the way they boosted their economy, checked debts, including the IMF loans, and did a turnaround. He said as giving jobs to the youth is very important for Pakistan, it will also benefit from the Turkish experience of industrialization.

President Erdogan said he has great pleasure to visit the brotherly country after three years and considered Pakistan as his second home. He said holding yet another meeting of the HLSCC is the most important signal of Pak-Turkey strategic relations. He said the signing of 13 MoUs and documents is the most important indicator of the close relationship between the two countries.

President Recep Tayyip Erdogan recalled the visit of Prime Minister Imran Khan to Turkey and said the two sides have agreed to take the bilateral trade to the level of US $ 5 billion by 2023. The strategic economic framework and the action plan provided a roadmap to what the two countries should do for economic partnership, he added.

President Erdogan said Turkey is ready to support Pakistan in the areas of transport, energy, tourism, healthcare, education and law enforcement, which would help boost its socio-economic development. He expressed his confidence that Prime Minister Imran Khan will not spare any effort to improve business environment in his country.

Assuring all-out support to Pakistan, President Erdogan said, “Turkey stands next to Pakistan like yesterday and will do so in future as well.” He said the messages of solidarity and condolences sent by the Pakistani leadership as well as their support after the recent earthquake in Elazig province of eastern Turkey is an example of the connection and affection between the two brotherly nations. He described handing of Fethullah Gulen’s schools in Pakistan over to Turkey as another symbol of solidarity.

The Turkish president termed Pak-Turkey cooperation in defence the ‘most dynamic’ area of bilateral cooperation. He said Turkey is ready to contribute in good relations between the two brotherly nations of Pakistan and Afghanistan. He said Turkey is disturbed to see the situation in Indian-held Kashmir (IHK) deteriorating due to unilateral Indian actions. Turkey is in favour of finding a peaceful solution of the issue through dialogue between Pakistan and India in line with the United Nations resolutions as well as the expectations of the people of Kashmir, he added. He also appreciated Pakistan’s contribution and role in the fight against terrorism as well as for peace and stability in the region.

President Erdogan thanked the government and the people of Pakistan for the hospitality extended to him and his delegation, and said he wishes and prays that the MoUs signed between the two countries bring good results.

Prime Minister Imran Khan said the people of Pakistan are very happy on the visit of President Erdogan and especially liked his address to the joint session of parliament. “If President Erdogan participates in Pakistani elections, he will clean-sweep the polls,” he remarked.

The prime minister thanked the Turkish leader for raising his voice for around eight million Kashmiri people, who have been under siege for over six months with leaders and teenagers put behind the bars in the occupied valley. He hoped that the signing of Strategic Economic Framework as well as the MoUs by Pakistan and Turkey will herald a new era of trade and economic cooperation between the two brotherly countries.

The prime minister thanked Turkey for supporting Pakistan on the issues of Kashmir and Financial Action Task Force, and said the two brotherly nations backed each other at international forums.