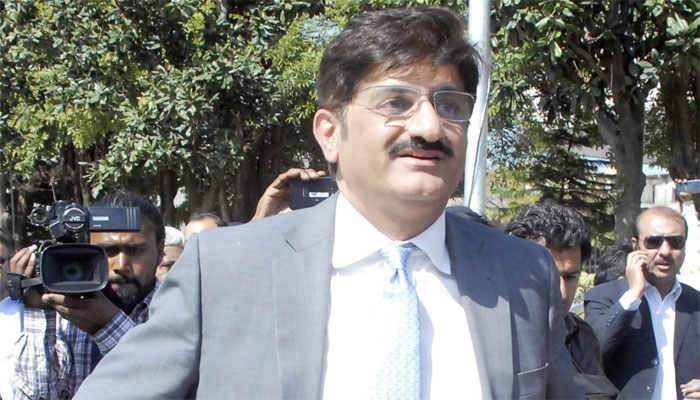 “Therefore, a new plan to manage traffic in Saddar, Metropole, Clifton and I I Chundrigar Road is need of the hour.”

This he said while presiding over a meeting regarding Traffic Management in the city here on Wednesday at CM House.

Commissioner Karachi gave presentation to the chief minister in which different options of one-way, removal of signals and installation of new signals were suggested.

The chief minister said that only declaring the Club Road as one-way was not enough. “We will have to adopt holistic approach by removing traffic congestion and jams from the entire area.

Shah suggested that the choking points at Metropole, Avari, I I Chundrigar Road have to be removed with best traffic engineering. The construction of flyover and underpasses were not the appropriate solutions, he said.

The chief minister said that from Shaheen Complex there were two roads leading to Fawara Chowk and both the roads, Governor House Road and PIA Office road have been allowed two ways. Therefore, both the roads remain choked at rush hours. Similarly, the traffic coming from Fuwara Chowk and Saddar gets choked at Avari. Why traffic from Shaheen Complex to Avari via Fuwara Chowk and Saddar towards Avari has been allowed to create jam at Avari and Metropole hotel. Why some traffic of Saddar could not be diverted towards Army Selection Center towards Shahrah-e-Faisal from Regent Plaza Area. Why traffic coming from Fuwara Chowk is not allowed going directly towards Clifton without moving around Metropole, he asked.

It was decided that Commissioner Karachi, Adl Ig Karachi, DIG Traffic and other officiers would visit entire area and assess the situation and adopt an option could be adopted to remove unnecessary traffic diversion and congestion.

Shah gave three months to the team not only work out a feasible plan of traffic management but implement it from June 2020 when schools go on summer vacation.

He hoped that upon the completion of the New Civil Hospital in Mirpur Khas a complete NICVD Satellite Center can be developed.

He explained that heart disease satellite unit and chest pain unit were a long-standing demand of the people of Mirpur Khas.

Zulfiqar said that the new Civil Hospital would provide service to more than five million people of Mirpur Khas Division.

And, he added, the establishment of chest pain unit at old civil hospital would be beneficial to the people of Mirpur Khas, Omar Kot, Khapro, Jhodo, Tando Adam, and Tandwal Hariar.

Unfortunately, he added, the closest NICVD locations to Mirpur Khas are Tando Muhammad Khan and Hyderabad and it takes a minimum of two hours to reach there.

“And very often, emergency patients suffering from heart attacks do not get to receive medical attention in time,” said Zulfiqar.

It is estimated that 30 to 40 percent of all deaths in Pakistan were caused by Cardiovascular Diseases (CVD) amounting to 200,000 people in the country.

There is no doubt that these numbers can drastically be curtailed if medical facilities are made easily available to all Pakistanis, he added.

Separately, Chief Minister Sindh Syed Murad Ali Shah said that the society which did not ensure and protect the rights of women would never progress. He was the chief guest of an event organized by the Sindh Commission on the Status of Women (SCSW) with support from UN Women Pakistan to celebrate National Women Day here on Wednesday. The Chief Minister said, “Sindh government has institutionalized gender equality in the province. Highest number of pro-women laws including Sindh Child Marriage Restraint Act, Domestic Violence (Prevention and Protection) Act 2013, and many others have been passed in the province.”

Chairperson SCSW Nuzhat Shirin welcomed the participants and thanked donors for their support in strengthening Commission to achieve its goal. She said that Sindh was the only province to have passed most pro-women laws and set an example for other provinces. “But, there’s still a long way to go as we set to develop sustainable systems that will empower women economically, socially, culturally and politically.” Education remains a high priority area for all our work in Sindh, she concluded. Provincial Minister WDD Syeda Shehla Raza said, “WDD has worked to end violence against women and girls by preventing and promoting women’s rights in Sindh through legislation. We are now sensitizing women on the law of harassment at workplace and ending child marriage so that women and girls of Sindh reach their full potential.”

She also highlighted the need of facilitating women at work by establishing daycare centers, lactating rooms for breast feeding mothers and separate washrooms for women at workplace. Sindh government is committed to safeguard the rights of women and will continue to advance gender equality in the province, the Minister remarked. Deputy Country Representative UN Women Pakistan Aisha Mukhtar said, “UN Women believes in an equal inclusion of women in all spheres of life with focus on five priority areas that are increased women’s participation and leadership, ending violence against women and girls, women participation in peace processes and security efforts, women economic empowerment and governance and national planning.”

“UN Women Pakistan has been supportive of SCSW since its establishment. We have provided strategic assistance in developing Commission’s three-year strategic plan and are continuously working with the Commission and WDD Sindh in order to end violence against women and advance gender equality and women’s social and economic empowerment in the province.”

Australian Deputy High Commissioner to Pakistan Brek Batley said, “Australia has employed a holistic approach to reducing violence against women through institutional strengthening, policy advocacy and service delivery. Sindh Commission on the Status of Women, established through Australia’s AUD 11 million support, has not only advanced gender equality in the province but also created an enabling environment for pro-women laws, including the Sindh Protection Against Harassment of Women at Workplace Act, the Domestic Violence Bill, Child Marriage Restraint Act, Sindh Dowry Act and Sindh Acid Control and Acid Crime Prevention Act.”