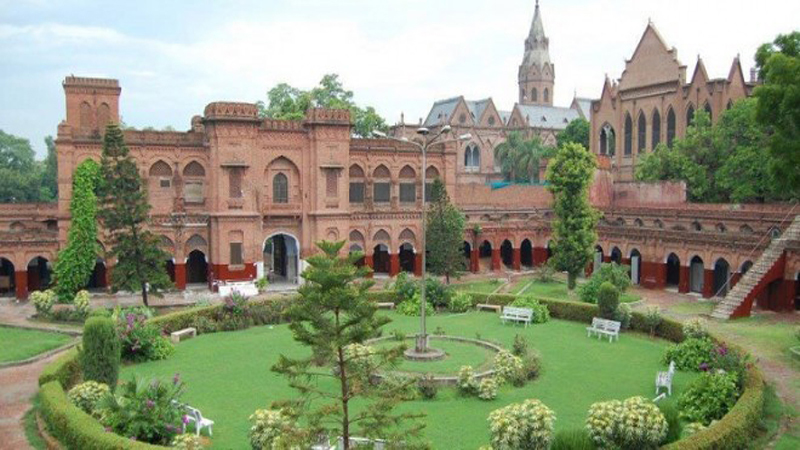 Students and faculty members of Government College University Lahore on Tuesday formed a human chain after a seminar held at the University’s Bukhari Auditorium to express solidarity with their brothers and sisters of Indian-held Kashmir, support their ongoing struggle against human rights violations, and pay homage to the Kashmiri martyrs who lost their lives fighting for their freedom.

Speaking on the occasion, Mr. Hamayun Zaman Mirza said that silence of international community over bloodshed and severe human rights violations in Kashmir was criminal; more than 10,000 women and children were stilling missing in valley and nobody knew that whether they were alive or not. Vice Chancellor Prof. Asghar Zaidi called upon Pakistani youth to become a voice of their Kahsmiri brothers and sisters, and highlight this human issue on all platforms including social media.

Dr. Saadat Saeed shed light on the history of Kashmiri freedom struggle, saying that peace in the region was not possible without giving Kashmiris right of self-determination in the light of UN resolutions. Mr. Khaylan Singh said that minorities were safer in Pakistan than India. He said even Sikh community was being oppressed in many areas of India. He said that the Indian Citizenship Act 2019 had proved Quaid e Azam Mohammad Ali Jinnah was right. Mr. Azhar Ifthikhar highlighted a need for exposing the propaganda being spread by India through its media and social media. Moreover, Punjab University Vice Chancellor Prof Niaz Ahmad has urged the United Nations to implement its resolutions on Kashmir to resolve the issue and called upon human rights organizations to take serious notice of human rights violations in India-Held Kashmir. He was addressing the participants of rallies from various departments of Punjab University which concluded outside VC office here on Tuesday. A large number of teachers, students and employees participated in the rallies. The participants were carrying flags of Azad Kashmir, banners and posters expressing solidarity with Kashmiri people to mark Kashmir Solidarity Day. Pro Vice Chancellor Prof Dr Saleem Mazhar, Prof Dr Mumtaz Anwar Chaudhry, Registrar Dr Muhammad Khalid Khan and other officials also participated in the rally. “This world is called a “civilized world” but what is happening in Kashmir and India?” said PU VC Prof Niaz Ahmad, adding that this PU assembly passed a resolution that UN must implement its resolutions to resolve Kashmir issue. He said that the way Pakistan government and Kashmiris were fighting Indian oppression guaranteed that Kashmir’ independence was inevitable. He said that Pakistan did not want war but it should not be taken as weakness. He said that this region could not afford war. He said that dialogue was the only solution to resolve such issues. He said that the nation stood shoulder-to-shoulder with the government, Pak Army and Kashmiri people.