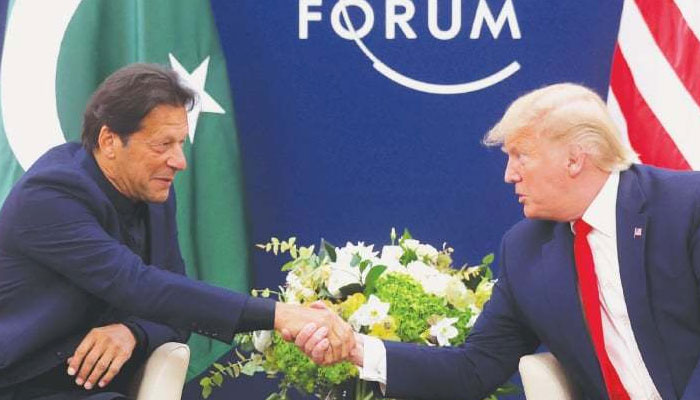 Foreign Minister Shah Mahmood Qureshi on Wednesday said that the US president assured the Pakistan premier of cooperation in trade and a US delegation would visit the country for the very same purpose.

In a statement received here over the visit of Prime Minister Imran Khan to Davos to attend the World Economic Forum, the foreign minister said the meeting between the US president and prime minister Khan was very constructive which lasted for about an hour in which the prime minister raised certain important issues.

The foreign minister is among the members of prime minister Imran Khan’s delegation during the visit.

The foreign minister said during the meeting, Pakistan raised the issue of Financial Action Task Force (FATF) and the prime minister informed President Trump about the steps taken by Pakistan in this regard. The US president was urged to support Pakistan over the issue.

The prime minister also discussed the situation in the Indian-held Kashmir and the US president assured that he will discuss the issue with India. Trump also expressed his concerns over the situation in the occupied valley and said that issue should be resolved, he added.

The prime minister asked the US president about improvement in the travel advisory and also discussed the trade between the two countries. It was agreed during the meeting that a US trade delegation will visit Pakistan soon, he added.

Qureshi said President Trump was informed about Pakistan’s concerns over the issue of Iran and the negative impacts it can cause on Pakistan. The Afghan issue and moving peace and reconciliation process forward also came under discussion, he added.

The US president expressed his confidence and liking for the prime minister, the foreign minister said, adding the meeting took place in a very cordial manner which was also attended by the members of the US delegation.

Separately, Foreign Minister Qureshi held a telephonic conversation with British Foreign Secretary Dominic Raab and had a wide range of discussion on regional and bilateral issues of mutual interest. He briefed the British foreign secretary on the evolving security situation in the region and shared Pakistan’s concerns with regard to latest developments in the Middle East/Gulf region, which carry serious implications for peace and security as well as world economy.

The foreign minister emphasized the importance of maximum restraint and steps for de-escalation by all sides, a Foreign Office statement issued here said. He also apprised the foreign secretary of Pakistan’s efforts to defuse tensions in the region through active diplomatic engagement with relevant parties.

The foreign minister highlighted grave human rights and humanitarian situation in the Indian-held Kashmir (IHK), and urged the UK to play its role in peaceful resolution of the Jammu and Kashmir dispute.

Foreign Minister Qureshi briefed his British counterpart on Pakistan’s efforts in the peace and reconciliation process in Afghanistan. He invited Foreign Secretary Raab to visit Pakistan at his earliest convenience.

The British foreign secretary appreciated Pakistan’s efforts to support defusion of tensions and secure peace and security in the region. He also highlighted the positive trajectory of Pak-UK relations and expressed the hope that these will continue to strengthen in the years ahead.

The two foreign ministers agreed to continue to work together to strengthen bilateral cooperation and to ensure peace and security of the region.