A waning vocation of pottery 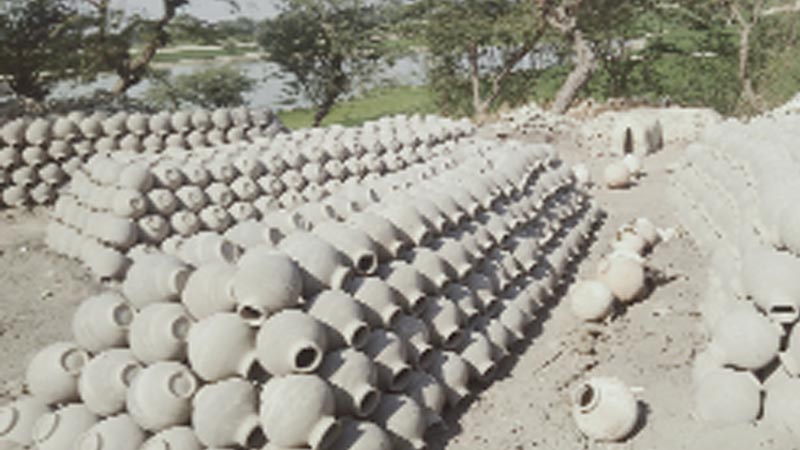 One of the world’s largest civilisations, Mohenjo Daro was discovered after some villagers brought some broken pottery to Archaeological Survey of India director general Sir John Marshall around 1924.

This showed that the profession of potter dates back to 5000 BC and was in practices in Sindh and other parts of Pakistan even before Moen Jo Daro Civilization. And Since ancient times the profession of pottery has been an exquisite art, sociocultural and economic activity. Before industrial revolution and in case of rural peripheries of the remote crannies of the world the potters catered for the need of every household. In Pakistan the pottery made pots were used for drinking, cooking, milk churning at house hold level and during marriages parties and other cultural and family celebrations. But slowly and gradually plastic, steel and crockery made household use item replaced almost all these needs.

However, in rural parts of Sindh, potter still make different kinds of pitchers, chilms or hukahs, bhandaras, decoration items, vases and pot for milk churning to be used at rural households’ level. But this profession is declining and with its decline potters are finding it very hard to continue their business. Johi town in Dadu District is popular throughout Pakistan for its whitish pitchers and beautiful Ghughies (an especially for keeping water highly cold during sizzling heat of extreme summer) which are still sold locally as well as in Balochistan and exported to Afghanistan through Quetta but their demand is meagre compared to thriving business in past.

Two decades ago, there were four kilns in Kumhbar Muhala, Johi Town where hundreds of potters worked hard to meet the ever increasing demand and lived prosperous lives. But as the steel and plastic made water coolers, glasses and other daily use items made their way to each house, the traditional business of pottery started waning in Johi Town as elsewhere. Now only one kiln is there where four groups of potters make and back their pots. In heyday of this business, the potters have to incur nominal expenses to make pots. They used soil from the nearby town but now after expansion of town most of the nearby fields have been turned into residential area. Remaining owners of the field have leveled their land and brought it under cultivation. Thus the potters have to order the soil from tractor trolley owners on 1000 to 1200 rupees per trolley.

The process of making pot is interesting and cumbersome at the same time. It takes hard work at many stages. First they (potters) have to filter the soil for separation of wood and other non-soil particles from the bought out soil. Then they mix water in it and knead the soil laboriously. After kneading, the balls of soil are placed under a plastic sheet. Form these balls pots are shaped on a potter’s wheel and placed these on under sun for drying. When they are half dried, the expert potter sprinkles some dry filtered soil over these pots and genteelly beats the body of the pot to give it full shape. These fully shaped pots are put under sun again to dry completely and finally are placed in kiln. For backing the pot in the kiln lot of fuel is needed. This fuel comprises 400 KGs of wood, 10 big sacks of dried skin of rice, and 10 big sacks of garbage containing cow dungs and other household waste all these a are used as fuel for a kiln. Around 2000 to 3000 unbacked pots are placed in a kiln for backing and the pots in killing need more or less whole one month period to fully back.

Two decades ago, there were four kilns in Kumhbar Muhala, Johi Town where hundreds of potters worked hard to meet the ever increasing demand and lived prosperous lives. But as the steel and plastic made water coolers, glasses and other daily use items made their way to each house, the traditional business of pottery started waning in Johi Town as elsewhere

And according to potter Ameer Bux Bhati sometime half of the pots crack or breakup during backing process in the kiln.

Previously cloudy and rainy season affected the potters business badly and caused lot of loss to their business but now they use plastic sheets to cover their pots during rainy season thus loss is avoided on great extent. But when pots in kiln are in backing process, the rain can still affect timely backing. Ameer Bux Bhati shared that “we sell our pots in local market as well as to the traders from Quetta which are sold in Quetta, Chaman, Dal Badeen and other parts of Balochistan and Afghanistan. Ameer Bux says that due to high costs of inputs, lower rates and low demand this profession is under threat. On average a potter hardly earns 8000 to 10000 per month and with a large family it is hard for them to meet two ends. He said that some time back, cultural department asked them to prepare some cups, vases etc.

The pottery is not only livelihood sources for the hundreds of potter’s family but is one of the rich cultural heritage of Sindh. With changed times this professional has high potential for business if concerned stakeholders, particularly government and non-governmental entities working on promotion of art, culture and handicraft pay attention to this completely neglected field. The potters can be trained on value addition and market demand. The potters already possess skill to make decoration material like vases, animal prototypes, cups and other decoration items. The cultural department and other relevant authorities must come forward to promote this profession which is on the verge of closure. The potters besides training must be provide with subsidy. After trainings, exclusive exhibitions should be arranged for their products or they should be invited and facilitated to bring their products and display these through stalls during various cultural events, celebrations and fairs. Furthermore a photo book and a website should be developed or the photos and videos of their products should be posted on official websites or on different official social media pages of the concerned departments. Ameer Bux Bhati shared that almost all of their elders experts in this business has passed away ore left the business in utter disappointment and most of the youth have preferred to shift to other livelihood sources as this business is no more profitable or even don’t meets their basic needs. He said that he is BA pass and is in search Job. If these few remaining individuals still sticking to their ancestral profession left their work, there would be none to carry out their cultural heritage and pass from generation to generation. There is urgent need to pay heed to this vocation before it’s too late.