This puppet government will collapse on its own: Bilawal 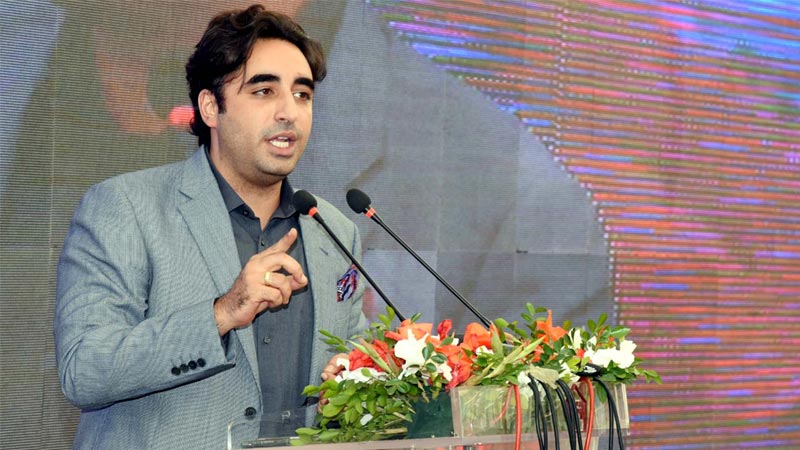 Pakistan People’s Party (PPP) Chairman Bilawal Bhutto Zardari has said that his party doesn’t need to topple this puppet government, as it will collapse on its own, while “we continue to serve the people”.

Bilawal expressed these views while addressing a gathering at the inauguration of the new 100 MGD water plant in Dhabeji. Calling out the double standards and hypocrisy that prevails in the federal government, he said that policies being followed were indicative of how it had bifurcated Pakistan.

He said the people of Sindh should not be punished for upending the plots of the selectors in the general elections. He added that whilst in Punjab, the inspector general (IG) is replaced with astonishing regularity, but when it comes to the powers vested in the government of Sindh by its people, the law changes and suddenly the province is beholden to those in Islamabad.

“Is Sindh still a colony that the viceroy in Islamabad needs to give approval for the daily affairs of the province?” he asked.

The PPP chairman said that the selected government had been in the power for over a year, but during this time the federal government has yet to complete any of the development projects it promised. “The incompetent government is dividing the nation, damaging the federation and instead of abusing others, it should pay heed to its assigned duties,” he added. He went on to say that the slogan of “Not two, but one Pakistan” was chanted by Shaheed Zulfikar Ali Bhutto, who had taken on the institutionalised cartels which were running the country and redistributed wealth, creating a sizable middle class. He said the PTI government may take much pleasure in plagiarising the slogan, but its policies had decimated the poor and middle class in favour of the prime minister’s crony capitalist friends.

He said the Sindh government had completed the work of lining over 1800 kilometres of canals to prevent the loss of water. “Sindh also has the largest number of reverse osmosis water plants in the country, providing safe and clean drinking water across small villages and hamlets across the province.” He pointed out that 101 villages of Achro Thar, a traditionally arid desert area, were now being supplied water through the Shaheed Mohtarma Benazir Bhutto Fresh Water Project, a pipeline that stretches over 240 km. He also added that work was underway to tackle the shortage of water in Lyari.

The PPP chairman said that Prime Minister Imran Khan had announced that he would set up desalination plants in Karachi, but did not spend even a dime, though the Sindh government with limited resources had taken steps to eradicate the water shortage in Karachi. He said that the federal minister had acknowledged on the floor of the assembly that the water share of Sindh was being stolen, but the issue had not been resolved as yet.

He pointed out that the policies of the Musharraf regime had left the country food insecure in 2008, but within a year, the PPP government, led by President Asif Ali Zardari, had transformed Pakistan from a wheat-importing country to a wheat-exporting country. The PPP chairman termed the present government a revival of the Musharraf regime and said that the country was now facing the same crises which the country was facing during Musharraf’s rule. “This government is a hostile government in every respect. It is hell bent on persecuting the poor and trampling on their rights as long as their friends and backers could make a quick buck. The present rulers have no empathy or even idea of the trauma and pain inflicted on the children, women and elders of those made homeless by the wrecking balls of their anti-encroachment drives. ” Bilawal said that according to the constitution, the first right to the resources of a province rest with the province itself. By overriding this right, the federal government is weakening the federation and the tearing the very fabric that holds this country together.

“We are not threatening anyone but telling them that we will not compromise on the rights of the people.”