* Buzdar grants approval to set up institute for blood disease 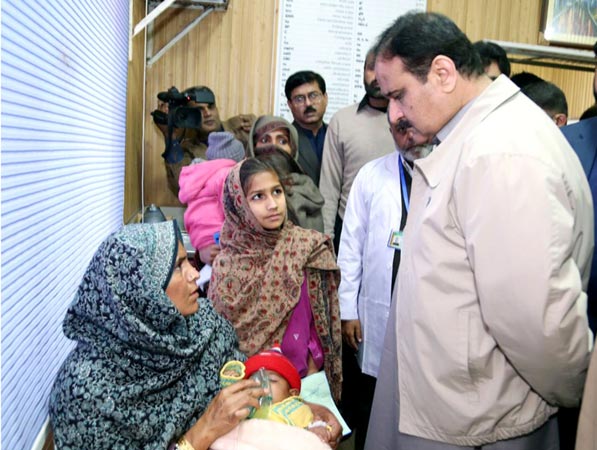 Punjab Chief Minister Sardar Usman Buzdar made surprise visits of Jaranwala and Sumandri on Sunday. He conducted raids of police station, flour sale points and hospitals. He reviewed situation and also checked cleanliness arrangements in both the cities.

He removed Assistant Commissioner Jaranwala from his post on complaints of inefficient performance and ordered to suspend Assistant Food Controller and SHO. Sardar Usman Buzdar also paid surprise visit to Jaranwala on Sunday. He also reviewed arrangements for the provision of flour to the general public at the sale points being set up by district administration. He shook hands with the people and inquired from them about the provision of flour and handed them over flour bags on behalf of Punjab government. Usman Buzdar on this occasion, took prompt action on the complaint of less provision of flour by the residents of the city and ordered to remove Assistant Commissioner Jaranwala from this post.

On his directions, AC Jaranwala has been made OSD and Assistant Food Controller Jamil Gujjar has been suspended from his service. Usman Buzdar while talking on this occasion said that Punjab government has surplus wheat reserves and there should not be any flour shortage. I represent the people and has come out in the field to ensure availability of flour. He also directed to increase sale points of flour in the city and said that flour is available at fixed rates at the sale points of Punjab government. He further said that he will take stock of flour situation by undertaking visits of different cities. Usman Buzdar made surprise visits of city police station Jaranwala. He shook hands with culprits detained in lockups and inquired about their problems. He visited different sections of police station and directed to further improve cleanliness conditions. He also directed that culprits should be given facilities according to rules and regulations which is their due right.

He also ordered to suspend SHO city police station Jaranwala and paid surprise visit of Tehsil Headquarters Hospital Jaranwala and inquired after under treatment patients in emergency ward. He also reviewed facilities being provided to the patients in the hospital and directed the hospital administration to provide best healthcare facilities to the patients. THQ Hospital Jaranwala will be upgraded, he added. Provision of free medicines to the patients should be ensured and should continue, he directed. He further directed that cleanliness in the streets of Jaranwala city should also be improved and recruitments on vacant vacancies should be done forthwith in order to improve cleanliness conditions. Later, Usman Buzdar reached Sumandri from Jaranwala suddenly and visited flour sale points and tehsil headquarters hospital. He also reviewed cleanliness arrangements in the city and himself distributed flour bags among the citizens at the sale points.

Surplus flour is available in Punjab, he maintained. 20kg flour bag is available at Rs805. Wherever less availability of flour comes to surface then strict action will be taken, he emphasized. People cannot be left alone under any circumstances and gave directions to the administration to further improve provision and availability of flour. “I have myself come out in the field to take stock of availability of flour and no one will be allowed to snatch the rights of the people”, he added. Usman Buzdar visited THQ Hospital Sumandri and inquired after under treatment patients and also asked about available medical facilities. He also asked problems of doctors and paramedical staff and granted financial aid for the treatment of children of two female patients. He directed that emergency should be functional 24 hours and emergency block is being upgraded. Paediatricians will also soon be available in THQ hospitals. 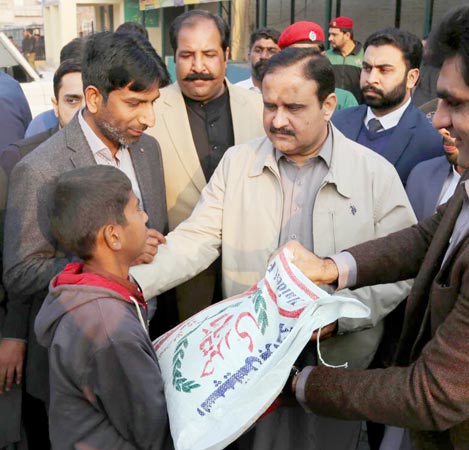 Usman Buzdar while talking with media after undertaking visit of hospital said that situation of wheat and flour in Punjab is much better and we have also increased supply of wheat to the flour mills. “I am myself present in the field and is well aware of ground realities and will allow no one to do injustice with the people”, he concluded.

Meanwhile, on the directions of Chief Minister Punjab Sardar Usman Buzdar, it has been decided to launch Punjab Institute for blood disease project in the province and Chief Minister Usman Buzdar has also granted approval for setting up Punjab Institute for blood disease. Usman Buzdar said that this project will be initiated from next fiscal year and funds for this important project will be allocated in the next financial year budget. He also directed that land should be earmarked soon for this project and necessary measures should be settled regarding this project so that work should be started on this project in the next fiscal year. Specialists should be consulted with regard to implementation on this project, he directed. PTI government wants to set up latest institute for the patients of blood diseases. Best medical care facilities will be provided to the patients admitted in this institute. Lives of those suffering from blood disease especially children will also be saved by making timely diagnosis. Setting up of this institute will prove to be an important milestone in the medical history of the province, he maintained. It has also been decided to make Bone Marrow Transplant Center Project functional soon at Bahawal Victoria Hospital Bahawalpur. Usman Buzdar directed to complete Bone Marrow Transplant Center Project on priority basis and this important project should be made operational during current year. He also directed to allocate funds for this project and no shortage will be made in the resources for setting up Bone Marrow Transplant Center. With the completion of this project, patients of South Punjab and from other adjoining areas will be greatly benefitted. PTI government is improving healthcare facilities to the optimum and our solid measures will prove to be beneficial in making quality healthcare system, he concluded. Provincial Health Minister Dr Yasmin Rashid, Chief Secretary Punjab, Senior Member Board of Revenue, Principal Secretary to Chief Minister, Secretaries of Specialized Healthcare & Medical Education, Finance, Primary & Secondary Healthcare, Information, Secretary Coordination to Chief Minister, Secretary Implementation to Chief Minister, DG LDA and concerned officials participated in the meeting.

Meanwhile, Buzdar visited Chak No. 16/69 Syedwala Jaranwala and participated in the funeral prayer of mother of his Personal Staff Officer Haider Ali.

Khateeb Badshahi Mosque Maulana Abdul Khabeer Azad led the funeral prayer and prayed for the departed soul. Usman Buzdar expressed his deep grief and sorrow with Haider Ali over sad demise of his mother and expressed his heartfelt sympathy and condolence with the bereaved family members. He also offered Fateha for the departed soul. The demise of mother is a big tragedy and her departure is will of Allah Almighty. There is no substitute of mother and the grief of her departure can never be forgotten. May Allah Almighty grant courage and fortitude to bear this irreparable loss. Provincial Ministers, MPAs, senior officials, relatives and a large number of people attended the funeral prayer.