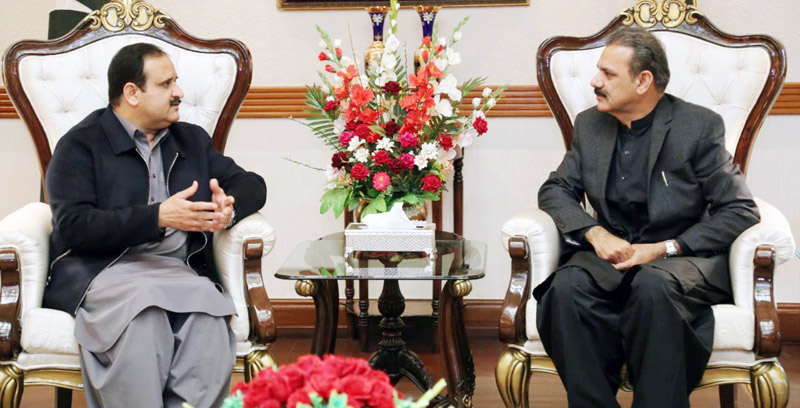 Punjab Chief Minister Usman Buzdar has taken strict notice of a news item aired on the media regarding the unnecessary increase in flour price in some districts of the province and directed to take immediate administrative measures for stabilizing the flour prices. He directed to immediately remove the Food Department officers involved in irregularities and negligence from duties. Usman Buzdar said that he will not tolerate the unnecessary increase in flour price at any cost.

On the strict instructions of Chief Minister, Punjab Food Department has initiated crackdown and took action against 376 flour mills and imposed an overall fine of Rs9 crore and 6 lac and suspended the license of 15 flour mills along with suspending the quota of wheat of 180 mills. Action has also been initiated against the food department officers for showing negligence in their duties and 4 such officers have been removed from their posts. District Food Controller Gujranwala Rohail Butt, District Food Controller Sialkot Nasrullah Khan Nadeem have been suspended while Deputy Director Food Department Faisalabad Kamran Bashir and District Food Controller Vehari Sagheer Ahmed have been removed from their posts.

On the instructions of Punjab Chief Minister Sardar Usman Buzdar, 126 sale points have been set up in different districts of the province for ensuring the smooth supply of flour. Flour is being supplied on the ex-mill rate at 21 sale points in Lahore division through trucks. Similarly, 55 sale points have been set up in Rawalpindi division where flour is being provided at control rate. Moreover, flour is being provided at nine sale points in Gujranwala division at control rate through trucks, at 17 sale points in Bahawalpur division and at 24 sale points in district Sialkot where flour is being provided at control rate. Usman Buzdar said that availability of flour to the people at fixed rates will be ensured. He directed to set up a monitoring cell in the Food Department for the strict monitoring of supply and demand of wheat and flour. He said that those mills will be sealed which involved in selling flour from government wheat in the open market. He directed officers of the food department and district administration to ensure the availability of flour at a fixed price. He said that chaki owners will not be allowed to increase the price of flour and action will be initiated against the violators. He directed to further strict the monitoring system at the exit points of the province and added that no leniency will be shown to anyone with regard to unwanted increasing in flour price.

He directed Minister Food to ensure the availability of flour in the market by going into the filed. He said that the government will not let flour price increase in Punjab. He said that the food department should submit report about their daily base initiative to chief minister office. I will not accept increase in flour prices at any cost and food department should take action to ensure the availability of flour in the market. An emergency meeting was held under the chair of Chief Minister Punjab at CM’s Office today, to review the demand and supply and prices of flour in the province. Provincial Minister Food Samiullah Ch. participated in the meeting through video link. Chief Secretary, Principal Secretary to CM, Secretary Food, Director Food and Secretary Information attended the meeting.

Separately, China-Pakistan Economic Corridor Authority Chairman Lt. Gen. (Retd.) Asim Saleem Bajwa called on Chief Minister Punjab Sardar Usman Buzdar at his office on Friday and discussed different matters including progress made on CPEC related projects. Both agreed to expedite the pace of work on CPEC projects. Talking on this occasion, Usman Buzdar said that establishment of CPEC Authority is a good step of Prime Minister Imran Khan adding that this would help to speed up the CPEC projects. CPEC is being moved forward in the real sense during the incumbent government and complete cooperation will be continued for early completion of CPEC projects in Punjab, he added. The chief minister said that special economic zones are being established to promote investment and industrialization and added that this project has been started in Faisalabad on an area spanning over thousands of acres. An investment to the tune of billions of dollars would be made in the province due to the establishment of SEZs, he added. Meanwhile, special incentives have been given to the investors and the government wants to develop Punjab as a hub of trade and economic activities, added Usman Buzdar.

The chief minister said that instructions have been issued for early start of Orange Line Metro Train as it would help the daily commuters to benefit from the facility of urban transport. He reiterated that China is a very trustworthy friend of Pakistan and added that Chinese cooperation for the progress of Pakistan is praiseworthy. He emphasized that CPEC will boost up economic activities in the region to generate colossal job opportunities. CPEC is a game-changer initiative which will pave the way for prosperity of the country. Completion of this wonderful project is a collective responsibility of all of us, he concluded.

Meanwhile, on the directives of Punjab Chief Minister Sardar Usman Buzdar, several steps have been taken to curtail the expenditures of CM’s Office.

In this regard, the chief minister said the wanton culture of lavish spending of the past conjurer has been given up by the PTI government. The past government used the public kitty as a personal stuff while the incumbent government has treated the resources as a sacred trust of the people. The unnecessary expenditures have been controlled to a large extent and the public money is being used on the welfare of the masses. Similarly, crores of rupees have been saved in the head of protocol and security, he added.