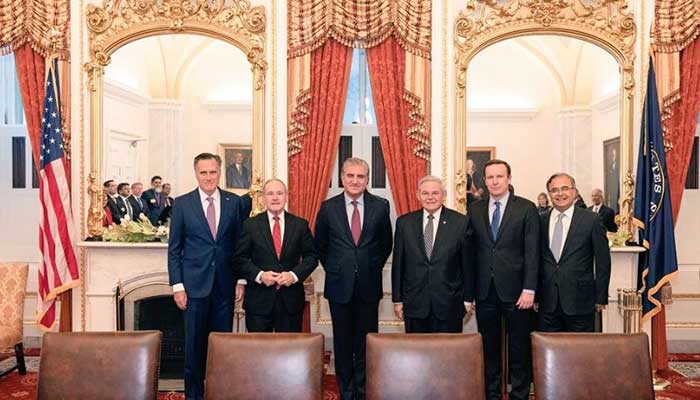 WASHINGTON: Foreign Minister of Pakistan Shah Mahmood Qureshi conducted a meeting with the US lawmakers in Washington DC on Thursday.

Foreign Minister had negotiations with the lawmakers on various topics including the US Pakistan relationship, circumstances in South Asia, Afghan peace and recent advancements in Middle East.

Discussed our bilat. relationship, Pakistan’s contribution to the Afghan Peace Process, recent ME tensions & India’s illegal lockdown in Occupied J&K with its implications for regional security until peaceful resolution in line with the Kashmiris’ right to self determination. https://t.co/E4EXotMd2R

He additionally briefed the US Senate management on India’s ongoing lockdown in occupied Kashmir, and “its implications for regional security”.

“Peace and stability in South Asia would remain elusive until the Kashmir dispute was resolved in accordance with international law and the wishes of the Kashmiri people,” Qureshi knowledgeable the senators, in line with a Foreign Office press launch.

The senators also lauded Pakistan’s role in the Afghan peace process and requested Islamabad for its continued support. The foreign minister assured the senators that Pakistan was committed to the Afghan political reconciliation process.

Qureshi noted that the history of Pakistan-US relationship was testimony to the value of working together. He reaffirmed Pakistan’s resolve to continue to play a constructive role and to work with the United States to bring peace in the region.

In the meeting, both sides shared their perspectives on the US-Pakistan bilateral relationship, the situation in South Asia, the Afghan peace process, and recent developments in the Middle East.

During the meeting, the two discussed various aspects of the Pakistan-US defence cooperation as well as the evolving regional situation.

According to the statement, Rood briefed the foreign minister about ongoing defence-related cooperation between the two countries.

Meanwhile, Qureshi brought the US undersecretary for defence up to speed on Pakistan’s efforts for peace and stability in South Asia, the statement added.