The United States of America and China have a decades-old trade relationship. The two countries established diplomatic relations in 1979 and signed a bilateral trade agreement. In 1984, the US was the third largest trade partner of china, and china was the fourteenth largest trade partner of the US. They started from four billion trade, and the volume of trade was about $600 billion in 2018.

Due to the US-China Relation Act of 2000, China was allowed to join the World Trade Organisation (WTO); in 2001, the US Congress approved the US-China trade agreement and China’s accession to the WTO. At that time the US government was of the view that China joining WTO would enhance and advance US’s economic interests. But since then, the US has continuously accused China of failing to comply with international trade laws, rules and regulations, and not addressing the grievances of Washington.

The current administration of the US is convinced that China has manipulated their currency, and trade, and US local companies cannot compete with Chinese companies without the US imposing a heavy tariff on Chinese exports. In 2017, the US had a $336 billion trade deficit with China against the overall $556 billion deficit. In view of that deficit, President Trump, who remains a critic of China in bilateral trade, has imposed 10 percent tariff of almost $300 billion on Chinese imports. As a counter-attack, China’s Ministry of Commerce announced plans to implement its own tariffs on 128 US products, out of which 120 products, such as fruit and wine, to be taxed at a 15 percent duty, while the remaining eight products, including pork, to receive a 25 percent tariff.

In the first half of the financial year 2019, US companies invested 6.8 billion dollars in China. The major part of that investment went into the Greenfield projects, electric vehicle maker Telsa in Shanghai, and other significant investments in manufacturing sectors. 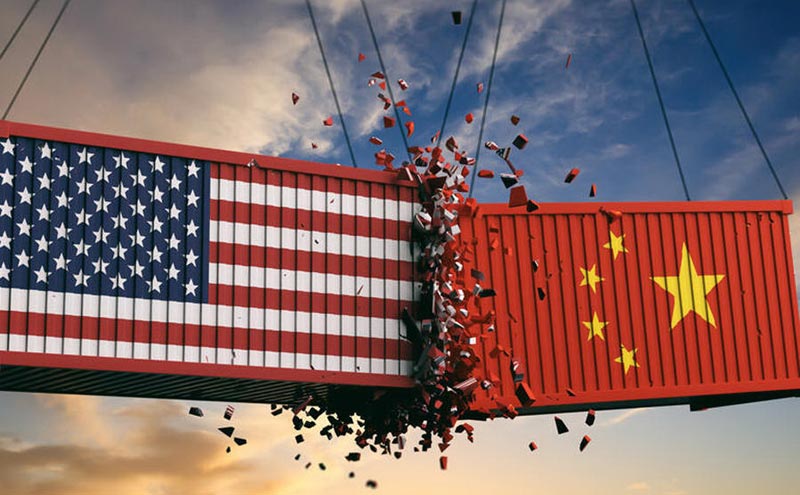 Due to the ongoing trade conflict between the two countries, American companies are now taking enormous risks doing business with China. That is not only because of the trade war; the other major reason is the pro-democracy protests in Hong Kong. Experts agree that China’s economic slowdown and trade conflict with the US have already created huge risks for business, and no major breakthrough is expected in the near future. The tariff imposed by China has a significant impact on American business in China too; small businesses, in particular, have been affected by the tariff. China’s tariffs have enhanced the cost of business 37 percent, or more than one-third small businesses across the US.

China offers tax incentives to motivate US companies to sustain and stay in China. It has announced that the exemption of payment of income tax for foreign companies from is under consideration. Some experts say that China’s exemption of certain taxes is a way to boost business as well as to counter US incentives.

Experts agree that China’s economic slowdown and trade conflict with the US have already created huge risks for business, and no major breakthrough is expected in the near future

Telsa, an automotive and energy company, has gained the confidence of China during the current trade dispute by giving China the status of owning the company. China thinks that the success of Telsa is not only because of the quality of its product but also because of the low level of pollution in China. Telsa also slammed the tariffs imposed by China, stating that its cars cost 60 percent more than its competitors.

Telsa Inc built a factory in China in less than a year; it is located near Shanghai. In view of the successful business, the company has manufactured the third model ahead of its scheduled production. It is expected that this development would help in the reduction of tariff and transport costs. Telsa Gigafactory in Shanghai is one of its most precious assets and is one of the major reasons of its growth. Now the company is claiming that the production of the Model Y will start almost six months before schedule in China.

The recent developments and negotiations have motivated investors that there is a trend of de-escalation between the two nations. J P Morgan is hopeful that things would move forward smoothly and without any further trouble. The company has offered various investment products. Paypal’s annual Cross-border Consumer Research states that at the start of a new year, Chinese shoppers enjoy new foreign things.

Despite the trade tension, China’s central bank has permitted US companies to take and make payments by the Chinese payment group Gopay. But Paypal has the licence to provide domestic and cross border web and mobile payment services in China. As per the People Bank of China, almost Rm 2b77($39tn) of mobile payments were made last year. PayPal has already successfully challenged the dominance of Chinese companies, and in future too, it will pay a vital role in payments of business transactions, in particular, cross-border payments.

The US-China Business Council survey concluded that 80 percent of US companies have been badly affected by the recent trade tensions between the two countries; only 20 percent companies are optimistic about their future prospects in China in the next five years. And it may take more than a decade for US companies to develop trust.

Some economic experts say that the trade war has entered phase two and that the tariff imposed by the US president and his Chinese counterpart have hit their own countries. Foreign Policy wrote that Washington needs a long-term plan to deal with Beijing. US companies say that they are not playing on an even field; they are also criticising that China is not fair to, but they are not going anywhere, and they will compete the heavy government subsidised domestic companies. Elon Musk, CEO of Tesla, says: “China is a future.”

The writer is a Karachi-based commercial and corporate lawyer and is working in a pharmaceutical company. He can be reached at khanlawyer@hotmail.com and https://twitter.com/Naeemkqaisrani