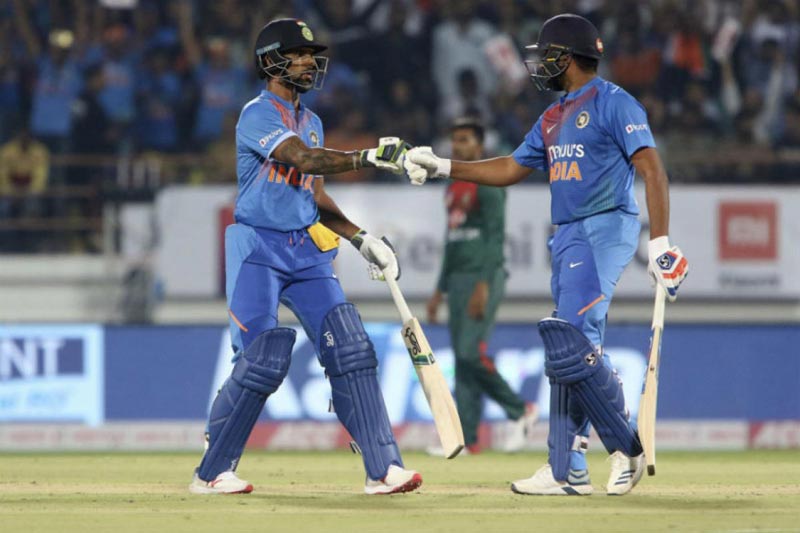 MUMBAI: That is the big dilemma for India as they prepare for the first of three ODIs against Australia in Mumbai on Tuesday (January 14). It will show a sneak-peek into India’s strategy for the crucial opening spot. There isn’t a context of a World Cup in the vicinity, which gives India some time to ponder over their combinations. The Australia series will be the first one where almost all their man players are available, which makes the three games even more interesting for all. Australia are a tough opponent too –– they beat India 2-1 in ODIs here last year. They have arrived with an even stronger team, with Steve Smith and David Warner, who were absent last tour, returning. And given the three matches are played in batting friendly conditions at Mumbai, Rajkot and Bangalore, this could be a high scoring entertaining series.

This is the stern test that India, and Australia, want as they build towards the next ODI cycle. Apart from the opening combination, India have a sorted line up, and it’s only a matter of picking players according to conditions. Rishabh Pant had a fairly decent series against West Indies, which should have reduced some noise around his place in the side. Now, it’s an opportunity for him to enhance his reputation against a stronger opposition. It’s a similar opportunity for Shreyas Iyer too; he has fixed himself as the No. 4 in the ODI side post World Cup 2019, and will be eager to make this chance count.

But will he get to bat at No. 4, if India play Rohit, Rahul and Dhawan? Kohli said it was ‘absolutely possible’ that he could move down the order to accommodate all three openers, which could mean Iyer might float down the order. India’s bowling would welcome back Jasprit Bumrah. The bowlers struggled against the power-packed West Indies side, who kept attacking. Australia might take a different approach, but the result might be as effective. India will look up to Bumrah to change that, especially given they don’t have the injured Deepak Chahar for this series.

Australia will come with confidence given they beat India last year, that too after losing their first two matches of the tour. India beat Australia in the World Cup match, which should make them feel better too. Australia have dropped Usman Khawaja, their leading run-scorer from the series in India last year. Instead, they’ve got Marnus Labuschagne, who has been in stellar form in Test cricket. Captain Aaron Finch, Warner, Smith and Labuschagne will form the core of the batting, which also has an upcoming finisher in Alex Carey. The bowling is strong too, with Pat Cummins and Mitchell Starc in the line up that also has spinner Adam Zampa. Cummins was the leading wicket taker last tour, and will be the biggest threat once again.

Not too long ago, India played a T20I international in Mumbai, where they thrashed West Indies after posting 240 batting first. Given the strength of both sides and the nature of the wicket, another cracking game could be in store.