Fake scholars must be arrested; they are the ones who spread wrong messages in society

In today’s dynamic world, everyone is occupied in their own matters, whether it’s their family life or career. Basically, we all are in a consistent race to achieve our goals and to fulfil our desires. In our daily lives, we often face different problems that are either related to ourselves or the environment around us, but sometimes we fail to figure out a satisfactory solution and the problems become quite intense.

Black magic is one of those bad problems that affect our society.When someone possesses the ability to communicate with demons and supernatural beings, and through these hidden things, they try to hurt other human beings by destroying their lives or punishing them for anything that they dislike or that is opposed to theirviews, it comes under black magic. It is basically done by those who have the power to influence negative souls for deadly purposes.

It is not a new phenomenon but now people are becoming more aware of it.Whether in a positive or a negative sense, that is another debate. We live in the 21stcentury; people have reached other planets,but we still possess some dogmatic views.Itis just a myth of old times, and it lacks authenticity. It’s a demented, man-made thing that lacks reality. People with little knowledge are mainly the believers.We can say that all these arguments are valid but we cannot deny the existence of black magic. 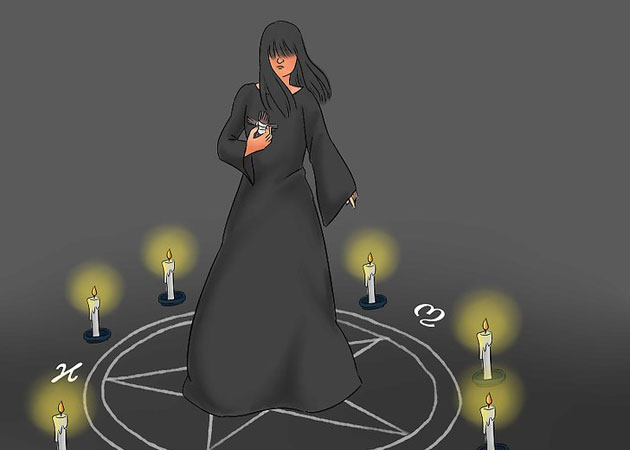 If we talk about religion, particularly Islam, we have the proof that black magic actually exists, as some incidents took place in the initial Islamic era.Even the last prophet of Allah,Mohammad (pbuh) was made a target of black magic. He was the most pious one and close to Allah, but he was still affected by it. So howcanordinary people like us claim that there is no authenticity in it?Even the holy book of Muslims,the Quran, has mentioned it in somesurahs.

Today, we are living in a modernised world where technology has empowered people and we are equipped with latest trends, information and infrastructure, but even now there are some dramas and movies that have been made on this ‘not-so-popular’ topic. Obviously, thatshows that this problem exists in our society and people want to highlight it for the sake of awareness. Media shows things that the audience wants to watch; the shortcomings of our society are mostly specified through media.

We can see that it has become a proper business, a way of earning money by making a fool of people fool. They say that they arehealers and exorcists and can help people to live a normal life, but actually, these people further increase the problems

Now the question arises whysome people opt for black magic. There are various reasons. The biggest reasonfor opting for black magic is jealousy.Some people became jealous of others’ happiness, luxurious lifestyles and successful careers,and they want to demolish someone’s life because they are deprived of all those things.They have their own grievances and are unable to achieve what they want; that is whythose wicked people go for black magic.

Another reason is to take revenge.For instance, if someone ever did anything wrong to you and you kept that in your mind.You developed a grudge against that person and did not forgive him or her.You wished to harm that person by a negative influenceto ruin his or her life.

There are many other factors. In a joint family, there might be some clashes between people’s opinions,and so just on that minor issue, some people damage someone’s life by doing black magic. If someone got admission in a medical college and you could not pass the test,you may want that he or she should be unable to continue his or her studies or die. If someone finds a good partner and you couldn’t manage to have a prosperous life, the only option to assuage your anger and jealousy is to make their happily married life a hell by sending some evil demons in their life. Sometimes, an evil thing might enter the body of your target, possess them and physically harm them and their loved ones.

There have been many cases when people suffered because of black magic. They started seeing supernatural things that used to frighten them and harm them mentally as well as physically.They would observe unusual, horrifying changes in their house, see blood stains on their clothes or on their belongings without any reason or without finding any dead animal or bird inside their house.

Individuals who are usually involved in the inhumane act of black magic are mostly those who have very little knowledge of religionand the punishmentsfor those involved in such activities. Due to their poor connectivity with religion and their weak faith, they are often involved with bad people who do black magic. Those magiciansmake them believe that all their difficulties would end, they would become powerful and would be able to do whatever they want to. These sorts of peoplehave some negative and wrong beliefs and they also read some bad things to control evil souls who act upon their orders by teasing and harming people.

Another thing that has become very popular nowadays is that there are many people who claim to be exorcists and want to help those who are under an evil or a negative influence. Though some of these people are or might be true healers, but most of them are simply greedy, and they just want to take money from the people who are suffering from negativities. Such people just pretend to be healers but in reality, they just want to make money, even by playing with the sentiments of people. We can see that it has become a proper business, a way of earning money by making a fool of people fool. They say that they arehealers and exorcists and can help people to live a normal life, but actually, these people further increase the problems.

Even on roads, youcome across people who distribute cards; they even throw cards in cars. These cards are advertisements of magicians or those who just pretend to be healers.They assure people that they would resolve their issues, but all they do is play with their vulnerabilities. Such fake people should be arrested.And as this problem is increasing day by day, people should be given awareness regarding this sinful activity and be directed towards the right path. They must be told about the dangers associated with it, and how by having strong faith in Allah they can be secure.

These awareness lessons must be given by certified religious clergy. Fake scholars must be arrested; they are the ones who spread wrong messages insociety. We see that programmes like Sar-e-Aam that a team raidsplaces where fake healers are running their businesses and have them arrested. Government and NGOs must play their effective role in spreading awareness among people and make our society free from fake and fraud healers.

We know that black magic prevails in our society, but we can bring people on the right path by correcting their beliefs and by assuring equality in the society so that no one feels left out and is compelled to be involved in bad activities to take revenge for their grievances and deprivations.