* Born into a middle-class Muslim family in the predominantly Sikh city of Ludhiana in 1912, in his early life Sadat Hassan Manto was not all serious about his studies 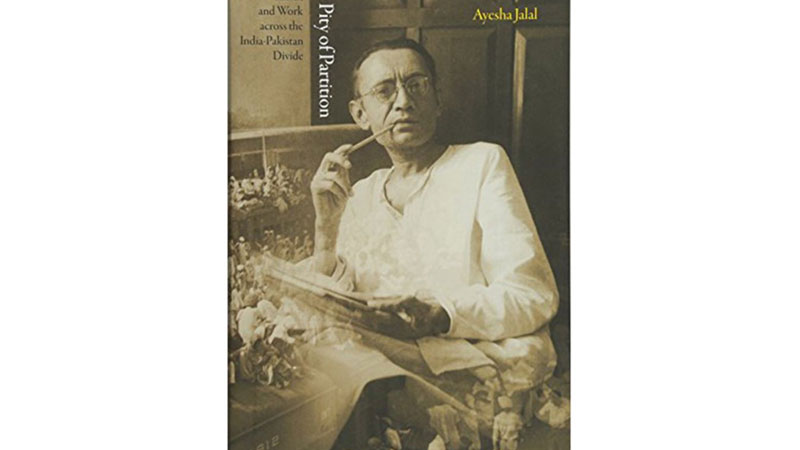 The Pity of Partition is a life history of great Urdu short story writer Sadat Hasan Manto authored by the most prolific and acknowledged historian of South Asia, Ayesha Jalal.

The book is based on the Lawrence Stone Lectures that Jalal gave at the Davis Center at Princeton University in April 2011. Ayesha Jalal is the author of a number of seminal works on South Asian history and the recipient of the 1998 MacAruthur Foundation Fellowship. Ayesha is also the grand-niece of Sadat Hassan Manto.

Born into a middle-class Muslim family in the predominantly Sikh city of Ludhiana in 1912, in his early life Sadat Hassan Manto was not all serious about his studies. He failed in Urdu quite a few times which later on became the medium of his craft. In his early life Manto translated Russian, French and English short stories into Urdu and through studying the work of western writers he learned the art of short story writing.

Both acclaimed and criticised not only now but also during his life time, recently Manto has been increasingly read, quoted and admired. His fan following can be gauged from the fact that when I was reviewing this book in National Library of Pakistan in Islamabad more than a dozen readers upon observing cover picture of the book approached me and clicked pictures of the book. Of late there has been a lot of work on this literary giant. In late 2018 a biographical film on Manto’s life named ‘Manto’ directed by Nandita Das and stared by great Bollywood-actor Nawazudin Sidiqui was brought into lime light.

Among Manto’s literary corpus include his classic short stories: Thanda Gosht( colder than ice), Toba Tek Singh and Khol Do( open it) etc. He also has to his credit film scripts, screen plays and his most prophetic essays entitled “Letters to Uncle Sam”. Manto has been likened to Guy De Maupassant the great French short story writer because like him Manto had sought to dig up societal ills without losing faith in inherent beauty within human beings. Manto had gone through innumerable ups and downs in his life ranging from sheer destitute, familial clashes and animosity among his circle of friends. He was charged with obscenity allegations in both colonial as well as post-colonial states under the same law. Distraught with grief once Manto quipped that he was a “Kabab full of ants.” Some chided him others loved him but it did not prick to his airs. He had himself once said “progressive call me a conservative while conservatives call me a progressive.”

Manto had been much aware of his literary talent and place in history; he had wryly commented in one of his witty autobiographical pieces that it was quite possible that Sadaat Hasan died and Manto lived on but that would be like an eggshell minus the white and the yolk.

Manto ,an all time non-conformist, did not subscribe to partition rhetoric. He thought far from eradicating the miseries of ordinary people, partition of subcontinent had the tendency to increase them.

Most of Manto’s stories are the reproductions of his real life encounters. His perceptive insights into human condition is matchless. The book begins with story ‘Sahai’, a reproduction of one of his encounters with his friend shyam Chadda, in which the character Jugal hit by his uncle’s murder by Muslim gangs in Lahore had told his friend Mumtaz that he would kill him if violence broke out in their neighbourhood. After eight days of stoic silence Mumtaz announced that he was setting sail for Karachi. When Jugal apologised Mumtaz told him philosophically “you would have been sorrier if you had killed me.

In another classic story “Thanda Gosht” Manto has portrayed the bestiality that partition violence had invoked in human beings but while concluding the story he reminds readers of the humanity that is immortal to human character.

Manto had far earlier foreshown the aftermath of political developments in shape of his story “Naya Qanun”. In which the character Ustad Mangu, a tonga driver on 1 April, 1935 gets into an altercation with one of British soldiers whom they disparagingly called ‘tommies’ thinking that the new constitution had changed their citizenship rights. But much to his chagrin, the tonga driver discovers that nothing had changed even to the least bit.

Manto heeding to his mother’s advice invariably used 786 the substitute of “Bismillah al Rehman al Rahim” at the beginning of his write-ups. Manto never liked to be pitied even in his worst days.

In his classic “Toba Tek Singh” in which a mental patient ends up giving his life in “no man’s land” also internationally known for his partition stories, drawing on his experience in mental asylum of Lahore where he was treated for this alcoholism, Manto portrays inmates of the the asylum of sounder mind than those making the decision for their relocation to India on religious basis. Manto “deftly questions the partition and the sheer madness that it had let lose.”

Both acclaimed and criticised not only now but also during his life time, recently Manto has been increasingly read, quoted and admired. His fan following can be gauged from the fact that when I was reviewing this book in National Library of Pakistan in Islamabad, more than a dozen readers upon observing cover picture of the book approached me and clicked pictures of the book

“We are free. Hindustan is free. Pakistan is free, and we are walking the desolate streets naked without any possession in utter distress” Manto had lamented.

At one moment Manto had contemplated a film script called “Parosi” (neighbour) on the question of Hindu-Muslim unity, he had intended to foreground the home of a prostitute as the common place of meeting point of the two communities.

His story “Yazid” evocatively translated as “When Waters Will Flow Again” providing most thought-provoking insight into the real nature of Indo-Pakistan enmity, the protagonist Karimdad’s father and wife’s brother had been killed. When war is imminent between both countries the news spreads that India is about to divert the river to starve the village. Karimdad utters that how an enemy country could be expected to do good. Given the opportunity, Pakistan too would have done the same. On returning home, Karimdad discovers that his wife had given birth to a son. He names the son Yazid to the utter distrust of his wife and mid-wife. When asked, Karmdad responds that his son will not necessarily be the same Yazid. “That Yazid shut the river water this one will let the water follow again.”

An acute observer of the present, Manto had an uncanny ability to foresee the future. His most celebrated essays “letters to uncle Sam” were distressingly prophetic on the direction that Pakistan was to take. Manto had questioned the ethics of possessing weapons of mass destruction when the lives of millions were precarious owing to lack of access to food, potable water and others basic amenities of the life. Manto had written nine “Letters to uncle Sam” of which one went missing. Manto wrote in one of essays, “You know why my country was carved out of India and how it gained independence. Just as my country was divided to get independence, I too became independent by being split up. Uncle an all-knowing sage like you would understand what kind of freedom a bird with clipped wings can enjoy.”

Manto’s socialist-cum-revolutionary views were for many a bullet to bite.

On 18 August 1954, Manto had written his own epitaph. Commencing with 786 the epitaph reads, “Here lies Sadat Hasan Manto. With him lie buried all the arts and mysteries of short story writing…Under tons of earth he lies, wondering who of the two is a greater short story writer: God or Manto.” But this epitaph never appeared on Manto’s tomb stone in Miani Sahib cemetery in Lahore out of sheer fear of his family. Instead an other epitaph coined by Manto himself was put on display.

While stating her objectives, the author states that the book is an attempt to craft a new method to dig up micro-history of an individual to embellish macro-history of states. The books largely meets its objectives.

To conclude, Manto had prudently stated in his story Sahai:

“Those who think religion can be hunted down with guns are stupid. Religion, faith, devotion are matters of the spirit, not of body. Knives, daggers and bullets cannot destroy religion.”

The writer is a bibliophile and can be reached at salalameen@gmail.com