Appointments in EC will be made through consensus with opposition, says Khattak 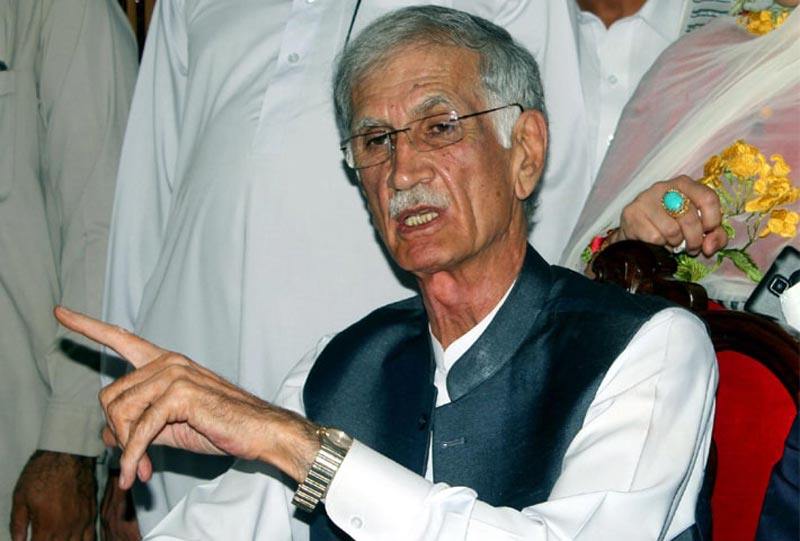 Federal Minister for Defence Pervaiz Khan Khattak has said that the government is trying its level best to appoint Chief Election Commissioner and other members with the consensus by taking the Opposition on board in order to ensure transparency.

Talking to a big public meeting regarding joining of political leadership of other parties to Pakistan Tehreek-e-Insaf, Pervaiz Khattak made it clear that the government did not want to give or discuss the power of the Parliament into courts and want to make legislation through a viable dialogue and consensus with the Opposition’s leadership.

He said that regarding appointment of Election Commissioner the government and Opposition have three different meetings and ready to have the forth meeting in this regard. He said that the government and Prime Minister Imran Khan would complete its five year tenure and there is no sign of in-House change as it was just a rumour spread by Maulana Fazlur Rehman.

“We don’t know about Maulana’s predictions about in-House change rather, it is impossible that anyone come and dislodge the elected and representative government of Pakistan Tehreek-e-Insaf”, he said.

He dispelled all such rumours regarding in-house change and said that one should see cracks in ranks of the Opposition. ‘Soon the people will see many members from the Opposition who would express their confidence in PTI policies, adding that the government has taken every step regarding their voice on Kashmir and against the brutality made by the Indian forces in Occupied Kashmir.

He said that actually Maulana’s dharna damaged the Kashmir cause. He said so far there is no consensus being made on the names of Chief Election Commissioner and its member and we will still in tasks with the Opposition’s leadership to bring good and qualified people to the Election Commission.

Khattak said the brutality of Indian forces against innocent Kashmiris continue and Pakistan has taken and highlighting such brutalities of the Indian forces at all forums across the world.

He said that government has taken very hard decisions to save Pakistan from bankruptcy and that is why the inflation rate has been increased but now Pakistan is heading toward better economic growth.

He said the government is trying to stabilize economy through systematic policies as a result of which the rates of rupee against dollar will be increased. The government has trying its level best to increase export so that to stabilize its economy, he added.

He said that the Lahore incident is actually provincial matter and its dose not link with the federal government now it up to the government of Punjab to take action against those responsible for such incident.

Pervaiz Khattak said that the government’s top priority is to facilitate needy and poor people by bringing down the inflation and ensure imposition of edible commodities on government rates. He said Prime Minister Imran Khan is in constantly in touch with Chief Minister Punjab and soon action would be taken against those responsible for Lahore incident as a result of which innocent people lost their precious lives.

Earlier, former local leadership of Awami National Party and Pakistan People’s Party announced joining of Pakistan Tehreek-e-Insaf. Pervaiz Khattak on this occasion honoured all those with PTI caps and urged upon them to work side by side to address the problems of the people on priority basis.