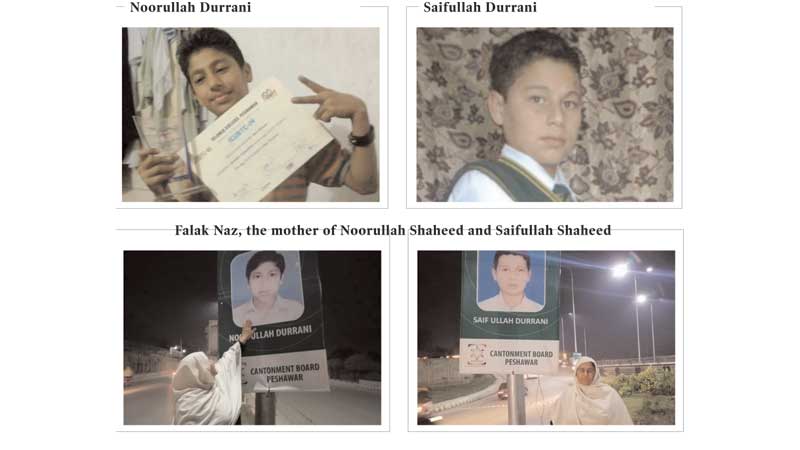 Falak Naz has run short of words to reply to comments on the Facebook posts regarding her sons who lost their lives in the 2014 attack on Army Public School in the provincial capital Peshawar.

Falak Naz had three daughters and two sons, but now she does not have any son, as both of them were martyred in the attack.

Naz, a charge nurse at the Fauji Foundation Hospital, says that soon after knowing about the attack, she assumed that the army school was a secured location or expected the terrorists would just take hostage the students and then set them free after getting their demands met. However, when the media ran news of firing and shooting at the school, she ran towards the CMH in Peshawar.

“I nervously saw all the injured students, but didn’t see my sons. But finally I saw a mobile phone in the hands of a soldier; I snatched it from his hands but there I came to know that my son had died, while I also came to know later that the other son had also been martyred,” she said in a choked voice, as tears rolled down her cheeks.

She added that on the 16th of each month, the parents hold Quran Khwani at the school in memory of the young martyrs.

“There is not a single day that passes without sobs, since I am having the mobile phone with Facebook account of my younger son Saifullah Durrani and my husband is having the phone of our elder son Noorullah Durrani, with his Facebook ID too; each day we see their Facebook posts and cry,” she said.

“I feel I am living a second life,” says the 25-year-old, adding that the anniversary of the gory incident haunts him each year.

Recalling the terrorist attack, he said: “It was a normal day; we sat on chairs in the exam hall to attempt a paper. I was much delighted to see that the paper was easy that day, as I had prepared well for the exam; but about 10 minutes after we started our paper, the firing started outside the hall.”

He said that they thought the firing might be part of the soldiers’ training. “Later, some of our students left the hall and were immediately shot dead outside,” he said. The teachers then told the students to lock the hall from inside.

Martyred teacher’s father says the monuments they have set up are also too weak to be called monuments in true sense, while there has been no judicial inquiry into the incident

He said that after a few moments of the gunshots, the terrorists – attired in security forces’ uniforms – entered the hall. “We initially thought they were soldiers coming there for our protection, but in the meanwhile they opened firing, killing all in the hall, except two students who survived,” he added.

Sadia Gul Khattak, a teacher, was shot and martyred as soon as she came in front of her students and asked the gunmen not to kill them.

Sadia’s father Gul Shehzad Khatttak told this correspondent that Sadia did her masters in English literature from the University of Peshawar and joined teaching.

“I have retired from Peshawar Public School and College myself. I also asked Sadia to join the same school, but she said she was joining Army Public School, being a secure institution and also because she said she liked an ‘environment of discipline’. But she was unaware of how her decision was going to seal her fate,” recalls Gul, aged about 63 years. He said Sadia had served at the school for about five months before the attack took place.

Recalling the incident on that fateful day, Gul said that he along with his sons and a nephew rushed to CMH and Lady Reading Hospital in the city several times after hearing that victims were being brought there. And finally, he said, his nephew came to know about presence of the body of Sadia at CMH.

Gul adds that none of the promises made with the families of the martyrs by the authorities concerned were fulfilled. “They didn’t announce the highest civil gallantry award Nishan-e-Pakistan for the martyrs. The monuments they have set up are also too weak to be called monuments in true sense, while there has been no judicial inquiry into the incident, which we have been demanding so far,” he added.

Since the 2014 massacre, the parents have been demanding a judicial inquiry into the incident and punishment for those who failed to provide security to the school on that fateful day.

There are two unions set up by parents of the martyred students; one is headed by Ajoon Khan advocate and the other being led by Fazal Khan advocate.

Ajoon Khan advocate, who lost his son Asfand Khan to the 2014 terrorist attack, said that their major demand is to fix the responsibility and bring to justice those responsible for the negligence in securing the school.

“Also, the government should have announced the highest civil award Nishan-e-Pakistan for the martyrs,” he said.

He claimed that he has been in contact with the judicial officers and that the judicial commission announced by the Supreme Court last year was likely to submit its inquiry report at the end this month (December). He also said that the army school was providing free education to one child from each of the families of martyrs since the tragedy.

“Our main ceremony for the anniversary is scheduled to be held at Army Public School in morning on December 16. However, we, the parents, will also hold a Chehlum separately afterwards,” he added.

Shahana Ajoon, mother of Asfand, also described the memories of the fateful day. “Asfand, whom we used to call Sonu, was not willing to go to school on the day of the attack but I forced him to go, as he was soon to be relived from the school for exam preparation.” She said that she now repents why she asked his son to go to school on that day. 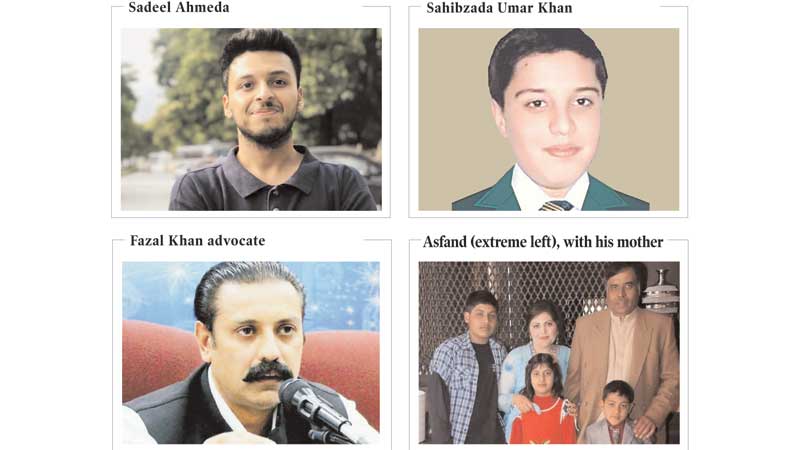 “We want punishment for the negligence of the authorities concerned. I think all the security personnel manning all the check-posts near the Army Public School should be punished. How was such a huge ammunition and weapons taken to the school and through which route?” Shahana questioned.

Fazal Khan advocate, who lost his son Umar Khan in the 2014 tragedy, told Daily Times that they were still waiting for a judicial inquiry into the incident.

“The then IGP and secretary home in 2014 had admitted negligence and security lapse, since there was already a threat alert about the attack on the school,” he added.

He said that in 2018, a judicial commission was announced for probing the incident but despite giving dates after dates, the judicial inquiry could not be conducted so far.

“So far, not a single chowkidar (watchman) has been suspended in this serious case. It is a school run by a powerful institution of the country. We want the culprits behind bars, whether the terrorists or those responsible for the security lapse,” he added.

Following the army school attack, the government and military authorities in Pakistan launched a National Action Plan in January 2015 to bust terrorist networks in the country’s north-western region. The authorities concerned now claim to have largely eliminated terrorist hideouts on Pakistan’s soil through military operations. However, it remains a challenge for Pakistan to prevent terrorist attacks because of the 2,430km porous border with the strife-torn Afghanistan.