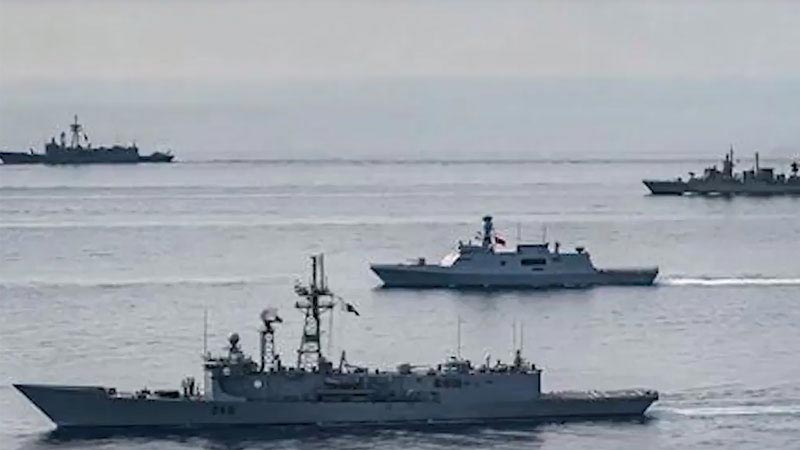 Pakistan Navy (PN) has emerged as a responsible regional navy by fulfilling its regional and international commitments and responsibilities. In the wake of new challenges and multi-dimensional threats to the global maritime environment PN is busy in bilateral and multilateral engagements with various countries around the globe. The collective challenges to international environment demands combine front against these problems. In this context, two ships of Pakistan Navy, PNS ASLAT and PNS MOAWIN are currently on deployment of African countries. PNS ASLAT is fourth F-22P ship of Sword Class frigates of Pakistan Navy. It is a versatile platform fitted with state of the art weapons and sensors and forms mainstay of PN surface combatants along with her consorts. PNS MOAWIN is the recently inducted Fleet Tanker cum Hospital ship of the Pakistan Navy. It is primarily a logistic support ship of PN which is retrofitted with state of the art medical facilities.

During their recent employments PNS ASLAT and PNS MOAWIN had just visited Morocco and Mauritania and are by and by in Takoradi port of Ghana so as to reinforce existing bilateral relations, further advance maritime discretion and increment their brotherly ties alongside the interoperability of their respective naval forces. The current employment of the deployed Naval Ships in Africa portrays dynamic maritime strategy and responsibility of Pakistan towards territorial harmony. In the recent years Pakistan Navy has taken various steps like AMAN exercise, where 46 navies participated in joint naval exercise to display greater resolve in promoting diplomacy at sea and Regional Maritime Security Patrols (RMSP), an independent initiative of undertaking Maritime Security Operations for protection of national and international shipping in the Indian Ocean Region, to contribute in regional peace initiatives, thus projecting Pakistan as a responsible and constructive naval power. Besides naval capacity building initiatives like AMAN exercise and developing mechanisms of cooperation for collective security like RMSP Pakistan Navy is pursuing various humanitarian operations. The current deployment is essentially a humanitarian assistance to the underdeveloped nations of Africa.

During the visit to Mauritania, Pakistan Naval ships set up medical camp at Nouakchott Marines base port where more than 1000 patients were treated including 945 General OPD whereas, 42 were detained, 12 went through minor surgical procedure and 26 were given dental treatment. In recent visit to Ghana, Pakistan Navy has established medical camp where medical facilities including routine checkups, minor surgical and dental treatment were carried out by Pakistan Navy’s medical staff. Moreover, Pakistan Navy officers and sailors onboard interacted with officials of Ghana and diplomats of various countries deciphering strong brotherly feelings with the counterparts. Ghana is an active member of United Nations and many of its specialised agencies, the World Trade Organization, International Criminal Court, the Non-Aligned Movement, the Organisation of African Unity (OAU), the African Union (AU) and the Economic Community of West African States. Keeping in view the importance of Ghana in international organizations, mission commander drew attention of the Ghana’s authorities, worthy delegates, dignitaries and diplomatic officials towards the atrocities being done in Indian Occupied Jammu and Kashmir by Indian Army. The threat to the regional peace as a result of Indian unilateral offensive actions was also promulgated during deployments through naval diplomacy keeping in view the fact that Africa is the most significant region in the world, as it forms more than 25 percent of UN membership.

The Republic of Ghana is often an exception to common stereotypes about African States, and is held up as a success of decolonization and successful governance Ghana was the first African nation to declare independence from the United Kingdom and has since ranked as the 7th-best governed state in the world. Moreover, Ghana’s economy is currently the 6th-largest in Africa according to both nominal GDP and purchasing power parity is one of the fastest growing economies in the world. Ghana is also one of only five Africa states with a free press that enjoys strong constitutional protections and widespread public support. The increasing naval cooperation with Ghana will help in future to develop a framework of cooperation to explore the opportunities in the domain of manufacturing and exportation of digital technology goods, automotive and ship construction and exportation of diverse and rich resources such as hydrocarbons, industrial minerals and defence industry. However, it is pertinent to mention here that neither Pakistan nor Ghana has their embassies in the other’s country. Therefore, this Naval Diplomacy move will help to break the ground for further cooperation and collaboration. Now it is prerogative of MOFA to further utilize the gains of the deployment through establishing diplomatic ties.

The writer can be reached at hadimir310@gmail.com