The dangers of overpopulation

In biology, population growth is the increase in the number of individuals in a population. The population of every country is a very important asset. However, as they say, too much of a thing is harmful, and similarly, if a country is prone to over-population, a great deal of problems result from that. Pakistan is in a similar predicament. With the exponential explosion in population in the recent years, the world is suffering a great deal. 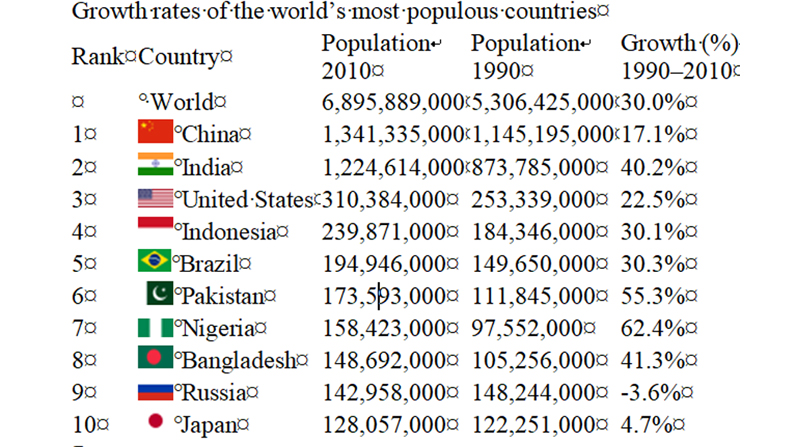 No matter how politicians spin the advantages of having more people around, the scarce resources of the world simply cannot handle any more bursts in population. People tend to cluster in urban areas of a country, leading to cities to become overburdened and overcrowded. No matter how hard a local government tries to cope with the influx of people in cities, a developing nation simply doesn’t have that kind of money and resources to provide the required infrastructure and services. The influx of people to cities causes gargantuan problems.

(2) A second period beginning with the rise of agriculture, it was the period of first major increase in human population

(4) The present situation where the rate of population growth has slowed down in wealthy, industrialised nations but the population continues to rapidly increase in poorer and less developed nations

The major questions today are: Is our planet able to provide a healthy and prosperous lifestyle, and can it be that for twice as many people in the future? If not, what measures can be taken to prevent such a population growth? If the United States take precautions, would those measures be fair and not interfere with natural human rights? A growing population would have a serious impact on the needs of low-income families. Food distribution, financing and shortages would double the problems. Earth is over populated, and what measures, if any, should be taken to slow the population growth rate.

Population growth and its consequences are highly complex and controversial issues. Increasing population or overpopulation in the world has considerably affected the lives of people by degrading the standard of living and threatening the environment. Overpopulation is responsible for the deterioration of the quality of human life in all parts of the world. It has been responsible for the intolerable gap in living standards between the rich and the poor. The rich are getting richer, and the poor are getting poorer. Poverty is rampant.

Increasing population is a central issue in every country’s list of problems. According to United Nations population statistics, the world population grew by 30 percent, or 1.6 billion humans, between 1990 and 2010. The increase was highest in India (350 million) and China (196 million). Population growth was among the highest in the United Arab Emirates (315 percent) and Qatar (271 percent).

In a developing country like Pakistan, having a job can mean the difference between life and death. Pakistan has no such provisions as Medicare or a dedicated unemployment benefit service, so overpopulation exacerbates problems.

At the root of overpopulation is the difference between the overall birth rate and death rate in populations. If the number of children born each year equals the number of adults that die, then the population will stabilise. While there are many factors that can increase the death rate for short periods of time, the ones that increase the birth rate do so over a long period of time. The discovery of agriculture was one factor that provided the ability to sustain nutrition without hunting. That created the first imbalance between birth and death rates.

Then came the Industrial Revolution. Technological advancement is perhaps the biggest reason why the balance has been permanently disturbed. Science was able to produce better means of producing food, which allowed families to feed more mouths. Medical science made many discoveries, thanks to which they were able to defeat a whole range of diseases. Illnesses that had claimed thousands of lives were cured because of the invention of vaccines. Combining the increase in food supply with fewer means of mortality tipped the balance and became the starting point of overpopulation.

When talking about overpopulation we should understand that there is a psychological component as well. For thousands of years, a very small part of the population had enough money to live in comfort. The rest faced poverty and gave birth to large families to make up for the high infant mortality rate. Families that have been through poverty, natural disasters or are simply in need of more hands to work are a major factor for overpopulation. As compared to earlier times, most of these extra children survive and consume resources that are not sufficient in nature.

With latest technological advancements and more discoveries in medical science, it has become possible for couplesthat are unable to conceive to undergo fertility treatment methods. Today, there are effective medicines that can increase the chance of conception and lead to rise in birth rate. Due to modern techniques pregnancies today are safer.

Many people prefer to move to developed countries like the US, UK, Canada and Australia, where the best facilities are available in terms of medicine, education, security and employment. Due to that, those places become overcrowded. The difference between the number of people who are leaving the country and the number of people who enter narrows down, leading to more demand for food, clothes, energy and homes. This gives rise to shortage of resources. Though the overall population remains the same, it affects the density of population making that place simply overcrowded.

Most developing nations have a large number of people who are illiterate, live below the poverty line and have little or no knowledge about family planning. Getting their children married at an early age increase the chances of producing more children. There is an inability to understand the harmful effects of overpopulation; ignorance prompts many people to avoid family planning measures.

The population problem has no technical solution; it requires a fundamental extension in morality.

The population of our planet will quickly reach a point where there are not adequate resources to support life. Population control must be enforced to avoid such a catastrophic occurrence. Many economic, social and environmental problems are either affiliated with or are increased due to overpopulation. With an exponentially increasing world population, problems grow correspondingly. In order to stabilise the massive population growth, the world must work together to maintain population stability.

Guarantee education, especially for girls. In every culture surveyed to date, women who have completed at least secondary school have fewer children on average, and have children later in life than women who have less education.

Eradicate gender bias from law, economic opportunity, health and culture. Women who can own, inherit, and manage property, divorce, obtain credit, and participate in civic and political affairs on equal terms with men are more likely to postpone childbearing, and to have fewer children compared to women who are deprived of these rights.

Integrate lessons on population, environment, and development into school curricula at multiple levels. Refraining from advocacy or propaganda, schools should educate students to make well-informed choices about the impact of their behaviour, including childbearing, on the environment.

Put prices on environmental costs and impacts. In quantifying the cost of an additional family member by calculating taxes and increased food costs, couples may decide that the cost of having an additional child is too high compared to the benefits of a smaller family that might receive government rebates and have a lower cost of living. Such decisions, freely made by women and couples, can decrease birth rates without any involvement by non-parents in reproduction.

Adjust to an aging population instead of boosting childbearing through government incentives and programmes. Population aging must be met with the required societal adjustments, such as increased labour participation, rather than by offering incentives to women to have more children.

Convince leaders to commit to stabilising population growth through the exercise of human rights and human development. By educating themselves on rights-based population policies, policymakers can ethically and effectively address population-related challenges by empowering women to make their reproductive choices.

Overpopulation is a big evil for developing nations across the world, and it causes a lot of problems, both existential and financial. Countries all over the world should dedicate a large amount of money toward promoting family planning and use of contraceptives to escape the growing problem of overpopulation. Education and awareness are the only ways this problem can be solved; otherwise, developing nations will remain enmeshed in this predicament.

The writer is an assistant professor in English at Mehran University of Engineering and Technology, Jamshoro