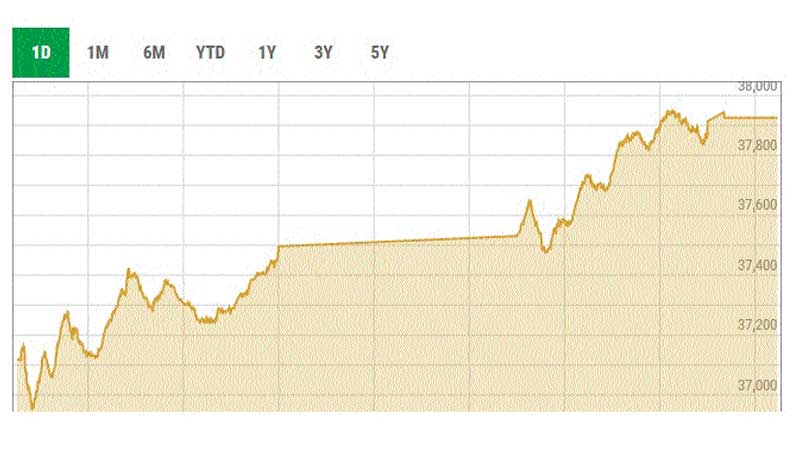 The KSE 100 exchange recovered the losses incurred in the previous session, as it gained around 812 points on the last trading session of the week and closed at 37,944-level.

The sentiments in the market were driven by the expectation that the State Bank of Pakistan, along with keeping the policy rate unchanged will reduce the statutory liquidity ratio.

Irfan Saeed, Senior Vice President at BMA Capital said the index bounced back due to heavy buying from the companies worth $6.8 million, Mutual funds worth $1.9million along with brokers propriety around $1.4 million. He said market sentiments were upbeat amid high expectations of interest rate cut, but as he claimed earlier, it was a farfetched prospect since inflation rate increased consistently. He said since interest rates remained unchanged at 13.25%, market is expected to bear its impact next week. He added, however, any dip in the market, will be an investment opportunity amid exorbitant inflow of funds through Special Convertible Rupee Accounts (SCRA) which is being directed to the stock market.

The most points taken off the index was by Shifa International Hospitals Limited which stripped the index of 3 points followed by Saif Power Limited with 3 points, Philip Morris Limited with 1 point.

Meanwhile, the State Bank of Pakistan (SBP) has decided to maintain the policy rate at 13.25pc for the next two months. In a statement issued on Friday, the SBP’s Monetary Policy Committee stated the monetary policy stance was appropriate in order to control inflation, which had remained high in the first four months (Jul-Oct) of the current fiscal year (FY20).Inflation was recorded at 11.04pc in October 2019 compared to 11.4pc in September. The SBP has also projected average inflation for FY20 to remain broadly unchanged at 11-12pc.

ASIAN STOCK MARKETS In Asia stock markets were mixed following days of decline this week amid confusion over trade deal between U-S and China. Investors’ sentiments dampen amid fresh row between Washington and Beijing over U.S. legislation on Hong Kong threatening to undermine their trade talks and delay a “phase one” deal that investors had initially hoped to be signed by now. The legislation, which has angered Beijing, has been sent to the White House for President Donald Trump’s approval. “China will surely take this as an interference into its domestic affairs and is likely to think it will no longer need to make concessions on trade,” said Norihiro Fujito, chief investment strategist at Mitsubishi UFJ Morgan Stanley Securities.

The Shanghai Composite shed over three quarters of a per cent to close 0.63% lower. Tokyo’s Nikkei 2-2-5 traded quarter of a per cent higher and closed 0.32% higher though gaming firm Nintendo shares fell over three per cent after Morgan Stanley downgraded its stock.Despite ongoing political unrest in Hong Kong, Hang Seng gained 0.48% and Seoul’s Kospi closed 0.26% higher.

Meanwhile, Brent crude price retreated amid reports that OPEC and its allies are likely to extend existing output cuts until mid-twenty-twenty. Oil prices pulled back from their highest levels in nearly two months on Friday amid lingering doubts on whether the United States and China will be able to reach a partial trade deal that would lift some pressure on the global economy.

That was more than enough to offset news of a likely extension of production cuts by major producers that drove prices higher in the previous session.