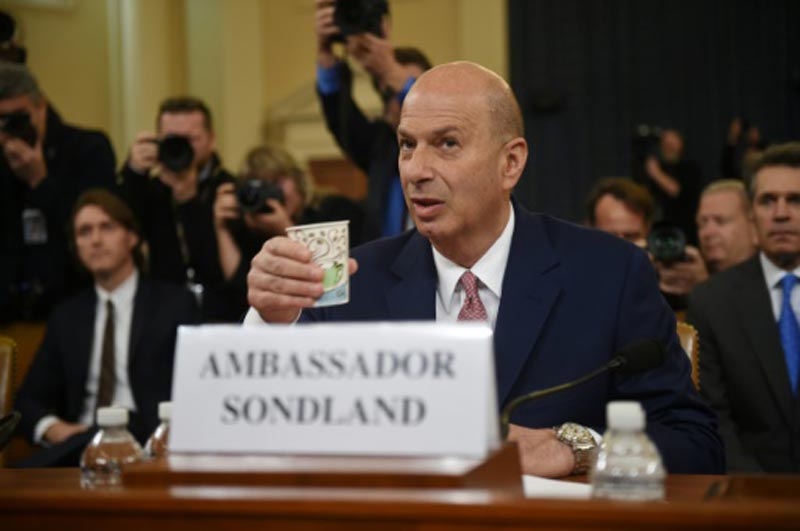 A US envoy said Wednesday that Secretary of State Mike Pompeo directed him to coordinate Ukraine policy with President Donald Trump’s lawyer, further implicating the top US diplomat in the impeachment drama.

Gordon Sondland — the US ambassador to the European Union who, unlike previous diplomats who testified in the inquiry, is a political appointee allied with Trump — said he kept Pompeo up-to-date on what he said was the president’s effort to set conditions to a White House meeting with Ukraine’s new leader.

Asked if Pompeo had been made aware that Trump wanted a Ukrainian investigation of domestic rival Joe Biden before agreeing to the White House meeting and releasing security aid, Sondland replied: “Yes.”

Representative Adam Schiff probed further, asking if Pompeo denied a connection. “Not that I can recall,” Sondland replied.

Sondland said Pompeo had directed the US pointman on Ukraine, Kurt Volker, to speak with Trump’s personal lawyer Rudy Giuliani, the former New York mayor who was pushing Ukraine to investigate Biden.

He said Pompeo’s stance did not change even after diplomats complained that Giuliani was meeting with an allegedly corrupt Ukrainian prosecutor without their knowledge.

“Even as late as September 24, Secretary Pompeo was directing Kurt Volker to speak with Rudy Giuliani,” Sondland said.

That is the same day that the White House released a July call in which Trump pressed Ukrainian President Volodymyr Zelensky to “do us a favor,” leading Democrats to move to impeach him.

Pompeo has repeatedly denounced the impeachment inquiry and has drawn fire from former diplomats for not defending career employees who have been caught up in the scandal and at times personally attacked by Trump.

Pompeo, coincidentally in Brussels as Sondland appeared in Washington, ignored reporters’ questions on the ambassador’s testimony.