Khyber Pakhtunkhwa beat Balochistan by an innings and 122 runs 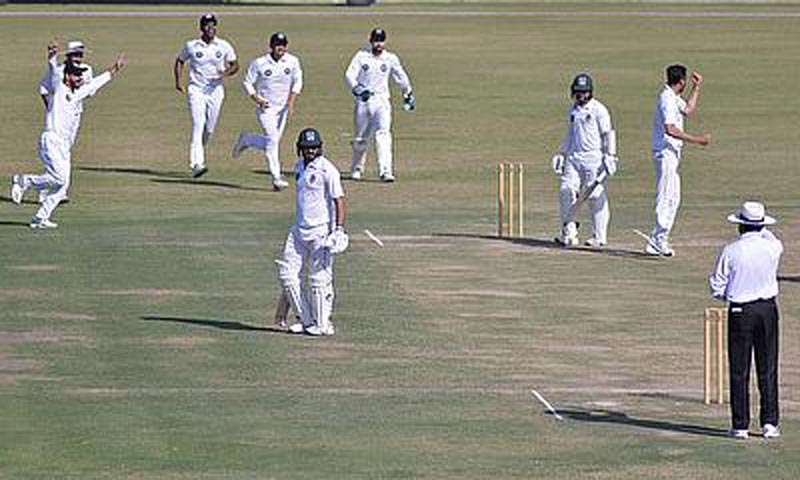 KARACHI: Khyber Pakhtunkhwa secured their maiden win of the tournament as they defeated Balochistan by a whopping margin of an innings and 122 runs at UBL Sports Complex, Karachi, in the eighth round of the four-day first-class Quaid-e-Azam Trophy on Wednesday.

After they were all-out for 146 on Tuesday in reply of Khyber Pakhtunkhwa’s first innings 385 all-out, Balochistan were asked to follow-on at the start of day three with a 239-run deficit. Junaid Khan (one for 17) and Usman Shinwari (two for nine) made early inroads which reduce Balochistan to 15 for three. The problems amplified for the batting side when Sajid Khan was introduced into the attack. The off-spinner ran through Balochistan’s middle-order, taking four wickets for 45 runs in 11 overs. Bismillah Khan (40) and Jalat Khan (22) delayed the inevitable with a 52-run partnership for the seventh-wicket. Once the pair was back in the pavilion, thanks to Sajid, Khyber Pakhtunkhwa captain Fakhar Zaman picked up last two wickets to finish the match. Imran Farhat was the only other batsman to register a double-digit score with 14 as Balochistan were all-out inside
36 overs.

Result: Khyber Pakhtunkhwa win by an innings and 122 runs.