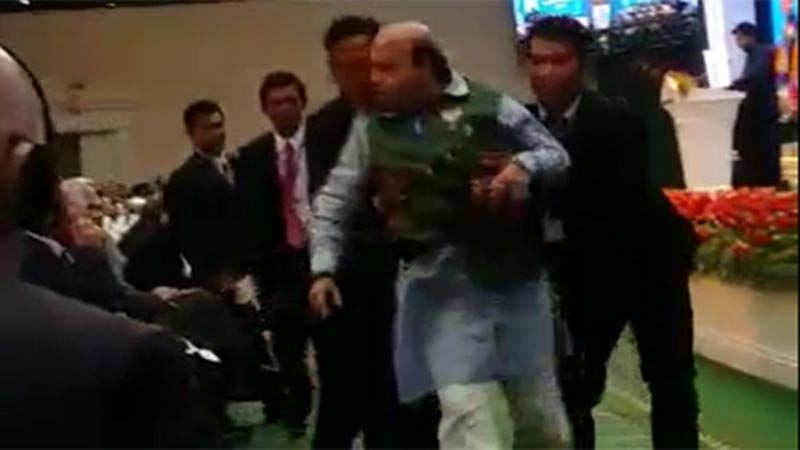 Security personnel at the Asia Pacific Summit, 2019, escorted out Indian politician Vijay Jolly after he angrily tried to disrupt the speech of National Assembly Deputy Speaker Qasim Suri on Tuesday.

Suri was speaking about Kashmiris’ right to self-determination at the summit in Phnom Penh, Cambodia, when an enraged Jolly – a leader of India’s ruling Bharatiya Janata Party (BJP) – got up from his seat and walked in front of the hall saying, “I want to protest.”

In a video clip, he was seen pointing and yelling at the summit’s participants sitting in the front row, when security guards came and took him outside the hall. Suri continued to speak despite the commotion.

“I want to direct your attention towards the human rights violations in Indian-occupied Kashmir. Almost 100,000 Kashmiris have been martyred and thousands are missing,” the deputy speaker said in his speech. “More than 11,000 women have been raped. More than 8,000 unmarked graves have been found [of people] affected by Indian atrocities,” he said, adding that the occupied territory is under a strict curfew and a communications blackout has been in place for the past 106 days. He also pointed out that the Office of the United Nations High Commissioner for Human Rights has recorded usage of pellet guns, extrajudicial killings and torture of civilians by the Indian forces.