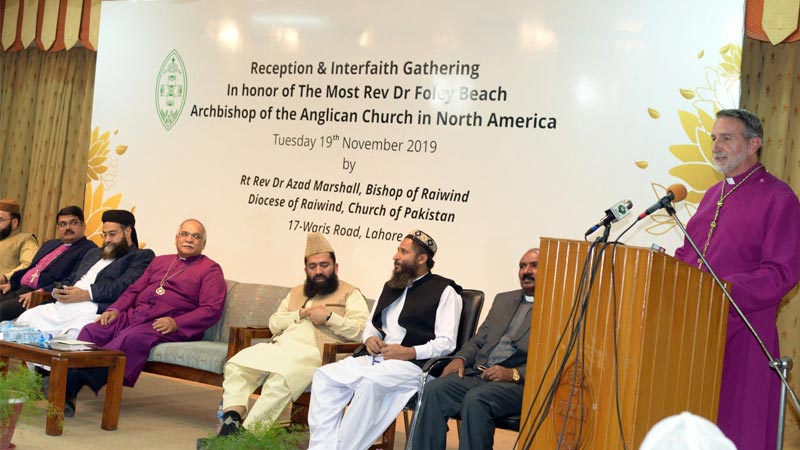 Anglican Archbishop of North America Most Reverend Dr Foley Beach on Tuesday emphasised the importance of love and tolerance to overcome the challenges of extremism and discrimination that plague the world.

He was speaking at a reception hosted in his honour by National Council of Churches in Pakistan President and Bishop of Raiwind Dr Azad Marshall at the Saint Peter’s School hall here.

At the start of the event, the moderator Pastor Emmanuel Khokhar welcomed the archbishop to Pakistan and hoped his stay would be a pleasant one and full of love.

Addressing the gathering Bishop Dr Azad called for peaceful coexistence of all religious and ethnic groups living in Pakistan. He said that both Christianity and Islam preached peace and brotherhood and called for promoting tolerance in Pakistani society.

PUC chief Ashrafi highlighted the services of the PUC and other Islamic outfits for the minority communities of the country, saying he was always there whenever a need arose. He also rejected the impression of a divide between the minority and majority communities, saying everyone was an “equal citizen” under the constitution of Pakistan.

Clerics Khabeer and Naqshbandi said Pakistan was a diverse society and people belonging to all religions live in harmony and stick together through thick and thin.

Thanking the hosts, Archbishop Dr Beach said he was glad to see the Islamic scholars propagating the need for an interfaith dialogue.

In a response to a question, he said the people in the United States have mixed views about Pakistan; however, hitherto he has found nothing but goodwill and love wherever he has gone during his two-day-old stay.

Answering a reporter’s question, Bishop Dr Azad expressed his concern over the population census conducted in 2018 wherein the Hindu community has emerged as the largest minority group in the country.

“We have our reservations on the conduct of the census. You will find Christians living in Karachi till Peshawar whereas the Hindu community is primarily settled in Sindh. Christians’ contribution to Pakistani society is well documented and we expect the Pakistani state to own its Christian citizens just as it is embracing Sikhs and Hindus,” he said.